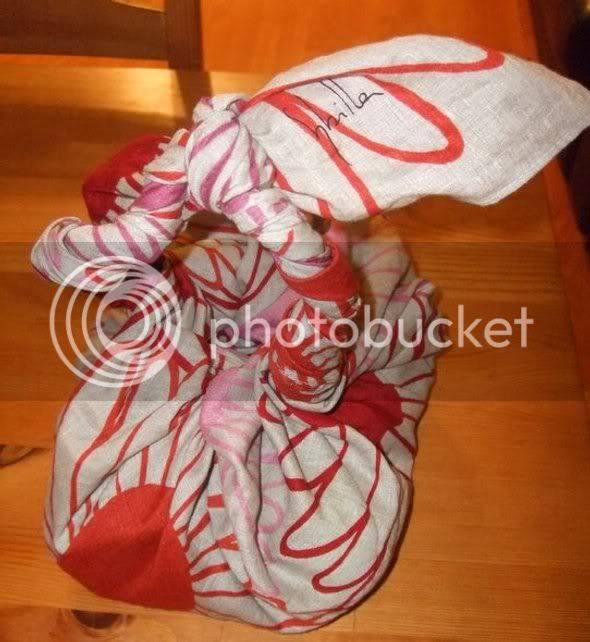 Lately, some grocery stores in Vancouver assume that I won’t be needing a bag to carry my purchases because I’ve brought my own. It’s a safe assumption to make most of the time, but one day I was carrying a dinky little purse that would never fit a bunch of bananas and yogurt, so I politely asked for a plastic bag. The cashier looked the other way and furtively tossed me a plastic bag, leaving me to burn in eco-unfriendly shame. It’s no big deal at, say, Safeway or Superstore, but most of the customers here have brought huge backpacks and/or reusable cloth bags with words like “organic” and “sustainable” emblazoned on them. While hurrying away from the store with my white plastic bags, I glared at my little purse and wondered why it couldn’t expand to fit the bananas or magically grow an extra compartment.

That’s when I decided to try out my new furoshiki — it’s essentially a giant square piece of fabric which has enjoyed a revival in popularity recently as the “Japan’s original eco-bag”. Traditionally used for transporting one’s belongings to the public bath (furo meaning “bath”), it’s now used as a grocery bag, tote, wine-carrier, gift-wrap, and often as a gift itself.

It requires some wrapping and knot-tying, which can be annoying, but the beauty of the furoshiki is that it is (by default) size-adjustable, and can to fit large purchases or folded and shrunk down to carry just a cell phone and wallet. It can fit snugly around almost anything you need to carry, including juice bottles and delicate cake boxes that can break while shifting around in a backpack. Furoshiki often come in insanely pretty patterns, like this sweet Canadian take on it by Vancouver Island-based artist Jenn Playford.

After watching a few how-to videos, I’ve been testing out different kinds of wraps at different stores, which not only saved plastic but also fetched a few compliments.

I’ve always been indifferent toward purses and bags (they’re simply a means of transporting objects from point A to B, so whether it’s a Gucci or a garbage bag is totally irrelevant), but the versatility of this wrap-bag has turned me into something of a furoshiki fetishist. While retail prices can vary from $10 to $650 (there’s a luxury niche for everything), anyone can make one of their own from sturdy fabric — it’s just a cloth square, after all.

Overall, I now have very few plastic bags around the house, which is great. On the other hand, the severe shortage of disposable bags for my garbage bins is not so great, but hopefully there will be a way around that problem too.

Check out more wrapping methods at the Japanese Ministry of Environment website.

Where did you buy the furoshiki shown in the pic? Love that fabric!

I actually got it as a gift from a friend in Tokyo — it’s designed by Sybilla, a Spanish designer who decided Japanese furoshiki was a darn good market. It’s around $30, in two colours: http://misuya.gozaru.jp/gohuku/shibila-huroshiki/sibilla2008-6.jpg

Store is in Tokyo, Kagurazaka district I think. Thanks for the comment!