It may be true that a Canadian Born Chinese (CBC) can never fully belong as a Canadian or a Chinese person; but this is only a partial view. The inversion of this claim is that a CBC is also not fully excluded from either group. Therein lies the key to understanding a CBC.

I don’t exist outside of two discrete categories as implied by the pejorative Cantonese term, jook sing mui, which translates roughly to “bamboo girl.” This term positions foreign-born Chinese in between two disconnected bamboo segments, unable to connect to either “world.” Yet it is also not accurate to say that I exist within the two categories   as suggested by terms like banana. Such terms presume that my identity can be split into tidy ratios, as if my yellow Chinese skin could conceal a white Canadian within. Nor do I perfectly synthesize east and west in some kind of celebratory, multicultural mosaic. For these ideas are founded upon the assumption that race and nationality are more stable than they actually are. They are inadequate models that fail to capture how CBCs can deftly navigate a world of shifting categories.

How many second generation Canadians have been sold a narrative of exclusion and internal conflict? How many were taught to measure out their identities in fractions – a few Chinese points for speaking Cantonese or taking Kumon lessons, a few Canadian points for watching MuchMusic or eating Kraft Dinner – only to find out those fractions never added up to a whole? How many CBCs have acted as their  own internalized immigration officers, racking up Chinese and Canadian points to gain status in the mythological states of national and racial identity? 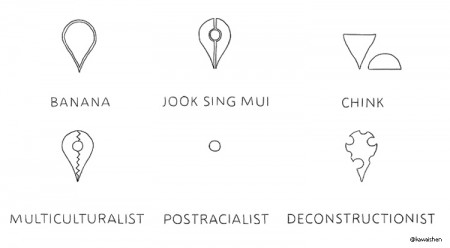 I refuse to police boundaries that make no sense to me. It is not racial and national categories that are stable and complete while I am the one who is torn between two worlds. I’m feeling just fine, thank you. No, I’m the one who is intact while these categories are riddled with holes.

I understand the desire to situate CBCs in relation to categorical boundaries. I understand the need to pin me on a map because it is so much harder to figure out what one’s relationship is to a moving target. But CBCs cannot be confined to one place; they are constantly renegotiating their position in relation to the boundaries society would have  define them.

“They know I’m from Canada, but I speak Japanese. And then they don’t know what to do with me,” a former boss once told me. He was a nisei, a second generation Japanese-Canadian, who conducted business regularly in Japan. “There’s a space that opens up between what they expect and who I am.” And what we do with this space, is our choice.

Terms like jook sing mui and banana taught me that the CBC category was a passive, negative space formed in between the positive spaces of Chinese and Canadian. I am more interested in the space my former boss described. It is dynamic, full of potential and defies being affixed to anything. Unable to remain safely ensconced within the boundaries of national and racial identity, I grew up playing in unclassifiable spaces of possibilities and movement that still continually open up before me. This can be disorienting, but also liberating. For the ability to fully inhabit the space between what is imagined and what is real, and to exercise agency within this space, are skills that can be learned.

We can practice skills that challenge the distance between expectations and lived experiences; contracting to become disarming and to put others at ease, or expanding to unsettle, just as my former boss used his fluent Japanese to destabilize others to his advantage in business negotiations. Instead of passively waiting for others to classify me, instead of sitting obediently in that spot, I can subtly guide others with my body language or word choice into placing me where I wish to be. When external pressures like the question, “Where are you really from?” or terms like jook sing mui threaten to collapse or solidify this space, we can train ourselves to reopen it and destabilize it again.

While applying these skills on others, CBCs can also apply them to themselves. Instead of merely assimilating, I carry this space to make myself welcome wherever I happen to be. In this way, I have carried the confidence to enter somewhere uninvited and do it in plain view. I now recognize that when I’m the only Asian in the room, or the only Canadian native, I can take it upon myself to take up more space for myself. And I will make myself comfortable as someone who can belong without belonging.

Instead of simply seeking protection or meaning from boundaries that can never circumscribe lived experiences, I propose learning to relish one’s freedom from them and to value the ability to transgress imperfect categories. How much easier it is for a CBC to cross the line when she is willing to embrace the chaos and contingency of existing in the here and now. How much easier it is for me to evade capture when everyone else is still looking at the wrong maps, maps with clear, discrete borders demarcating imaginary territories. I am not like you, but I am also not not like you; now catch me if you can.

Because it’s almost always the case that the lines I’m crossing are only being crossed in someone else’s head. And because by the time someone realizes that there’s something not quite right about me, that I don’t fully belong, I’m already somewhere else. In fact, if you think about it, I was never really there.

Kawai Shen is a Canadian Born Chinese writer and cartoonist based in Toronto. You can find her online at cutejuicecomics.com or as @kawaishen on Twitter.

I enjoyed this piece. Thanks for writing it.