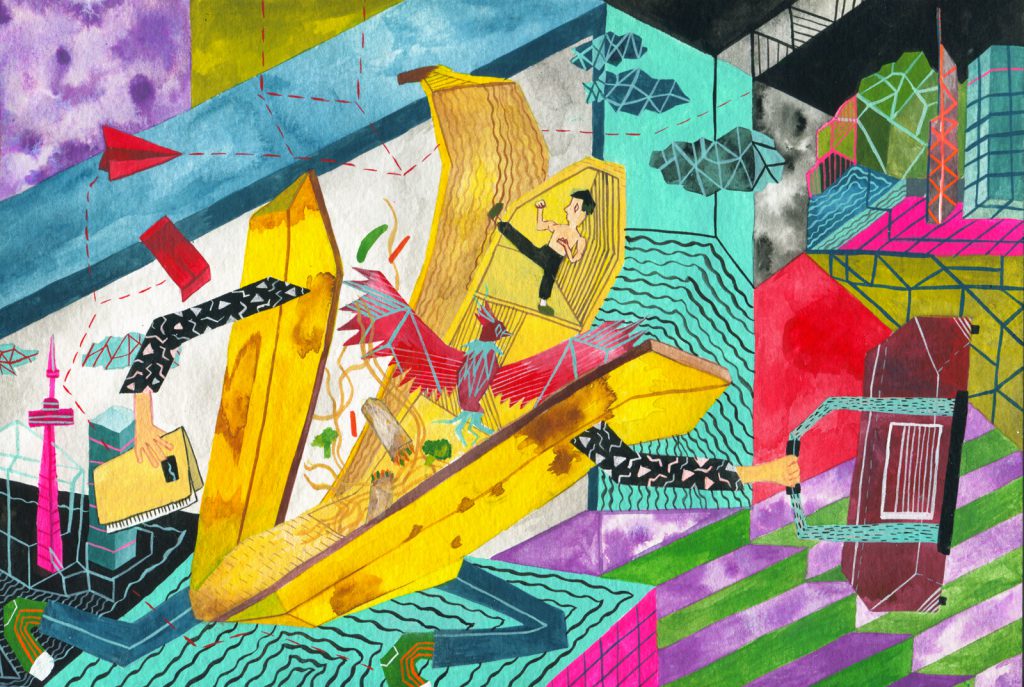 When I was born one thing was clear: I was a banana.  Not literally as in the fruit high in potassium and fibre, but as in I was a Chinese person born in the west – specifically, Toronto, Ontario, Canada.  And at least I grew up in a multicultural, Chinese-centric suburb of Toronto, which was Markham for my family and me.  Still, despite the best efforts of my parents and of myself to learn and incorporate all of the traditions, language, and customs of the Chinese people into my existence, when ‘old-school’ Chinese people born in Hong Kong, Macau, or China saw me, they thought only one thing: ‘He’s a banana’.

It’s hard growing up feeling like you’re yellow on the outside, but white on the inside – hence the unfortunate term ‘banana’ for describing Chinese people born in the west.  But I am Canadian and Chinese.  The best of both worlds became engrained in me, and walking the fine line between Canadian and Chinese cultural values became second nature.  After all, my full legal name was Liam Chui Han Luo.  Luo was my family name, and Chui Han was my Chinese name written out in English letters, to become my western middle names along with my first name, Liam.

My parents taught me to read and write my name in Chinese characters, and helped me to learn several other characters too, such as numbers and common words.  I could speak passably fluent Cantonese, and understand most of the dialogue in Cantonese movies and television shows.  Watching Kung Fu and martial arts movies was my favourite hobby, next to watching beautiful Asian actresses.  My iPod had as many Chinese songs on it as it did western ones.  Every time a rock song by U2 or Pearl Jam came up, the next song in my playlist would likely be by Faye Wong or Teresa Teng.

I was now twenty-five years old, and a waiter in a Chinese restaurant that served mostly westernized food.  Two university degrees were in my name, one in Arts and another in Education, which led to my current job.  Becoming a teacher – a full-time permanent one – was an unfulfilled dream.  Five substitute calls came to me in the past two years, and with the bills mounting and my sanity falling, I started working for the Lo Ban (boss) and Lo Ban Leung (boss’s wife) at the Ho Ho Hoi Sum restaurant in Markham. 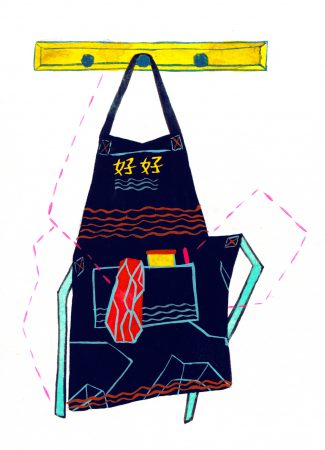 They were great to me, treating me like a son.  They fed me well every time I worked, and a steady wage and good tips came my way.  The debt from my university degrees slowly disappeared.  A small apartment was my place to call home.  Every month a bus pass was affordable.  I was alive, but perhaps I wasn’t living.  And that exact thought is what made taking the first step on the long road home possible.

“I’m sorry,” I said, dropping a plate to the restaurant floor.  The plate shattered into pieces, and the egg rolls and chop suey it had been holding now decorated a tile in a mix of oranges and reds.

“You’re firing me?” I answered in shock.

“This has nothing to do with you, Chui Han, because you are a truly great person, but for your own good: yes, I am firing you.  Some people are meant to be certain things, and for a few people, they were meant to be a special thing.  You were meant to do something more than be a waiter.  I’ll be here the rest of my life because I need to be here, but you don’t.  You can go anywhere, and achieve anything, you want.  I know it’s difficult to do, but leaving this place will be one of the best things that could have ever happened to you.  Trust me!  One day, you will say to yourself: ‘Wow, I’m glad I left that old spot behind, because if I hadn’t, I never would have achieved what I achieved in life’.  When you think that beautiful thought, I will be thinking it too, and I will be so proud of you and happy for you.”

“My husband is right,” said Lo Ban Leung, as she placed her hand on my shoulder.  “This place is too small for you.  You need to spread your wings.  There’s an old Chinese saying: ‘A thorn bush is no place for a phoenix’.  You are a phoenix, Liam, and you need a special place to grow and to show your wondrous feathers and light.  We’re holding you back here.  You need to do much, much more.  You will always be welcome here, Luo Chui Han.  You are our son by choice.  We appreciate all the help you have given to us.  Here: take this lucky money for your journey to better days.”

Lo Ban Leung handed me a red pocket money envelope that Chinese elders always gave to the generation below them.  It was called ‘Lai See’.  I opened the envelope.  Inside it was three hundred Canadian dollars!

“I can’t accept this!” I said, pushing back the envelope.  “And I don’t want to leave you or this job.  I need to pay the bills.”

“We all need to pay the bills,” replied Lo Ban Leung, handing the lucky money back to me.  “But it’s how we pay them that matters the most.  There’s a career out there that will be your calling.  That path will pay the bills.  And you can accept this Lai See.  In fact, you must!  It would insult us if you didn’t.”
She was right: I had to accept the lucky money.  I said “Do Jai” to Lo Ban and Lo Ban Leung for their gracious gift to me.  Do Jai was the formal way of saying ‘Thank You’ in Cantonese, as opposed to ‘Um Goi’, which was the casual way of expressing gratitude.

“Have a good journey, Luo Chui Han,” said Lo Ban, shaking my hand.  “We’ll keep our eyes and ears open for the big news you’ll make in the world!”

“And anytime you need to eat food, you know where to come,” Lo Ban Leung smiled and nodded.

I thanked them again and hugged them tightly.  My former apron was soon hanging on a peg and the restaurant’s doors closed behind me.  After arriving home, via e-mail, I finally accepted a job offer presented to me a week ago.  The job offer was to become an English teacher in Hong Kong.

After sending the e-mail, I told my parents my decision; they did not want me to leave Toronto much less Canada, but they understood my feelings – my dream.  I packed all of my things that same night, and gave away the rest on the curbside.  I informed my landlord my apartment could be offered to someone new by the week’s end, for I was about to take the long road home.  And by ‘home’, I meant the special place where I could finally become who I was meant to be.

Kevin Wah Kin Wong is of Chinese descent and born and raised in Halifax, Nova Scotia, Canada.  His lifelong dream is to have his many books become published and known around the world.  He has earned two Degrees, BCSc and BScN, from Dalhousie University.  He is also a Registered Nurse (RN).

Where might I find the rest of this story? It’s intiguing to me that Kevin who is from Halifax (where I am from as well) decided to make his character grow up in Toronto.

This is a good excerpt! Today, there are so many people(multicultural family) who are exactly like Liam Luo all around in Canada(the amount of those people is consistently increasing).
Therefore this kind of excerpt makes(or help) those people to think(or to find) about their ‘dream’ again. Overall, I like this excerpt story because it is an interesting topic!

Let me say this: Kevin is a writer whose work should have been recognized and published years ago. This is a perennial problem in the literary world. Yet another artist not getting their chance. But with Mr. Wong, he has insights into both Canadian and Asian culture, and can bridge that gap so easily with his words. Chinese civilization has flourished for over 4,000 years, but it has not received the attention it deserves here in North America. Their laborers built both the Great Wall and the railroads of the Great West, yet their modern artistic voice has been stifled. Amy Tan opened a door for Asian writers, and that needs to be expanded in the future. Please: Allow that to continue with Kevin Wong. He has something to say which NEEDS to be said. To ignore that would be yet another literary tragedy, and honestly, hasn’t there been enough of that already?

Don’t just look at the words. Look at the individual behind them…

Vincent Spada introduced me to this work. I’m thrilled that he did. I enjoyed reading.
Best of luck in Hong Kong…and in getting your books into the hands of readers.
Jana
Author, My Half of the Sky (2006), Blossoms and Bayonets (2012)

Like many other Canadian Born Chinese, I can relate to the main character! Looking forward to reading the rest of the story!

This is a fascinating story…I’m anxious to find out what happens next! I’ll be emailing the editor to find how I can find out. Where can I find Kevin’s other books/publications?
Judy