‘The Elements of Music, or What I Learned from My Piano Lessons’ by Li Charmaine Anne9 min read 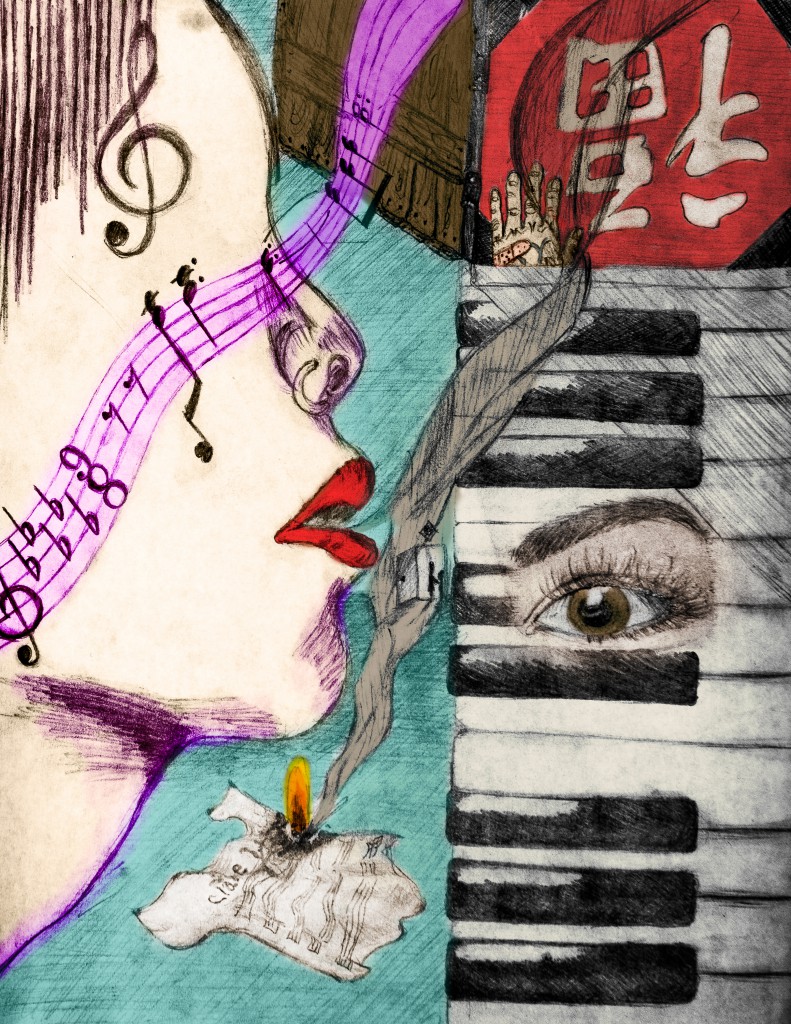 You’ve never played pentatonic scales on a guqin or pipa, but you do have an Associate piano diploma. On cool summer nights, you even make it a habit to strum a guitar at campfires. Western music, you believe, is a book you’ve read in depth enough to declare yourself an expert. It is a book of many chapters, but if you were asked, the building blocks of music are surely harmony, rhythm, and melody.

Harmony is the CDs you listen to in the family sedan, in the back seat during weekend grocery runs to Richmond. Dad air-conducts. Mom turns the volume knobs right and left as required. The car plays mostly Mozart and Tchaikovsky, with some Bach, Vivaldi and Chopin sprinkled in. Like leaning your head into the bent of the seatbelt, Mozart’s “Piano Concerto No. 21” cradles you to sleep as you cruise over the Fraser River, and Tchaikovsky’s “1812 Overture” makes you dance out of the doors, up and at attention. That Overture is a love you share with your father: you both understand how the first two minutes of layered cello, wrapped in a thick harmonic fabric, are the best two minutes. Your father shows you photos of himself with his university operetta cast—there’s him, crouching in the front of the cast with a proud smile. Your mother is elsewhere in the chorus. Somehow, whatever harmonized their relationship—mutual fatigue at late night rehearsals? Witty conversations slipped between ticket-selling afternoons?—made you. It’s funny, your audio preferences as an adult are so disparate from theirs, like when you pretend pretension by hanging around uptown theatres moshing to obscure local bands. You still hear your mother hum the harmonies of folk songs and madrigals when you walk past the bathroom sometimes, a taste of nostalgia hiding in her throat. At midnight, your father taps on your door and complains that the cacophony of synth pads, guitar riffs, and bass lines growling and grinding in your room is too raucous for a neighbourhood of retirees.

Rhythm is discipline, the discipline it takes to learn to twist and leap and roll your fingers across eighty-eight black and white rectangular buttons. Rhythm keeps you home and makes you turn down play-dates as a tween, and it is a rhythm of habit that keeps you sane by dividing hours-long practice sessions into smaller increments. You vary from playing a measure over and over, to anger-releasing push-up breaks, to energy-replenishing-chocolate-bar-breaks, to I-want-to-lie-down-and-kill-myself breaks. All for the especial privilege of thundering out Chopin’s “Fantasie-Impromptu” in any room with a piano and impressing all within listening vicinity—mostly adults. any kid present twists uncomfortably in their chair knowing their mother will compare them to you. Because, while other children curse their parents’ souls and quit, you chose this path for yourself. Unlike them, you appreciate the fatigue, the muscle cramps, the hours lost. Your father says that once you conquer this black-and-white behemoth of an instrument you can conquer anything, and you believe him to your bones. Your final exam is hard, but the exams and contests before that, including paper exams on harmony, counterpoint, history, and analysis, are harder. You receive your Associate diploma before receiving your high school diploma, and perhaps piano helps you get into university.

But then you become old enough to dare ask: “Is this an Asian thing?” Because really, you’re just one musical instrument-playing, acne-ridden, spectacle-wearing Asian immigrant child out of thousands. Thousands who become better than you, like the boy you grew up with down the street. He’s playing with the national orchestra while you play with your four white walls. And what about all those kids in Europe, what do they do? All the world’s symphonies and concertos, operas and musicals, come from that continent, yet all you ever seem to see are prodigies with straight black hair, Anglicized surnames, and an ambitious mother never too far away. Maybe you’ll go to France one day, to hometowns of composers like Ravel and Debussy, Fauré and Satie, artists you learn to admire after all exams and the contests and the hours spent perfecting “Fantasie Impromptu” are over. So, as you mark theory homework for neighbourhood kids, you wonder why it’s such an overdone trope for East Asian parents to make their kids learn violin and piano. Is it a brand of internalized racism, of longing for the “civilized west”? Or is it for training of the mind, to “conquer anything,” as your father still says? White people have hockey and basketball, after all, so maybe that leaves Asian people with piano and violin.

You think back to all the kids who played instruments with a feverish ambition when you were growing up. Well, most of that feverish ambition was not theirs but their parents’. Sometimes, when a song isn’t working out, you wonder how much of your passion is yours. You’ve cursed music before, when your arms had streaks of pain shooting through the bone, when you knew, looking at prodigies on the internet, that you really weren’t that good anyway. But the pain became a part of your skeleton, and you barely remember not knowing how to read music, the same way you barely remember not knowing how to read. When the diploma and frame arrive in a package outside, your parents proudly hammer it to the wall above the piano in the living room. It still hangs alone on the white wall, but you don’t look that far up whenever you pass by.

Two words knock around in your head: for what?

Maybe you did it to impress adults and to make the family proud. To have a back-up career. Or because you started, went past the point of no return, and had to get it over with anyway.

You close the piano lid. When the exams for the neighbourhood kids are over, you don’t mark the homework for their next one. Even though you’d be paid as someone with a diploma, you’d rather they bump each other on scooters than do homework that isn’t even for school.

But music lingers. After all, melody is desire. It is pursuing and longing for something pure and true and meaningful that you want but can’t name. You ponder and paw for melody especially now in your twenties, when words like “degree” and “career” penetrate your inbox. This is why the piano stands regal in the living room with a dusty veneer while the guitars and recording software in your room, earned through a string of part-time jobs, are polished and new. In the evenings after an eight-hour workday, when you collapse your bones upon a chair, you begin your search for melody. You pick up a guitar and sing without shame, trying the taste of notes and syllables, pausing to lean over and pen down a couplet with questionable rhyme. You curse your incompetent short-term memory as you struggle to record and write and hold on to a brilliant tune before your distracted mind loses it. What you want most is melody. Words and harmonies are ornamental to you, but melody is your star actress, the beautiful lead that vibrates the insides of your audience in a dazzling performance. After all, through all the musical phases of your teens, Mozart, the king of melodic lyricism, remains the only human who can make your body shake. When the “Gran Partita” begins, a lone oboe pierces through a lull of gentle brass, halting spacetime with its voice. Halting your thoughts.

Is this what drugs feel like? You close your eyes and music becomes a lucid dream. It crosses the border from the theoretical to the physical; it becomes audial and visual. Pumping rhythms are stories of skyscrapers that build themselves up and up and around you into the sky. Cityscapes pulse and vibrate as they transform in and out of differing shapes and patterns. And you’re flying, flying through a surreal world that you and sound continuously create deep in the crevasses of your mind.

So you look at the eighty-eight keys in your living room and ask a question you’ve asked yourself since you were a kid learning “Mary Had a Little Lamb.” Will you ever find the one melody that is yours, one that explains?

Your colleagues have all gone home. You shut down the computers, tidy up the counters, turn lock in key. You walk down silent, dim hallways where the humming of background machinery is the only music. You jump on a bus and sit down, watching the trees go by at the same rhythm as the music in your headphones. You come home and toss your keys into a basket. Drop your heavy knapsack upon the floor. You stretch your arms and wander into the dining room. The house is empty. The house is yours.

It’s a fair day. You twist open the blinds and the last streams of sunlight filter through. Commuters have left the main road nearby, so the silence lets birdsong in. You lift the lid off your piano, sweep off the burgundy felt covering, and sit down at the bench. You lay your fingers on the keyboard, gently, almost with a flourish; it’s muscle-memory from all those competition days, so who can blame you, flourishing within your private home? One breath—and then you begin—the first two pensive notes of Debussy’s “Claire de Lune.”

Your piano teacher once mentioned that she didn’t allow too many students to attempt this piece because it was not easy, both technically and emotionally. You’ve always been a little smug about this. But that was years ago, and this is now. You guide your fingers through the one piece you have practiced the longest and abandoned the latest, and despite a few initial hiccups, its melody has never left your tendons as your fingers craft out the notes. They know how to put slightly more pressure on the fingers that outline the melody. They know how to tumble like gymnasts across the keys in the middle un poco mosso section. And in the theme’s last re-statement, you meet your favourite part: an intentional, extra C-flat in the theme that discerns it from the introduction. You find this one note—able to convey just the right amount of nostalgic finality—a true stroke of genius.

For once, you stop obsessing over your life and think of Debussy instead. Not as a French composer, but as a man gazing alone at the moon with manuscript paper open on his lap. Just like that Chinese poem your parents quote now and then, that one by Li Bai:

Moonlight shines before the bed:

Can it be frost upon the ground?

I lift my head and see the moon—

Lower it, and think of my hometown.

Li Charmaine Anne grew up and writes on the unceded territory of the Musqueam. She is an undergraduate student in the University of British Columbia Creative Writing Program. Her writing focuses on the intersections between identity, music, and growing up on the Pacific Northwest. Read more about her here.

The artwork for the article, ‘Breathing the Elements’ was specially designed by Emily Kuang and Vincent Chan-Ying.