“What’s In a Name?” by Bianca Weeko Martin6 min read 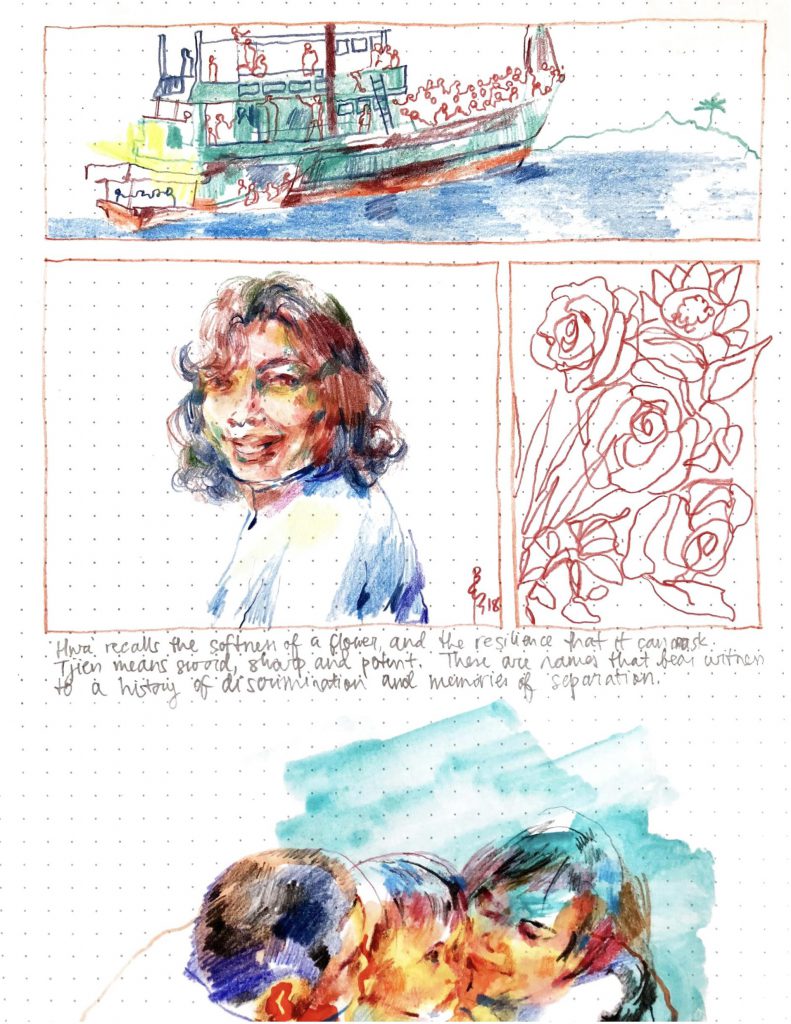 Bianca means white. My parents gave me this name because of the colour of my skin — or, more precisely, the relative lightness of my skin compared to all the other babies in a Jakarta hospital in 1996. I can picture the room, which in my mind is a field of little baby beds—a body, mine, swaddled in clinical fabric and fleece— and the face which sticks out pale and strange among a sea of tan. The babies that surround me have sun-kissed cheeks before the sun even had the chance to meet them. At the age of four, we moved to Canada and my early life in Jakarta receded into the dream of some tropical faraway world.

My mom’s name is Wawa Rosiana Tjong. As a child I hated it. I thought the sound of Wawa was strange, and saying it only further outed me as an immigrant in front of the Scarborough kids with whom I was so desperately trying to assimilate. When asked about my mother’s name I would, quite hilariously, reply with a nervous “Florentina” — her Catholic baptismal name. Wawa is actually a simplified version of her full name, which is “Tjien Hwa” (劍 华); Hwa-Hwa becoming “Wa-Wa”—I didn’t understand any of these seemingly arbitrary naming conventions back then. While I grew up speaking Indonesian with friends, family, and strangers, I felt confused in the late hours at home when I heard my mom and her siblings speaking a language I did not recognize.

I thought the sound of Wawa was strange, and saying it only further outed me as an immigrant in front of the Scarborough kids with whom I was so desperately trying to assimilate.

Tjong is my mom’s surname. That’s probably Zhang in Mandarin. I have always found it interesting how fluid family names can be outside the Western world, either taking the form of something assigned by a colonist or, as in this case, altered to suit the linguistic needs of the ruling power. Family names that read like palimpsests of power relations rather than inheritance. In Indonesia, ethnic Chinese people who had been living in the country for centuries were forced to change their surnames to those which better matched the Indonesian language under the Suharto regime. My mom’s surname, however, had already undergone Dutch colonial romanization before Suharto’s New Order period and perhaps for this reason was exempt from the demands of the name change policy; although carrying such an obviously distinct family name at this time in Indonesia was cause for threat too.

Hwa—as in Tjien-Hwa—typically means flower, delicate and beautiful. In my mom’s case, it instead recalls a ship called Chung Hwa. My mom was born in 1966, the year Suharto took power. The Chung Hwa was packed with Chinese-Indonesians returning to China in the wake of this ominous political change. On board was my mom’s eldest brother, aged seventeen, whom she wouldn’t meet for several years. It didn’t even register to me that my mom was part Chinese (and that I, in turn, was Chinese too) when I was growing up, which probably says a lot about the internalized inferiority bred in the environment within which my mother and her siblings grew up. I remember one night driving home from the airport with my parents; I was eighteen and had just come back from a summer spent travelling by myself in Bali, and unclear about the dynamics of my own cultural identity I had repeated to my mom what I‘d heard over my extended stay among Indonesian locals: did you know that the Chinese in Indonesia are greedy and materialistic and take up positions of influence in a country not their own?

“When I was growing up in Indonesia, I had to have a mark on my identification card that separated me as being Chinese, do you know how hard that was?” she retorted with a strange and bottled-up agitation.

As I, on the other hand, grew up and into the world of Western academia, I developed a system of values that seemed to conflict with my respect for my mother. Through elementary and high school, I excelled in classes and was taught to praise quantifiable forms of knowledge and intellect. In architecture school, I learned to love assertion, aspire to boldness, and take up space as a Young and Exemplary Independent Woman, who could lead and innovate in a field where generations ago only men dominated. My female role models were those who read and researched, could debate eloquently, and typically ran their own firms and finances. In contrast, my mom began to shrink from supreme matriarch to a simple woman swept up inconsequentially in her husband’s great voyage to Canada. My mom was infinitely loving and good. But I couldn’t talk to her about the new and exciting things I was learning. And at this I felt frustrated: frustrated with her, and frustrated with who I was becoming and what place I might have in my own unit of society—if my family seemed to function so perfectly at the reigns of this immaculately feminine mother-figure, what could I ever offer as I strayed farther and farther from the model set forth before me?

My mom was born in 1966, the year Suharto took power. The Chung Hwa was packed with Chinese-Indonesians returning to China in the wake of this ominous political change. On board was my mom’s eldest brother, aged seventeen, whom she wouldn’t meet for several years.

I thought of my mom as weak because she was loving, and dumb because she never patronized others. But she speaks four languages and worked every day to support the higher education that had been out of reach for her. Everything I love about myself, and that in turn other people are drawn to, I’ve learned from her. She lived in a political environment which practically taught her she should hate herself, and she became a more adaptive and loving person as a result. Most people placed in similar situations would only grow more spiteful and closed. My mom’s maternal family has Hakka origins, and this denotes strength and hardiness, the ability to persevere historically in poor agricultural conditions, to protest even traditional foot-binding. My mom, Wawa Rosiana Tjong: part-Javanese, part-Hakka warrior woman; Wawa, falling in love with a foreigner and moving halfway across the earth to a mid-sized town in Canada, braving the new sensations of cold and anonymity, prizing nothing more than her children and the talents they hoped to nurture.

Even now, living far from home, I still have to remember to be patient, to step back from “the canon” and remember the numerous and varied ways in which intelligence and strength manifest themselves. The transcendent beauty of mothers, of the feminine, is that their energy lies in things impossible to measure and often easy to dismiss. Sometimes a name is enough to remind me of all these things. Tjien means sword, sharp and potent. Hwa recalls the outward softness of a flower, and the resilience that it can mask. These are names that bear witness to a history of discrimination and memories of separation, not only in their meaning, but also the cultural vandalism of their letters. Bianca is simply something that came out of all this, a bit of white that didn’t completely belong, a blank slate now rich with all the lessons of her mother and the life she lived and gave.

Bianca Weeko Martin is an artist and student of architecture, based in Toronto but enamored with the world. She was born in Jakarta and is of Indonesian, Filipino, and Chinese ancestry, and Canadian nationality.