“If Photographs Could Feed You” by Kailin Yang8 min read 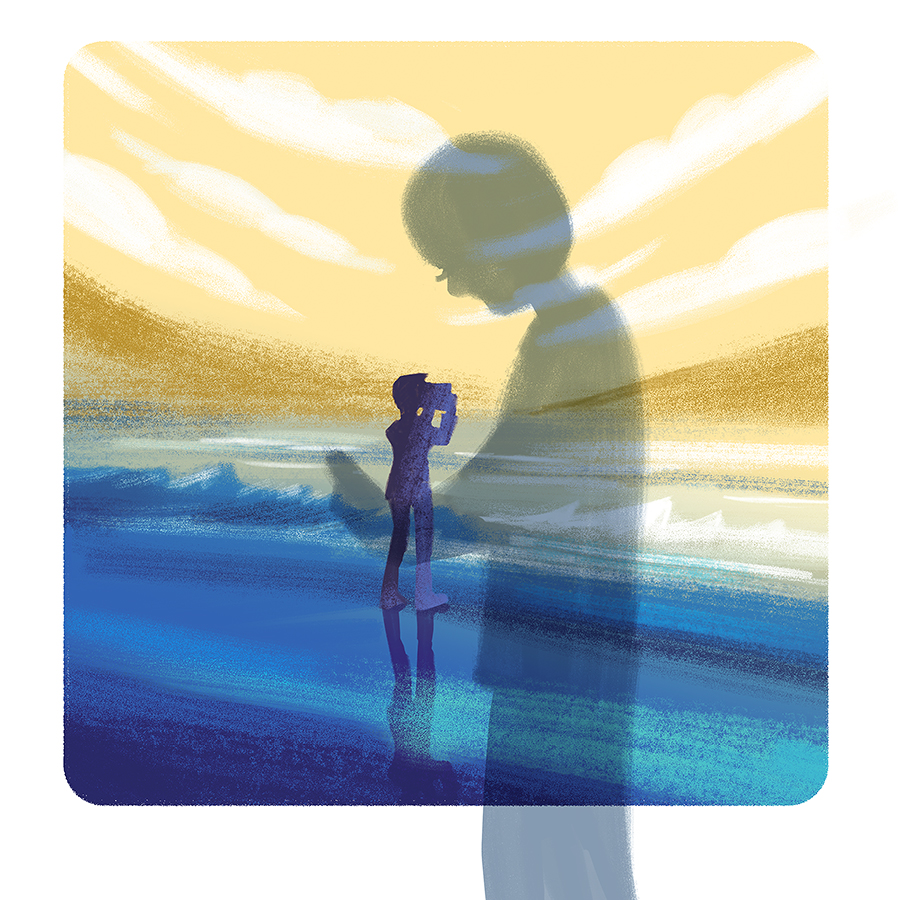 Every morning, whether the sky is a cloudless forget-me-not blue or a grayscale thunderstorm, my older brother Davy opens his bedroom windows and takes a photo. On his happiest days, he opens all the windows in the house, as if the fresh air could spirit his infectious grin down the streets and past the horizon of dirt brown suburban roofs.

Birdsong, sunlight, and the sharp scent of fresh pine snake through the open windows of my room, clues that Davy snuck in while I was asleep. Davy is like the dust motes in a shaft of sunlight, swirling and shimmering, inviting you to dance, then disappearing into the shadows the moment you reach your hand out.

Davy’s bedroom is beside mine, but the beige walls are too thick for me to hear him breathing. Even if I hold my breath.

This evening Davy will graduate high school, and in two months he’ll leave for university in Vancouver. The beige walls will remain silent, but the windows will no longer swing open in the mornings.

Davy and I have had these bedrooms for the past seven years, ever since the day our parents finally saved enough for the down payment on a thirty-year mortgage. The Canadian dream, my parents called it, the day they got the keys to this double garage house beside the pine forest. We were finally at home in the land of blue skies, clean air, and excellent educational institutions.

As immigrants from the Chinese countryside, my parents paid for their Canadian dream with long shifts at the local Chinese supermarket, doing menial labour because the government refused to recognize their university degrees. My parents hoped Davy and I would become doctors, lawyers, engineers, or accountants so we would never have to work at a supermarket.

But Davy wanted to be an artist. From the moment he first held a crayon, he had an uncontrollable urge to capture the world in images. He doodled on the back of newspaper flyers, in the sandbox at the park, and all over his homework. Mom screamed when she saw his math workbooks covered with sketches of animals where there should have been numbers. She bought Davy a new workbook, along with a sketchbook, to ensure his sketches and numbers went in the right places.

In addition to doodling on newspaper flyers, Davy circled the cameras advertised inside them, drawing stars around the ones he wanted most. Each week, mom and dad threw the flyers in the recycling bin. Each week, they transferred a few dollars from the savings account intended for the down-payment of their Canadian dream into a savings account for Davy’s tenth birthday present.

All this occurred while we were living in a cramped townhouse with thin walls which allowed the neighbours’ arguments to bleed through. Yet the neighbours were silent the sunny afternoon Davy tore open the red wrapping paper and found a DSLR camera underneath. His face split into the widest grin. From that moment on, he took his camera everywhere.

The one time Davy let me use his camera, I almost scratched the lens. When I leaned in to take a close up of some pine needles, the camera slipped out of my seven-year-old hands. Only the neck strap saved it from tumbling to the ground. Davy never let me touch his camera again.

Davy’s doodles were gradually replaced with printed photos and scrapbooks. His crammed bookshelf contains scrapbooks with titles like: Today I Found, Imagine This, Goodbyes.

The Goodbyes scrapbook contains the last photo he ever printed and brought home. A family photo, taken right after his high school graduation. He brought his tripod to commencement so he could set his camera on a timer to take a photo at the precise angle and location he wanted. After posing for the photo, he took off his graduation cap and announced he’d bought a one-way ticket to Ljubljana. The flight was the next day.

Instead of returning Davy’s smile, mom and dad remained frozen like they were still posing.

“Eastern Europe,” Davy said. “It’s the capital of Slovenia. The mountains and lakes there look like something straight out National Geographic.”

“If you want mountains and lakes,” dad said, “go to China.” “I’ve already been to China. I want to go somewhere new,” Davy replied. Mom said, “How long are you going for?”

Davy put the lens cover on his camera and knelt down to disassemble the tripod. “A while.”

“But you have to come back before university starts.”

“I’m not going to university.”

“I deferred my admission.”

Dad said, “Davy, you can’t make a living from photography.”

“Don’t worry. I’ve got a plan.” Davy finished packing the camera equipment in his black bag and walked to the car. “It starts in Ljubljana.”

The next morning, Davy tried to take a cab to the airport, but mom and dad insisted on driving him. The whole ride, they pleaded with Davy to reconsider his decision. Concerns about throwing away a bright future did nothing to erase the determined smile on Davy’s lips.

Dad sighed and shook his head. “When you run out of money in the middle of nowhere, don’t call us for help.”

At the airport, Davy slammed the car door. With his camera bag in one hand and suitcase in the other, he walked through the automatic doors of Terminal One without looking back.

It’s been three years since Davy deferred his admission to university and those automatic doors never once reopened to welcome him back to Canada. All the savings from his part-time job at the art supplies store, which he claimed were for university, went towards plane tickets, hostels, and exotic foods.

Davy’s Instagram feed is a mosaic of cloud-capped mountains and golden beaches, wildflower meadows and cobblestone streets. A million foreign mornings through open windows. Sprinkled through Davy’s feed are snapshots of people. Laughing. Gazing into the horizon. Dancing in the streetlight. Davy has a knack for arranging pixels to capture the moment stories spill through strangers’ eyes, a gift for transforming photographed clients into familiar friends.

My parents print and frame the photos they like best. Our house’s beige walls have morphed into a colourful tapestry detailing Davy’s journey. After touring Eastern Europe, Davy hitchhiked his way south to Turkey, the minaret filled gateway between the East and West. He then followed the footsteps of ancient Silk Road explorers through central Asia, a land of deserts and mountains and mosques, until he reached the green mountains of Northern China.

The morning of my high school graduation, I catch mom pressing her hand against the photo of Northern China as if she could step through the walls and onto the mountains, where she’ll find Davy smiling behind his camera lens. Dad wraps an arm around mom’s shoulders as tears run down her cheeks.

That night, I dream of trekking a mountain like the ones in Davy’s photograph. Davy, with a black bag of camera equipment strapped to his back, is kilometres ahead on the dirt path. He pauses every few steps to angle his camera for a new shot.

Even though I run faster than Davy walks, he gets further and further away. I shout until my voice becomes a whisper, but he never turns around.

If only I’d ignored my parents when they insisted a part-time job would get in the way of my studies. Then I’d have the money to look for Davy.

But even if I could visit all the places Davy’s been, I can’t cross the terminal doors as he did. Each time I consider leaving, I recall mornings where the house’s windows were closed and everyone, save mom, was asleep.

When mom had bags under her eyes from late night shifts at the supermarket, she still woke before sunrise to prepare breakfast. She insisted Davy and I needed to eat well to succeed in our studies.

Once I graduate university and have a stable job, I’ll bring my parents to all the places Davy photographs. If we retrace his footsteps for long enough, perhaps we’ll finally catch him in some countryside village, chasing a shot during the golden hour.

If our family reunites, face to face, for even a few minutes, perhaps I will no longer have to listen to my parents cry when they think I can’t hear them.

Davy kept the promise he made before he left. Even though his photographs haven’t transformed into a consistent cash flow, he’s never asked our parents for money. He makes enough to live, most of the time. But when he doesn’t, he sleeps on the streets, curled around his camera. Sometimes he roots through dumpsters for dinner because he can’t afford three meals a day. Sometimes he gets so caught up chasing the perfect shot, he forgets to eat.

He says his photographs keep him full, but the angles on his jawline are sharper than they used to be and his smiles are smaller, his laughter softer. If he took off his shirt during our monthly video calls, I swear I’d be able to count his ribs.

His camera is the only thing that remains unchanged. There’s not a single scratch on it.

Kailin Yang is a Chinese-Canadian writer born in Guangzhou and raised in Guelph, Ontario. She is a creative writing major at the University of British Columbia and hopes to become a novelist one day. “If Photographs Could Feed You” is her first published short story.

A very different approach to a very conventional topic such that the whole article was refreshing to me. I would like to read more stuff from the author as it is very interesting.

This is one of the best artwork that I have seen in such a long time. I just hope that he puts them in a gallery so that people can buy the pictures that he has done to know.