Food & the City is a new series of articles related to food and culture in Vancouver, and possibly beyond. The first article in this series looks at Sai Woo in Vancouver’s historic Chinatown, delving into the stories behind the food. Special thanks to Salli Pateman, owner of Sai Woo, for all of her help. 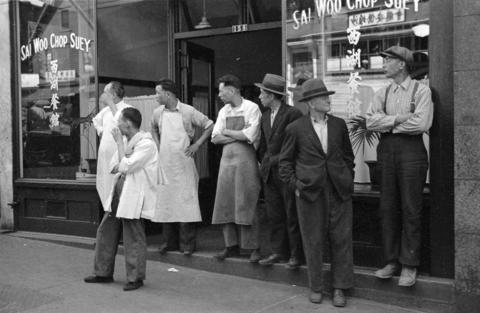 “Sai Woo means West Lake,” Salli Pateman remarked as she pointed out a gold leaf pagoda painted at the entrance to the restaurant, while preparation for the evening’s meals began in the open kitchen at the back. Work begins early at Sai Woo -meals are prepared well in advance of the first evening customers when the doors open for dinner. “West Lake Park has influenced poets and artists throughout Chinese history for its beautiful gardens and historical relics,” she further clarified.

Salli was referring to the scenic Sai Woo Park in the historic city of Hangzhou. Indeed, the restaurant’s surprisingly airy dining space in a city lacking room for expansion was already living up to the fabled charm of its namesake. Intricate ceramics and decorations were provided by Bamboo Village from across the street. A welcoming dragon on the sidewalk and painted murals by Milan Basic adorn the brick walls. One depicts the pioneering American actress Anna May Wong, chosen because her story resonated with the blatant discrimination occurring in Chinatown during the same era. And shrouded in shadows on the opposite wall is a portrait of a Chinese gentleman, who had been a local tailor and one of the founding members of the Chin Wing Chun Society, owners of 158 East Pender Street. This was the grandfather of Howard, her realtor from the nearby Main Realty, who had deftly managed the translations and agreements with the society members. Their council rooms and stained glass dome remained beautifully preserved on the top floor of the building, almost unchanged despite almost a century of history. And behind the dining tables the fusion dishes dreamt up by Chef Keev Mah were prepared, a testament to the nature of Vancouver as a meeting place for people from all over the world. And downstairs in the basement is a 75 seat lounge where the TEDx-inspired Woo Talks are held monthly. It was formerly a seafood restaurant whose owner died downstairs of a heart attack-it’s said that his spectral presence still amiably haunts the basement, sometimes breaking glasses and bottles. 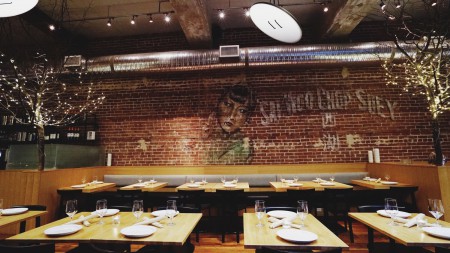 Several years ago, Salli, who was looking for the site of a potential new restaurant, initially turned down the offer to lease the space. It had always been a place where the locals went to for meals, having being home to the original Sai Woo Chop Suey in the 1920s before being taken over by New Town Bakery, which eventually moved out in 2010. The rent was cheap but the costs involved in upgrading it would be enormous. The space was too filthy, structurally unsound, and certainly not ‘ready to go’ despite the enthusiastic advertisements. Yet she found herself returning to the building, drawn to its past and its architecture. Eventually it was an old photograph which prompted her to make a decision. The photo, which now graces Sai Woo’s business cards, depicts a group of cooks and suited customers standing outside Sai Woo Chop Suey, casually watching the Lunar New Year parade down East Pender Street in 1936. It was that connection to the past in a city lacking one that finally persuaded her to take on the task of bringing Sai Woo back to life.

“As I walked through this space I could hear all of the footsteps and the clanging and banging of Chinatown’s past,” she recalled. And with that work on the restaurant began. Reworking the rotting space into a workable restaurant proved immensely difficult-the time spent stripping back layers of linoleum, plywood, drywall, plaster to reveal the original brick walls and wooden floors stretched for years. And of course there was the immense financial cost…

It was not just the interior that was changing. The surrounding neighbourhood itself was in the midst of transformation as the new Sai Woo gradually took shape over two long years of work. Bus routes were temporarily rerouted. Local businesses were affected by both the unwillingness of children to take over family businesses and the migration of the local crowd to Richmond and the suburbs. Drug use was steadily increasing and some homeless individuals had started to move to East Pender from neighbouring Hastings, especially after the closing down of the nearby bottle depot. It was practically just Sai Woo and the nearby Bestie which remained open after work hours, while the next-door Keefer Street boomed with apartments and its own Starbucks. It was not a promising situation for Sai Woo after two years of hard work. East Pender Street now occupied a diminished position in Chinatown.

But Salli is optimistic about her restaurant’s future, having overseen Section (3)-formerly De Niro’s Supper Club until the actor threatened to sue-before Yaletown was taken over by chain restaurants. Chinatown is quickly regaining some measure of life, evidenced from the gradual increase of tourists and pedestrians along the streets and the ‘For Lease’ signs gradually vanishing. Classic Chinatown staples like Foo’s Ho-Ho are making a comeback. The only problem at stake is over-gentrification, like the controversial development at 105 Keefer. It will become more important for local institutions to fight to retain the character of the neighbourhood.

Sai Woo is both a tribute and a second life. The original was there in the city’s early days, teeming with stories like the Hughes Gang drinking rum in the restaurant after the shooting of Yoshi Uno in 1942 and the secret passageways built into the brickwork when the police came knocking. Even the hardwood floors in the dining room are the exact same ones customers walked across almost a hundred years ago. And the new Sai Woo stands at the heart of the new changes rippling through Chinatown, ready to face a new century.

I thanked Salli for her time and walked back towards the west end, towards the slim width of the Sam Kee building, the Chinatown gate at the cross of Pender and Taylor, and the Sun Tower with its green dome gleaming in the distance, dwarfed by the skyscrapers rising behind it. 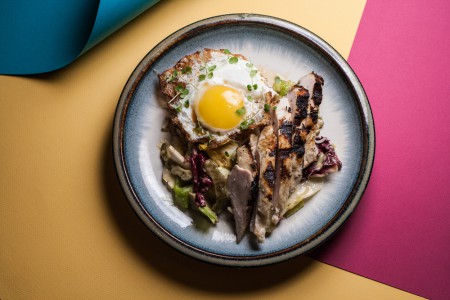 Sai Woo is open for business Tuesday to Sunday at 158 East Pender Street, Vancouver. Restaurant photographs courtesy of Sai Woo. The black and white photograph is from the City of Vancouver archives.

Read more from our Food & the City series here!