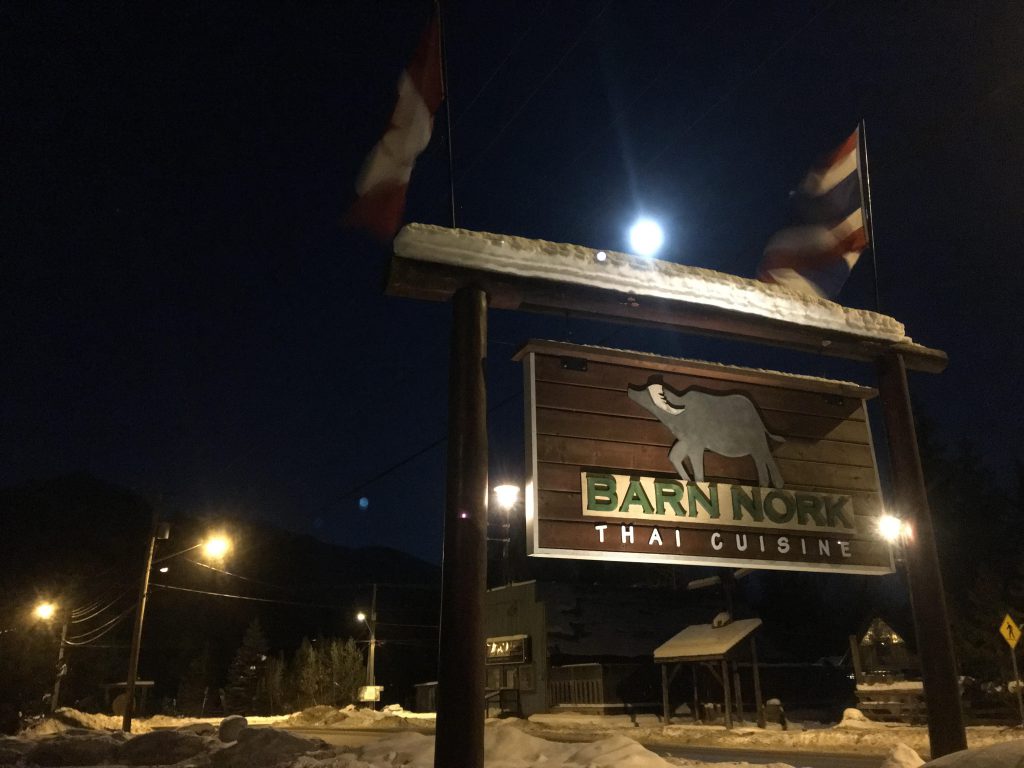 When we first saw Barn Nork, we were up on the Sea-to-Sky, the roadsides covered with fresh snow. The weather had been peculiar that winter and an unusual amount of snow had fallen in the Lower Mainland after two winters with only a sprinkling of slush. Out of the city, the air crisp and cold from the polar vortex, the highways were crowded as tourists commuted to and from the ski resorts. Past Whistler the crowds thinned out, and by the time we approached Pemberton the road was largely empty, cleared by an army of snowplows. Once far from the bars and expensive boutiques in the resorts, the mountains reverted to silence. In the summer the farms loomed, accessible only by a poorly-maintained road before the highway was finally extended all the way to Lillooet. And before that there was only the old Canadian Pacific Railway that connected the Lower Mainland to the Interior through the Coast Mountains, its steel tracks cutting through the small towns and villages along the way. Life there was quiet and full of hard work. At night the darkness was absolute, the rim of the galaxy clearly visible.

The village of Mount Currie arrived on the way to Joffre Lakes, sitting in the snowy shadow of its eponymous mountain. Named after a Scotsman who had settled there with his native wife, the area is part of the traditional territory of the Lil’wat First Nation. The trappings of the tourist industry and its million-dollar homes fall away here, giving way to large acres of farmland where horses in winter covers graze, and where road signs written in both English and the local language. This is an older British Columbia stripped of the trappings of its big cities. They are so far away here. Therefore it was unusual for us to find a Thai restaurant tucked away as we rounded a corner. One of us noticed the signboard with its water buffalo, while I recognized the familiar Thai word ‘Barn’ as it vanished from view. We had seen Thai restaurants in unexpected places before, like one in the Similkameen Valley, and had not been disappointed. So on our way back, in the dark of an early winter evening, we stopped by for dinner. 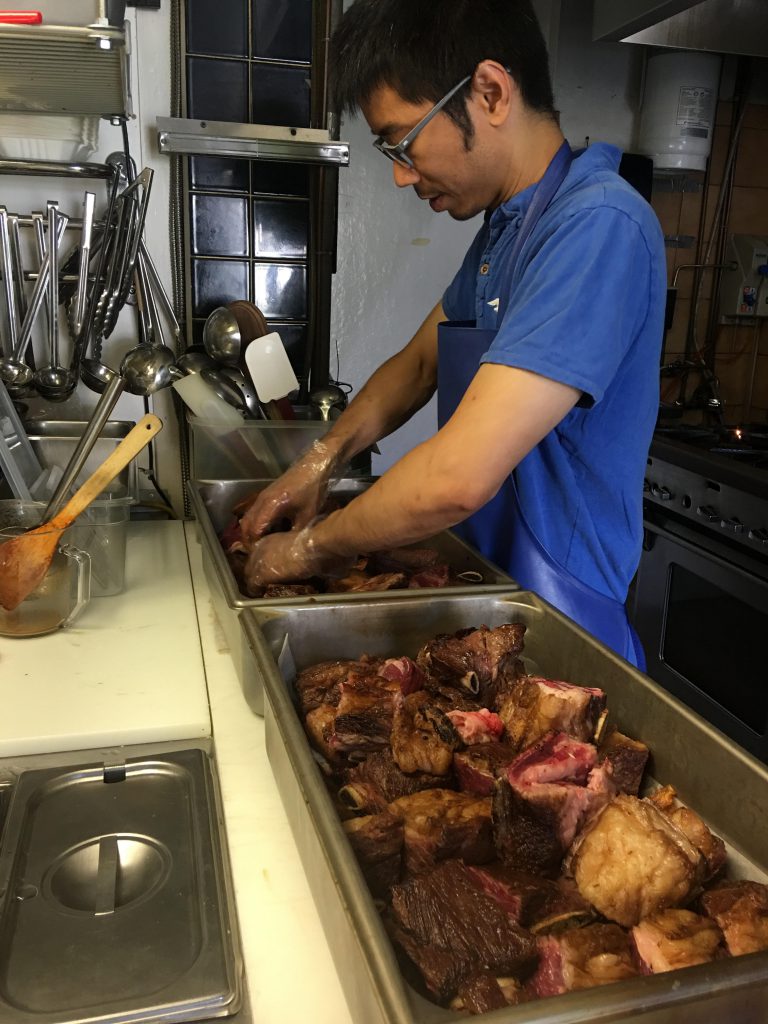 Barn Nork means ‘Village House’ in Thai. It is operated by Janice Sriwantan and Jay Nutamarn, who had graduated from culinary schools and had been working in the hospitality business for years. Their experiences led them to dream of setting up a Thai restaurant, but choosing a location was important. Vancouver would have been a natural option, with its endless crowds of hungry diners, but eventually their search took them all the way to Mount Currie. Many curious visitors asked the same question since they opened their doors the previous summer. Why Mount Currie, instead of somewhere more bustling, like Whistler? The reason was that they were interested in having a restaurant in close proximity to the outdoors, and hence the choice of name. The water buffalo on the sign recalled pastoral scenes of farmers hard at work in the fields of Thailand.

While running the business proved rather difficult at the beginning, especially since they were so far away from the regular crowds, it helped that both Mount Currie and the nearby Pemberton were relatively isolated and new restaurants were unusual. Therefore it was important to prepare Thai food of good quality, sourced from local ingredients, in order to keep the business sustainable and to win over the townspeople. Fortunately, locals from the village were friendly and this helped Barn Nork take off.

What Janice particularly liked about the area was the village. It was quiet, peaceful, and she appreciated the beautiful outdoors that lay all around. While starting the business was initially difficult, the combination and variety of outdoor activities was wonderful all year round. There was hiking in the summer, and winter sports began when the snow set in. But all of this was secondary to the most fundamental aspect of the business: the food. “Our favorite part is when we see the customers enjoy eating our food and loving it. It encourages us to continue developing our job by make more quality foods, with creativity, for the customers,” Janice said. 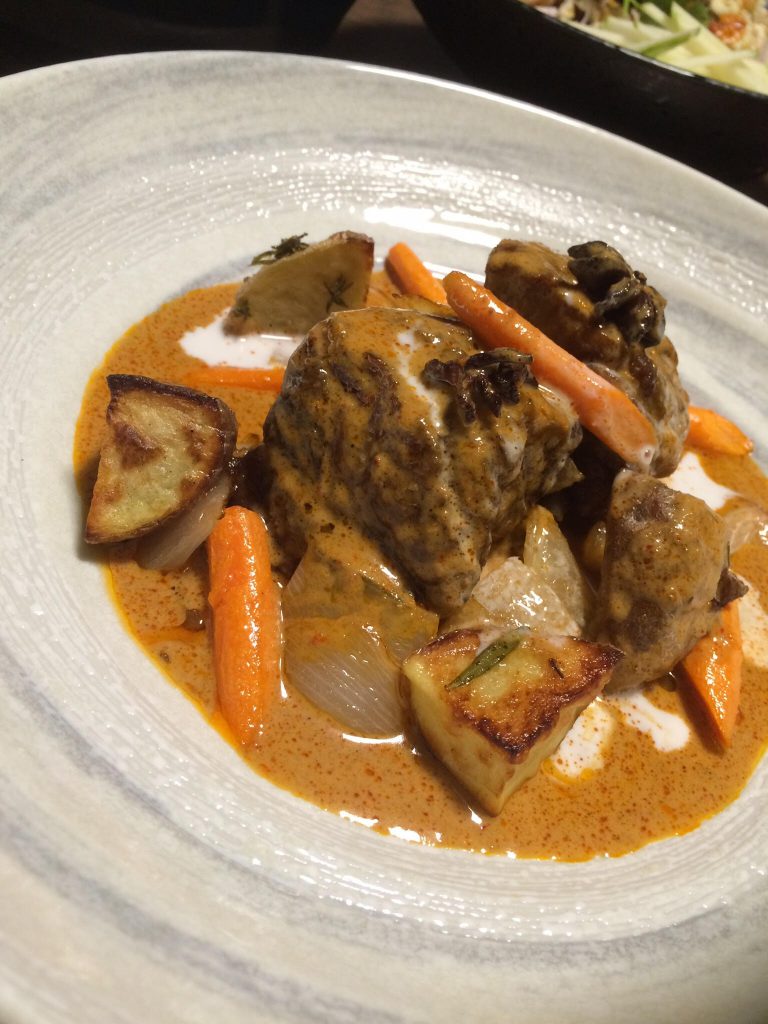 Massamam curry is on the menu

When it came to the dishes, Janice and Jay put in an effort to keep the food as authentic as possible, using ingredients that ordinary Thais would use. In addition there was a special dish on the menu: massamam curry. It was a mild curry that used short ribs cooked for six hours with onion, carrot, peanuts, and Pemberton Yukon gold potatoes. While we did not try it, we did have green and red curries, alongside a dish of eggplant. Despite the simplicity of the meal, everything tasted delicious, and the atmosphere was amplified by the frigid weather outside kept at bay by the warm and cozy interior. The walls bore its Thai decorations and for such a chilly night there was a large crowd in the house. I would later learn that their chefs were trained at the famous Mandarin Oriental Hotel in Bangkok, a city famous for its wide variety of delicious food.

And sometimes there were some small incidents that sparked things up. Two days after our visit there, the actress Kate Winslet and her family showed up. Sometimes the most surprising things happened in the least expected of places. 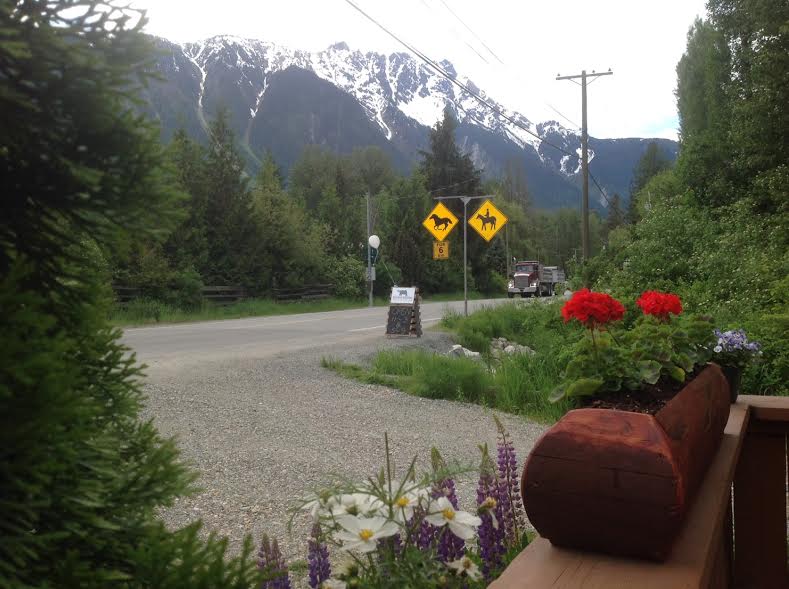 Barn Nork is open for dinner daily (except Wednesday) and is located at 2021 Portage Road in Mount Currie, just further up Highway 99 from the town of Pemberton. Photographs courtesy of Barn Nork. Special thanks to Janice for all her help. Read more from our Food & the City series here!