“For art comes to you proposing frankly to give nothing but the highest quality to your moments as they pass, and simply for those moments’ sake.”

Walking through the Juxtapoz x Superflat exhibition at the Vancouver Art Gallery was like walking through Lewis Carroll’s Wonderland. From the second I stepped off the escalator on the third floor, I was transported to a world of magical and monstrous art. They came out at me in voluminous waves of candor, colour, strangeness, and, most interestingly, quiet.

Curated by artist Takashi Murakami and Evan Pricco, the editor-in-chief of Juxtapoz Magazine, the exhibition gathered the work of 38 artists/collaborations from Japan, Korea, China, Canada, the United States and Europe.

Converging on a theory that blurs the line between high and low art, the co-curators took exciting contemporary visual art from various subcultures and placed them in a gallery setting. Spray paint trickled down a pristine white wall-spanning canvas, skateboards hung with their painted bellies out, and a blue neon-lit female figure lounged above our twisting heads. 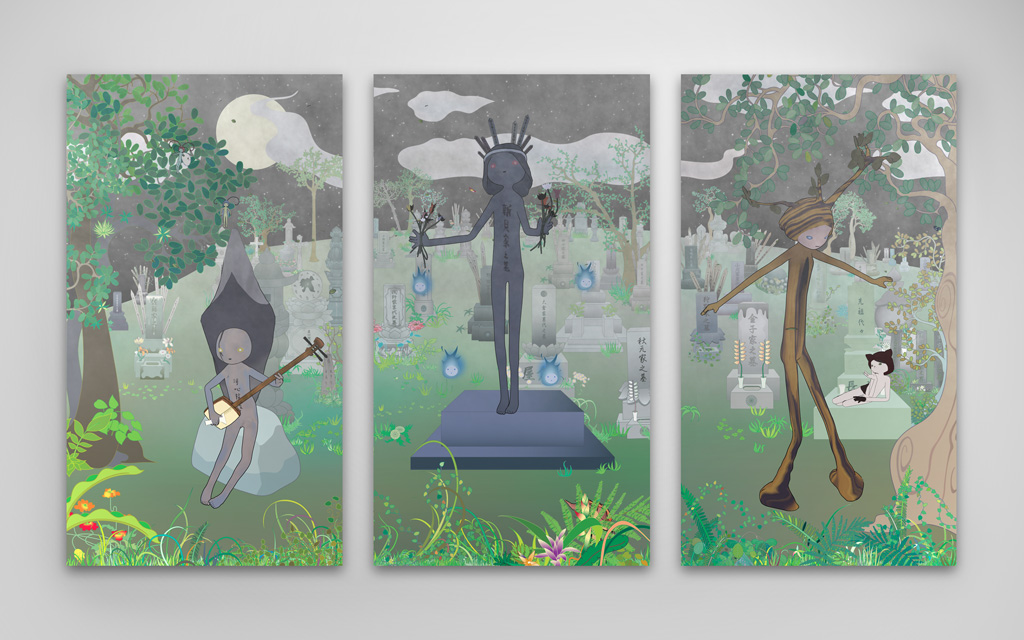 There was a lot that screamed for attention, but there was also artwork that demanded absolute silence. Chiho Aoshima’s interactive Little Miss Gravestone’s Absent Musing (shown above) entranced its onlookers through movement and song, with an animated gravestone singing of “her solitary life in the afterworld.” When the sensor was triggered, the performance began, with the gravestone accompanied by another graveyard dweller on (what appears to be) a shamisen, a Japanese three-stringed lute, and others that either danced within its monitor or moved across the three monitors. This dark, mystical, and kawaii animation brought peace to an overstimulated mind. Parra’s beaked rabbit-humanoid sculpture, Anxiety, balled up with hands clasped behind its neck, gleamed pretty in candy pink. But the closer I got to licking it, the more aware I grew of the deafening internal chaos that created such a hard shell.

Sketches by Kim Jung Gi and Katsuya Terada wrapped me in a cocoon. The details in their art had me standing and staring for too long, but I didn’t want to miss a damn thing. The amalgamation of science and fantasy in John Hathway’s anime-style panels sent me both flying and rocketing into an air of uncertainty. The prominent female characters in his works gazed out at me with the same curiosity I projected, but the hearts in their eyes seemed deceptive as they flowered out of irises that circled like radar scanners or target boards.

Paco Pomet stole my heart, above all (and that’s a very impressive, very diverse, all). He could very well have stolen the contents of my stomach too, for his painting, Social, was so beautifully grotesque. But it wasn’t a sickening feeling that grabbed my viscera, it was a jolting awe at the simplicity and refinement of the painting’s malformed aspects. The people in the foundational photograph that Pomet worked off discharged a swell of colour that gathered in a heap on the floor, and it was like they were oblivious to this exposed nastiness they didn’t know they created. Talk about an elephant in the room.

The Juxtapoz x Superflat exhibition ends on February 5th, which is just a few days away. I apologize for not writing about this sooner, but at the risk of fuelling a fear of missing out, I decided it’s better late than never. Now, off to the Vancouver Art Gallery with you! There’s so much more to see than what I’ve described. But just in case you don’t make it, here are the exhibit’s featured artists for you to check out in your own time: