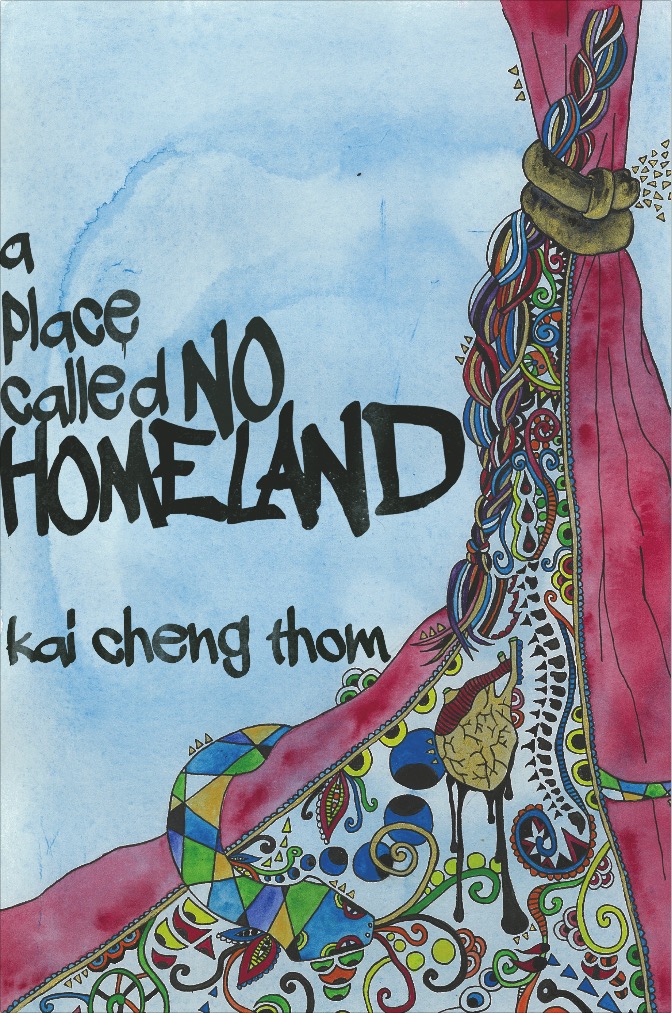 a place called No Homeland by Kai Cheng Thom

a place called No Homeland

Kai Cheng Thom’s a place called No Homeland is a tour-de-force debut poetry collection. The narrative poems of No Homeland are laced with fierceness echoing Thom’s background in spoken word performances, yet are written with tenderness as they tell stories of the marginalized, children of the diaspora, queer and transgender communities, and survivors of abuse. Through Thom’s concise wording in well-paced poems, she will make you feel the heartache of narrators that realize the erasure of their identity, but she will also instil hope and happiness as others triumph over their heartache and the wrongs they are victims of.

No Homeland gives a glimpse into what is like being Asian in queer and trans communities. One of the most striking representations of this is in the poem “between friends” where the narrator struggles to understand how their friend is able to attract men as they think:

Poems like “between friends” speaks to how the feeling of being “less” is still very much present in queer and trans communities when one is a person of colour; it begs us to rethink how inclusiveness is defined. Identity and self-worth are also explored further in poems like “when is a woman?” where the speaker works through an inner conflict of transitioning from male to female, but begs their mother to help define when someone becomes a woman:

mama,
can you tell me, when am i
a woman? love,
your son

Familial relations are an enormous theme that flows through No Homeland. Near the beginning of the collection a piece called “what the moon saw” acknowledges pain endured early on in life, and finding that there is love to be found in it, despite the anger and violence:

a force of gravity, a storyline binding us all together:
my father, his fist, my mother, the scar. me and moon and you, my love:

This method of tapping into memory allows for some of the most poignant poems. Pieces such as “its name was the Boy Without A Penis,” “the river,” and “growing pangs” are meditations on the origins of an identity, where an individual realizes they are something else society sees them as, but still respecting their ancestral background. Perhaps the greatest triumph of Thom’s debut poetry book is when the words are simply written unapologetically, loud, and with burning intent. In “dear white gay men” she begins with:

sit down, shut up, and listen.
dear white gay men:
you are neither the face
of my oppression
nor the hands
of my salvation.

This same loudness that invokes cheering can be found in pieces like “your white cisgender boyfriend can’t save you from the end of the world” (a title that definitely captures the personality of the poem, as you can imagine). Rightfully so, Kai Cheng Thom is simply fierce. a place called No Homeland is abundant in poetry that serves as a call-to-arms to stand up to oppression, and take time to slow down and love oneself. Emotionally stirring, every poem from Thom stands so strongly on its own, but read together, they create an ethos so impacting that you can’t help but to feel like you are witnessing Thom perform them before you.