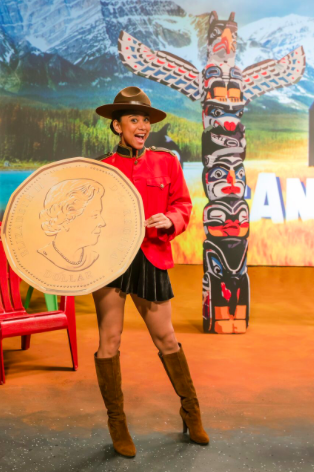 Isabel Kanaan acting in one of the shows. Photo credit Rodney Daw.

Born and raised in Manila, Philippines, Isabel Kanaan now makes her home in Toronto, Canada. She is an alumna of Seneca College’s Acting for Camera and Voice and Second City’s Conservatory program, and a recipient of the NBC Universal Bob Curry Fellowship. Isabel has played prominent roles in numerous productions, such as Ponytail, Women, Haunted or Hoax, and Hey ‘90s Kids, You’re Old, which have all garnered many awards and accolades. Ricepaper was able to talk to Isabel about her most recent success: becoming a cast member of the Canadian comedy troupe AIR FARCE! AIR FARCE will be premiering its special, AIR FARCE CANADA 150, on CBC at 5 pm PST and 8 pm EST this Canada Day. Watch one of their sketches, “Canada: The Musical”, featuring Jessica Holmes and Chris Wilson here.

Describe what AIR FARCE means to you in exactly five words.

How did you become involved with AIR FARCE, and how did you react when you found out that you would be the newest addition to the troupe along with Chris Wilson?

I’ve been pursuing comedy for roughly two years now. I’ve been doing my reps in improv sketch and sometimes stand-up rooms all over town. Doing the grind, people got to know who I am. One of the writers actually told me, “Oh, I saw your show the other week!” and I thought, “Oh, cool!” So he contacted my agent, and I auditioned, made them laugh. Made them laugh even more, because one of the producers came to my show after the audition, so he recognized me, and that was great. That was the process of how I got into it. When I learned that I got in, I was walking outside on this busy street, doing my errands…and then my agent called, and he gave me the news, and I was like, “What!” …Then I called my mom, which is funny because my mom was like, “What? What’s AIR FARCE?” I was like, “Mom, it’s okay. Never mind.” 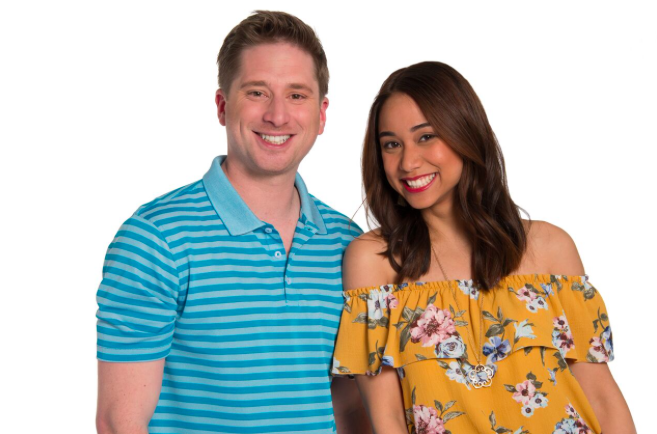 “When I found out that Chris was involved,” Isabel says, “I thought that was really cool. I thought, ‘Phew! Okay, I won’t be the only new kid.’ It was great, too, because I met Chris once before when him and I were doing our shows at the Winnipeg Fringe Festival.” Photo credit Rodney Daw.

What are some challenges and accomplishments that have come out of being a part of AIR FARCE?

My main challenge was shaking off imposter syndrome, because these people are so seasoned. There are people in the community who have been pursuing comedy for years, and I’ve just been doing it for two years, which is a relatively short time. I felt like a baby when I joined. I kept thinking, “Oh no—they’re going to fire me!” every step of the way. But also, I moved to Canada nine years ago, and I was worried since AIR FARCE was such a Canadian show that I would miss a lot of Canadian references. And it did happen. There were times in the script when I thought, “What’s this?” but the team was so supportive and fun that, even after my first day with them, I felt right at home. The cast, even though they’re so accomplished, treated me as one of their peers, as opposed to hazing the new kid. (Although they did haze Chris, but that’s another story.)

AIR FARCE often blends commentary on Canadian politics, current events, and popular culture with humour. Why do you gravitate towards comedic roles, and how do you think it connects to viewers / tackles important discussion points in ways that other genres cannot? 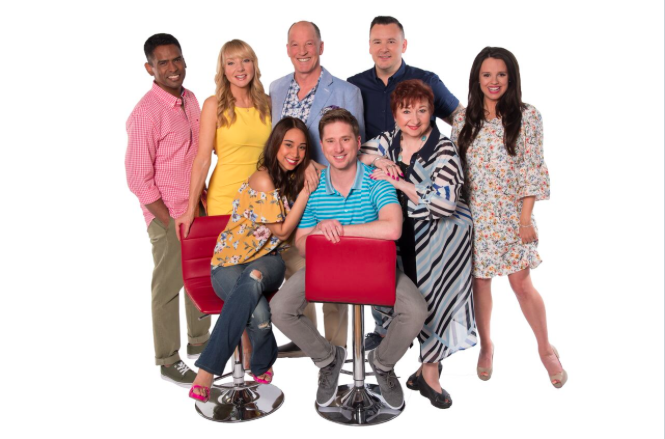 When I was in acting school, I remember my teachers would always say, “You always find the comedy in everything.” And it’s true, I do. There’s always comedy in everything. I do this because we live in a world where we are constantly bombarded with bad news, and it gets overwhelming. Especially as an actor, you have to be open, you have to be empathetic towards these things. There is just a lot of emotions, and it can be very overwhelming. I don’t like hearing all the bad news that’s going on, but we still have to be aware of it. That way we can keep in mind what we actually have to do to change the world into something better. And so how do you be aware and at the same time not be overwhelmed with that news? Comedy! It makes us aware of things, but at the same time, it lightens the mood, and I think everyone needs that once in a while.

How important is it to you being a Filipino-Canadian actor? How has it affected the direction of your career, if at all?

I was already thinking of going into a major in acting [in the Philippines], but when I moved here, I thought, “I can’t do that now.” When I moved here, I remember I talked so slowly. I could speak English, but there was an accent, and I would speak slowly because I would mimic what people would give me and I would just push it back. It took a while for me to get comfortable with just speaking in general. It took me a while to find acting again in Canada. When I went to university, I did math at first, but I kept switching [majors]… I finally switched to acting because I met people from the program, and I’d say, “Oh, you know what, I used to act a lot.” And by that time, I had been in Canada by a pretty comfortable amount of time, and I thought, “Let me give this a shot.” And it was great. Best decision of my life. It’s hard to say if being a Filipino-Canadian has affected my career because it’s not like it happened all of a sudden. I was always a Filipino-Canadian actor, and everything I’ve done and will do will be affected by it.

You have quite the extensive resume, having participated in roles concerning film/TV, theatre, musical theatre, commercials, voice overs, and (of course) sketch comedy. You even write for some of these productions. Why get involved in so many different forms?

I remember one of our teachers at Seneca would always say, “You’re not a working actor if you’re not working.” And I really took that to heart, because it’s true. I think a lot of actors struggle with “When do you actually start labelling yourself as an actor?” because for the first parts of this industry, you’ll be doing these things for free or for little money, so it’s that whole thing of “When do you become professional?” I do all these things because contracts are short. Even a big contract has an expiry date, and I don’t want to just wait around for the next one to arrive. If it happens, it happens, and that’s great, but if it doesn’t, I make it happen. I don’t like not doing anything. I believe that actors are like athletes. We have to practice and keep rehearsing, keep our chops up there, because when the opportunity does arrive, you have to be ready. A lot of people think you get a lucky break, but that’s not it. I just saw this [Prince] quote. It’s amazing—it said, “Sometimes it takes years for a person to become an overnight success”—because it’s so true!

What advice do you have for people who aspire to be as immersed in the acting business as you are now? 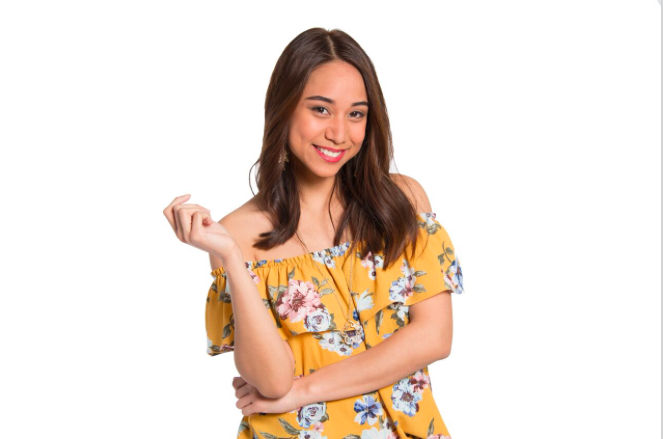 “You have to be really strong,” Isabel says of acting. “Just keep that mantra of ‘Why do you want to do this?’ You have to keep it in the back of your head and never let it go, and just keep on doing it, no matter what happens, no matter what people say, no matter how many no’s you get, because there will always be a yes.” Photo credit Rodney Daw.

One piece of advice that I give people is to keep working hard. People often think acting is all fun and glamour, but it’s a lot of work. I would also tell them to be aware of what skills they have and use them to further their career. I think that’s why I do a lot of things, because I am interested in all these different things. I like to write, I like to do improv, I like to play musical instruments, and so I incorporate all of that. It’s interesting because all of that is what makes me me, that’s my brand, and that’s what I eventually give to the world in my career.

What will AIR FARCE CANADA 150 bring that viewers haven’t yet seen before from AIR FARCE, and what are you hoping they will take out of it?

In this special, we tackle and call out some issues the country has been dealing with for a long time. We all know how much AIR FARCE loves Canada and how our viewers love Canada and how Canada is amazing in general, but just like every other country, it has its problems. So it’s good to see the show addressing the problems some Canadians face. I think a lot of people would not only be laughing at the special but come out as a proud Canadian, also asking themselves, “What can I do to help?”