Summer drapes itself across clear blue skies and warm, lazy weekends. Even on the occasional rainy day, it sings behind the cloud cover.

You hold on to a fading dream about cats, about an adorable black or white kitten, before sighing into the blankets. Cue several tired blinks, as you think just maybe you’ll fall back asleep. The shadow of an unknown weather forecast continues to drift away outside.

At some point though, you fumble out of bed and take small steps to the kitchen. The rest of your sleepiness disappears when you try to grab the cereal on the highest shelf. You toss away an empty box, pouring enough milk to make a soggy cereal, which you delightfully worsen by warming it up in the microwave. 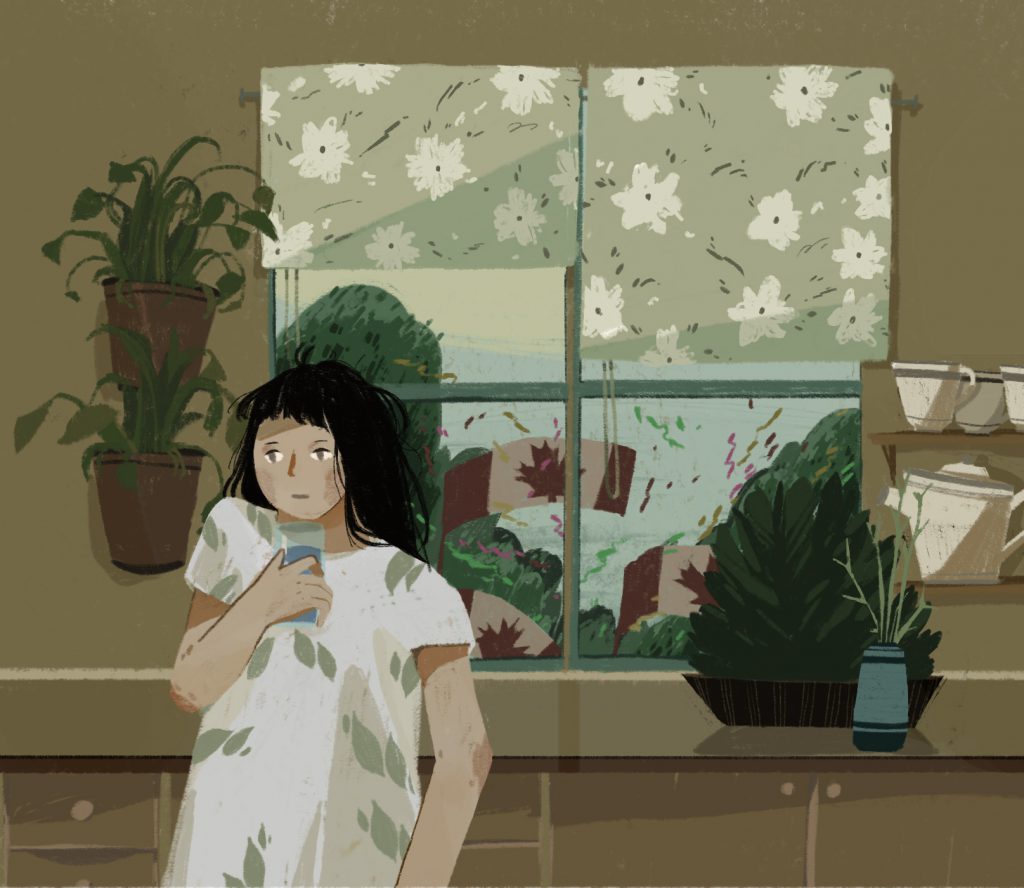 As if the ghosts of the house don’t appreciate your terrible taste, you hear noises coming from upstairs. You’ve never met whoever lives up there, so you can’t tell whether they’re bickering or just having a particularly loud conversation. Muffled but coherent snippets of the conversation float into your ears and you vaguely construct the details: a picnic, a park, and something about enjoying today, when your eyes fall on the nearby calendar. A large maple leaf marks the first of the month.

Right. Today is one of those universally patriotic days. You pull at the bridge of your nose and breathe, listening to the microwave’s cheerful beeps. You wonder how eventful or uneventful today might be – a country’s celebrated date is always something magical to see and participate in. You celebrated such days quite dutifully yourself. But did you do it with faithful, patriotic fervour? That’s an entirely different story.

A sense of homesickness suddenly grabs you. Almost, just almost, you miss the desert home you came from. Sure, you never belonged there. The title of expatriate clings to you over there as it does here. But you grew up there, so it’s home as much as someone who isn’t a citizen can call it.

Which, if you were to voice your opinion, isn’t much.

It’s not because your heartstrings are tied loosely to it. No, you cherish your home city so much, to the point that you will easily look the other way to maintain a perfect memory of skyscrapers and tourist grandeur. The problem comes from defining what ‘home’ even is.

You wonder how eventful or uneventful today might be – a country’s celebrated date is always something magical to see and participate in.

By technicalities, home ought to be a subcontinent of spice and gold. By ancestry, home ought to be the current greatest power of the fancied East. But you’ve barely visited the former and never even flown across the latter. And now you’re here in Canada for future prospects — can home be one of them?

A thoughtless smile spreads across your face as you attend to your cereal for a moment, taking the lukewarm bowl to a table and grabbing a spoon from the dish-drying rack on the way. Should there be a certain day where you’ve become seemingly settled, perhaps here in Canada as one of its own, you might gain something more than a changed citizenship and solid roots to a landmass. Maybe you’ll feel less fluid and transient. Perhaps you will stop being a cultural mix of this and that, but nothing that really seems to belong to the place that you’re living in.

You really could gain those things in the future, maybe. But of course it won’t change what you were before any of it. In these introspections, where ultimately you’re being overly dramatic with yourself, there is a slight satisfaction in embracing your status as part of the diaspora. After all, it’s the only absolute thing about you: a constant fact that won’t change even if you become unrecognizable to yourself.

—And that’s enough thinking before breakfast, you conclude, before slurping cereal and moving on to thinking about how cute cats are.

Yuan Meilin is pursuing a BA in Pacific and Asian Studies at UVic. She lived in the UAE before moving to Canada for university studies, with the experience being seen as an odd thing to add to her personal puzzlement over transnational concepts. She also enjoys writing prose and reading about flowers.