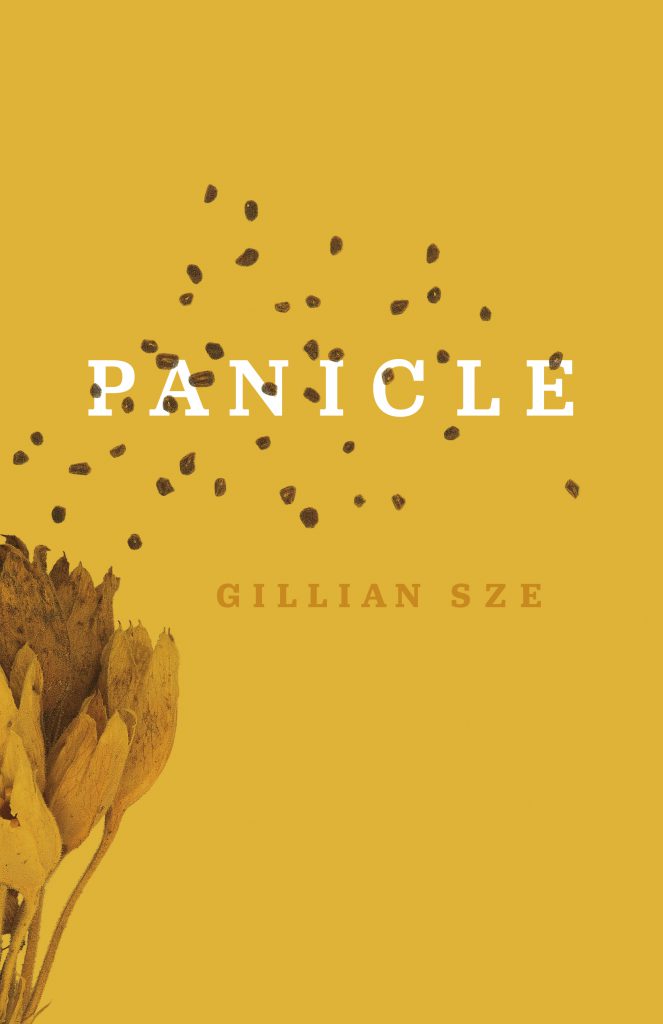 A panicle is a loose cluster of flowers, often used in reference to oats. While florae such as lupines and asphodels feature occasionally in Gillian Sze’s fifth poetry collection, Panicle takes most after its namesake in its semblance to a conversation with someone beloved: What begins as a seemingly offhand remark—the admiration for another’s legs in “Phantom Limbs,” for example—ultimately and intricately branches out into deeper, more personal territory—touching upon themes of affection, need, and loneliness as the narrator adds, like an afterthought:

And oh, the sound of your voice—even now—how it coats the word honey, heroically and golden, over the phone, in the lonely dead hours of the night.

With a keen eye, Sze utilizes simple and oft-missed details of everyday life to engage in conversations with constructions both psychic (art) and physical (nature), exploring how we are affected and inspired by them, and how they become reflections of our resilience, struggles, wants, regrets, and absolute wonder of the relationships we form and can’t always seem to control. “Calligraphy (心)”, the heartfelt opening poem of Panicle, takes advice from Johan Björkstén’s Learn to Write Chinese Characters and a line from Du Mu’s “Apricot Flower Village” to inspire the reader to pay closer attention to the care we put into—and even the hesitations we might experience—transcribing our thoughts:

To write heart in our language takes only four strokes, but so much
depends upon the first mark. The long hook tugs at the word’s centre,
holds everything together. The final three strokes resist and search
for blanker spaces.

These astute observations eventually comment on our attempts to express ourselves, the deep-set fear that we might never be able to but our determination to try anyways, in the many different avenues available to us.

Indeed, Sze’s heavy engagement with art, its movements, and artists throughout the four divisions of Panicle make it distinct as a poetry collection. All of the “Sound” poems characterizing the first part quote prominent film directors and filmmakers. The third part, its own poem entitled “Guillemets,” is a response to Roland Giguère’s chapbook Pouvoir du noir and is an extraordinary collaboration with the sketches of Jessica Hiemstra, who skilfully invokes dynamism within the limitations of the printed page.

Sze’s willingness to experiment with different forms of poetry also makes Panicle so intriguing. From prose poems to sonnets, Sze showcases her immense talent as she writes both longer, languid poems and poems with the economical, clipped style reminiscent of William Carlos Williams, to which some pieces even pay homage. Neither style sacrifices what lies at the core of Sze’s success as a poet, however: her ability to convey the most pressing and complex emotions that make us who we are. “Proof,” one of the terser poems in the collection, is a perfect example of this. It loses none of the heart captured in her lengthier works but instead capitalizes on its frank diction and abrupt ending to translate the urgency and raw intensity of desire:

Take a look: I want you to go blind. I want something in me to do something irreparable, irreversible in you.

Sze has published yet another outstanding collection, offering us several budding points of conversation, and we have no choice but to follow the natural bifurcations of them, as we are led, dazzlingly, to their many blossoming conclusions.