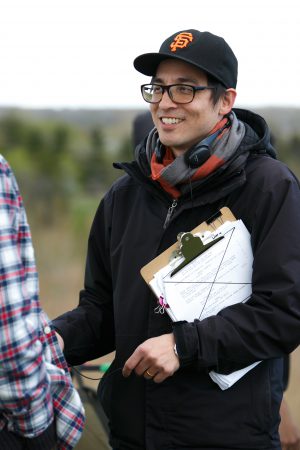 Aram Siu Wai Collier is a filmmaker, educator and former film festival programmer. He has experience with a variety of projects, including documentary films, dramatic films, experimental films and live music. He was on the award winning documentary team for Refugee and the director for Who I Became, both which were broadcasted nationally on PBS in the United States. Based in Toronto, Aram is a San Francisco native of a mixed-race Asian Canadian/American (Chinese and English/Dutch/German) who has a BFA (University of California at Santa Cruz) and MFA in Film Production (York University).

His film, Stand Up Man will be the closing film for the Toronto Reel Asian International Film Festival in 2017. A film about a Korean Canadian comedian who puts his dreams on hold, the movie will resonate with many who are caught in the similar situations due to family obligations. Ricepaper’s review of the film can be found at this link.

Although Aram is a super busy man, we had a chance to catch up with him and ask him a few questions about the inspiration behind Stand Up Man, Asian culture, advice for filmmakers and his next big thing.

JF Garrard: What motivated you to tell this story?

Aram Collier: My motivation in my work has always been to tell stories of Asian North Americans. This story in particular got its inspiration from a summer when my wife and I took care of a relative from Korea. It wasn’t all that dramatic, wacky, or super difficult, and in fact, I look back on that time fondly. But it’s a common experience that a lot of people can relate to and sometimes it is a lot more dramatic. So I jotted notes down over the years into a google document and would periodically add things to it that I remembered, heard, observed and so on. When we got the idea to apply for funding for this, I realized I had a lot of notes about some kind of story where a Canadian born Korean would have to host their Korean cousin in Canada. So we took that leap and put this idea out there.

JFG: How has the subject of Asian filiality from the film resonated with the audience in North America versus Asia?

AC: We haven’t had the opportunity to show the film in Asia yet, though it’s something we’re working on. But I think the subject/idea of filiality and the reaction to it will vary even amongst North American audiences between different communities and generations.

JFG:  Of all the occupations possible, why did you choose being a stand-up comedian to be the dream of the main character?

AC:  Stand-up comedy seems like one of those things that people think is really easy, but is actually really, really difficult. So for Moses to kind of underestimate how hard stand up is, was important. Plus our dreams are usually a little naive, unreasonable, and cooler in our minds than what they really are. One thing I really like about stand-up comedy is the confessional nature that some comics perform. I liked the idea that somebody like Moses who is feeling at the end of their rope could turn to this type of performance and maybe get something out of it to get themselves centered again.

JFG: What do you think is a good way to resolve conflicts between immigrant parents versus their North American born children, given the clash of cultures?

AC: I’m certainly don’t feel in any position to give advice about how to resolve intergenerational conflicts. I think people just have to figure it out. But I would say that while, yes, it feels like a common occurrence we also should recognize that there are a lot of super supportive Asian parents too. I mean one way to address these cultural conflicts and to pay some dues to these parents who are more supportive and give a little more rope, maybe it’d allow other parents to see another way of reacting to their kids’ desires.

JFG: How long did this take from script to finished film?

AC: We got funding in summer of 2015 from Telefilm’s Microbudget Feature program which is a program that is meant for first time feature directors and producers like me and the film’s producer Tony Lau. It’s such a great program that gives great opportunities to a lot of Canadian filmmakers. We shot the film in May 2016 and finished everything by the end of April 2017, so it all took about two years. But it’s also now on the road at film festivals which will likely take another year or more. It’s a long haul.

JFG: Any difficulties in production along the way?

AC: Probably the biggest challenge was the casting. This is a unique film in that it’s a story about a Korean Canadian family with a lot of details and insight reflecting Korean Canadians, so I really wanted to make sure that we casted from that community. However, the pool is just not as big if you’re limiting it to that community. It’s not to say there aren’t good actors out there, but you come across challenges in what those actors can do and what you need to do for the film. For instance, we needed Joon’s character to be played by a Canadian actor but who could speak good Korean. Luckily, I had seen both Daniel Daegun Lee (Joon) and Rosalina Lee (Yoojin) in previous films and they were available to do the film and they were great. Moses’ character was much harder but we really lucked out when Daniel Jun showed up and was immediately the one to go with. He really rewarded us in his performance and dedication to the film.

JFG: What advice do you have for aspiring film makers?

AC: See above – you need some luck! But I would say – make sure you have the best team possible. We were so fortunate to have such a great team to make this film. From the producers, Tony and Betty Xie, executive producer Borga Dorter, our cinematographer Kevin CW Wong, my co-writer Nathalie Younglai, and right down the line; everybody had this great sense of pulling together and making this film happen. While you need some luck to get the right people, it’s also about choosing the right people to work with. You want to find people who have the spirit, values, and work ethic that align with your own. Assembling the ‘best’ team doesn’t mean you have to get the Michael Jordan of every single department. In some cases we took chances on certain people who maybe weren’t the all-star candidate but ended up being fantastic, so finding that in the people you choose to work with is a skill.

JFG: What’s your next project?

AC: One of the small details in Stand Up Man is the references to food, so we’re working to develop a project about the kitchen staff of a Cantonese restaurant. I’m just writing, brainstorming, always keeping options open because opportunities arise and you have to be prepared to take them on just like we did with this film.