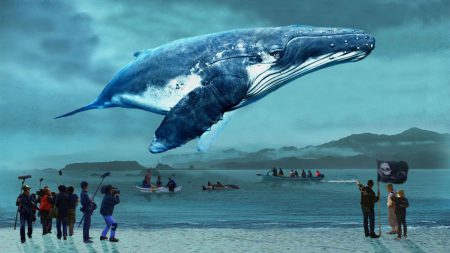 Megumi Sasaki’s A Whale Of A Tale documentary was created as a response to the Academy Award winning The Cove (2009). The Cove vilified the residents in Taiji, Wakayama, Japan by secretly filming their 400 year old practice of herding dolphins into a cove for hunting. While The Cove mainly tells the story of animal activists, A Whale Of A Tale shows the stories of both sides, namely the animal activists and the Taiji residents. Filmed between 2010 to 2016, Sasaki’s documentary consists of interviews, footage of hunting and illustrates the history of why Japanese people hunt dolphins (in Japan dolphins are considered whales). The town residents were horrified after the success of The Cove, as their town began to be filled with animal activists interrupting their whale hunts on a daily basis.

Taiji is located in the southern part of Japan and is a small town with about 3,500 residents. When it was formed, there was little transportation to the city, water was scarce and the land was not fertile enough for farming. The only advantage the town had was that it sat on a passageway for whales and dolphins. As a result, the town became a whaling town, with generations of people becoming whale/dolphin hunters. In the Industrial age, Americans and Norwegian began to hunt whales with ships and harpoons, taking only blubber for oil lamps and leaving the rest of the carcass in the ocean. This is a very different practice from the Japanese whom used all parts of the whale and hunted without any mechanical equipment. After the devastation of Japan in World War II, the American occupation authorities endorsed whale meet in school lunches since Japan had few resources. However over time, similar to the rest of the world, the Japanese ate less and less whale or dolphin meat, as they started to consume chicken, beef and pork. 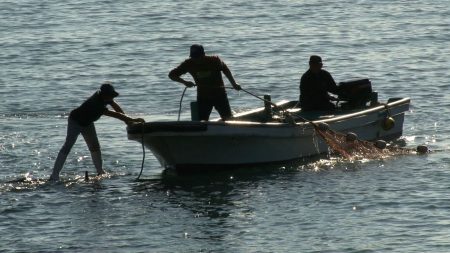 The animal activists are represented in the documentary by Scott of the Sea Shephard Group and Ric O’Barry, the famous trainer who captured and trained the five dolphins used in the TV series Flipper. Both are Caucasian, American males who monitor the coasts of Taiji periodically by filming and attempting to stop the Taiji fishermen from capturing dolphins. At one point, Scott offers to buy dolphins from a whale hunter. It did not appear that the answer was translated completely other than “no”, as the whale hunter talked at length about how he did not feel any pride taking donations from strangers for not hunting or working. Hunting was part of their culture and money earned was used to feed the next generation. Simply selling one day’s worth of work was not the solution. Admittedly, while watching groups of animal activists invade a quiet town was unsettling and while they want all the dolphin killings to stop, they did not seem to offer any solution for the livelihood of the residents. The whole affair appeared quite paternalistic.

Whalers interviewed by Sasaki were wondering how they would survive in the future with quota limits, falling prices and less consumption. Twenty years ago, an animal would fetch $35 per kilo, now the prices are $6-9 per kilo. On contrary, capture of live dolphins could net $1,500-11,000 per animal versus $40-110 per animal sold for consumption.

The most insightful comments came from a Caucasian American journalist, Jay Alabaster, who lived in Japan for 18 years and speaks fluent Japanese. His mission was to live in Taiji and to write a book one day to explain all sides of the story. In his interview with a local dolphin activists (whom had been advocating for Japan to stop dolphin hunting long before the West), two points shed light on why this debate has been going on for so long. First, the Japanese view dolphins and whales as food versus cute animals. This is equivalent to telling Americans to stop eating steak. Second, if the pressure from outsiders would stop, most likely Japanese people would stop eating whale and dolphins since they are not popular dishes. However, with outsiders interfering, Japanese people feel the need to fight for the right to eat whatever they want.

While it is understood that animal rights activists want to do good in this world, Jay hits another interesting point when he states that they are using a lot of energy to protest about species that are not endangered. Out of 88 species of whales and dolphins, only 7 are hunted in Taiji and the hunters do not go after other types of creatures. In fact, to be a fisherman, it takes 5-10 years before one can distinguish between all the species. In a debate between the town councilman and activists, a council member spoke about outsider interference and if the people truly cared about the town and dolphins, they should move to Taiji as a resident to help resolve the issue. Meanwhile the animal activists stated that the town cannot lean on tradition as the excuse to keep hunting, as slavery used to be a tradition too. The sides did not reach an agreement unfortunately and have not had another meeting since.

The documentary does present a glimmer of hope as the former Taiji mayor Goro Shoji, had understood in the 1960s that days of whale hunting may end one day. He visited museums in the United States in pursuit in order to create the world’s best whale museum in his home town. His predecessor, Mayor Kazutaka Sangen carries on this vision by inviting people to conduct whale research in Taiji.

A Whale of a Tale is a fascinating documentary presenting a clash of East versus West ideals and the difficulties of carrying on a tradition versus global society norms. There is no doubt that whaling will probably be stopped by future generations in Taiji, however, it is their up to them to consider what they want for their future.