The Toronto Reel Asian International Film Festival opened with Yukiko Mishima’s moving family drama Dear Etranger 幼な子われらに生まれ which is based on Kiyoshi Shigematsu’s 1996 novel of the same Japanese title. The film is a quiet family drama which focuses on Makoto Tanaka (Tadanobu Asano) and his role as a father/stepfather in a two family setting. The story starts off with Makoto and Saori (Raiju Kamata), his daughter from his first marriage at an amusement park. There is notable distance between them which is explained in the revelation that his ex-wife has full custody. Makoto is also a stepfather to his second wife’s two daughters, Kaoru (Sara Minami), an angry 16-year-old teenager and kawaii little Eriko (Miu Arai). When Kaoru learns that her mother is pregnant, she threatens to tear the family apart as she acts out by pushing her pregnant mother around and demanding to see her “real” biological father. She also cruelly reveals to her younger sister Eriko that Makoto is not her real father, causing more friction. Makoto meanwhile wonders if bringing a fourth child into the world is a good thing when his company is downsizing and he has to support so many children. The title refers to the fact that he doesn’t want to be a stranger to his children, but this ideal is difficult to realize when difficult events (fatal diseases, salary cuts) enters his family’s world.

The story is a fascinating commentary on the role of fatherhood and motherhood. Makato believes that he is trying to be a good father by spending time with his children instead of drinking with co-workers after work or taking on weekend shifts. However, due to these actions, his workplace does not believe him to be loyal to the company. His second wife’s ex-husband,  Sawada (Kankuro Kudo) has not seen his daughters in years and would rather gamble or drink than spend time with family. Meanwhile, Makato’s  first wife  Yuka (Shinobu Terajima), an ambitious professor, is quite the contrast to his second, younger housewife Nanae (Rena Tanaka). While Nanae appears weak due to her daughter Kaoru bullying her, she is actually quite strong as she advocates to keep her unborn child. In contrast, Yuka never wanted children for fear it would ruin her career, however, she did have Saori (an accident) and tries to be a good mother anyways. Both women work hard at keeping their family afloat and want the best for their children. 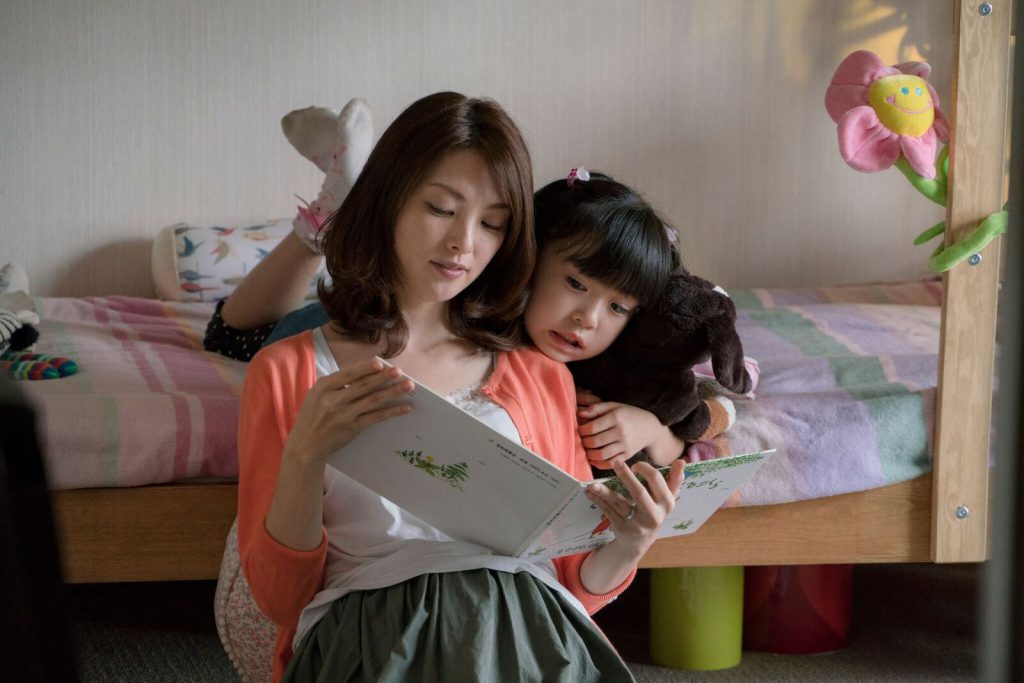 Director Yukiko Mishima does not provide any judgement over which character is better at being a father or mother, the situations are presented to the audience to make their own judgments. The cinematographer captures the pain of each character well, by cleverly illustrating domestic abuse with shadows to stir up emotion versus showing these difficult scenes directly on camera. Tadanobu Asano plays Makoto naturally without any brash overacting as the drama unfolds.  Shinobu Terajima as his ex-wife was well cast to portray a character under immense pain during both past and present marriages. Her dialogue was piercing when she challenged how children ruin women’s lives. Rena Tanaka was great as the second wife who was vulnerable and immature, without control over the teenage Kaoru. The children were all excellent actresses and did not shy away from acting out difficult scenes.

The film tackles challenging subjects in conversations between the characters with regards to death, divorce, parenthood, domestic abuse and abortion. The adults try to shield the children from their struggles but obviously it is not possible and the interactions are touching even though the situations are extremely depressing. While the film is not the most uplifting selection available at Reel Asian, it is one of the more quiet ones which forces the audience to examine their own ideals of family and question what is a good life. As divorce rates become a norm compared to previous generations, no doubt family units will become more complicated as multiple parties are involved. Dear Etranger is a film which will resonate in the minds of the audience after they leave the theater.