‘The Pain We Cannot Swallow’ by Jane Shi10 min read

Note: December 13th, 2017 marks eighty years since the Nanjing Massacre. “The Pain We Cannot Swallow” is a Chinese Canadian reflection on the play Japanese Problem. It discusses various traumas related to WWII, including Japanese incarceration, the comfort women system, and the Nanjing Massacre.

Take the sharpness of an early autumn Vancouver chill and clench the entire body with it like an unwanted, surgical hug. It’s the kind of pain that turns you from an average East Van audience member into a wet shadow shuffling away from a site where performance, history, and trauma greet each other and shake hands. Your hands are held taut against your chest with an invisible clamp. This shadow was me on September 27th, 2017, when I went to see the play Japanese Problem by myself at the PNE grounds at Hastings Park. I walked away filled with this pain, from the site where eight thousand Japanese Canadian women and children were detained during World War II.

Bearing witness to historical trauma across communities is not easy. I have tended to avoid reading too closely into the history of Japanese Canadian incarceration, even though the barring of Japanese Canadian students from attending UBC was a major reason why my minor, Asian Canadian and Asian Migration, was initially established. Sitting diligently on my shelf at the foot of my bed are Joy Kogawa’s Obasan and Honouring Our People: Breaking the Silence, a book of testimony by the Greater Vancouver Japanese Canadian Citizens’ Association. But like the hug that refuses to let go (or a teenager that pushes one away), I have been reluctant to open those books.

My avoidance is a little more complicated than the fear of learning about such histories. Unlike some audience members of Japanese Problem, I was aware of Hastings Park as a site of internment during World War II. I was aware of the basic facts of history and the redress movement in the 1980s and 1990s, which made the production of such plays possible today. But holding facts inside the top drawer of your mind is not the same as the knowing that clutches and twists your skin tight, like a newborn baby lying against your shoulder leaking the secrets of forgotten history against you. Kogawa, in her latest book Gently to Nagasaki, describes Marjorie Chan’s play A Nanking Winter as having “begun to scrape scales off [her] eyes” (161).

Kogawa’s image evokes poisoned fish. About how this poison can never nourish hungry mouths. The lie that mandated the detainment of Japanese Canadians was that one people can be saved with the destruction of another. If A Nanking Winter was a clearing of vision for Kogawa,  Japanese Problem was a wet heaviness, a reminder of the baby wailing against this milkless, unnurturing body. The faint smell of poisoned fish in the distance. A pain we cannot swallow.

Eighty years ago today, on December 13th, 1937, tens of thousands of people were murdered and raped by Japanese troops in Nanjing. I was born in a hospital and lived in the city where the ghosts of this tragedy still linger. While watching Japanese Problem, I remembered the unease of my initial breath. Forget Fright Night. This place has been haunted long before. Here at Hastings Park was a meeting of ghosts from either side of the Pacific.

Instead of cushioned seats facing a singular stage, audience members were asked to follow actors into different parts of the stable. The act of moving as an audience and being given the freedom to sit down or stand up at a site of trauma was uncanny. We did not have the choice to change history. But this bodily agency, only restrained by the subtle social obligation of being respectful audience members, left us with the equally grave and uneasy responsibility of witnessing pain.

Towards the end of the play, actors reflected on the stories of the stalls that will never be told. I wondered whether a play, however brilliantly produced, was enough to grieve the loss of such stories. And was I worthy of being part of that grieving? In one scene, the actor playing the nurse tosses a bundle of cloth—representing a baby—onto the small cot. Cloth that will never be able to stand in for the lives of real infants who died here. She exclaims, “I can’t do this,” hinting how privileged the theatre form is and how visceral it is to bring intergenerational trauma to bear within it.

Sometimes those of us who read and write about traumatic histories toss away the blankets of our work too. I pick Obasan off my shelf and open it: “There is a silence that cannot speak” (n.p.). I close the small book in my lap: “But I fail the task. The word is stone” (n.p.). I open the word document. I close it. 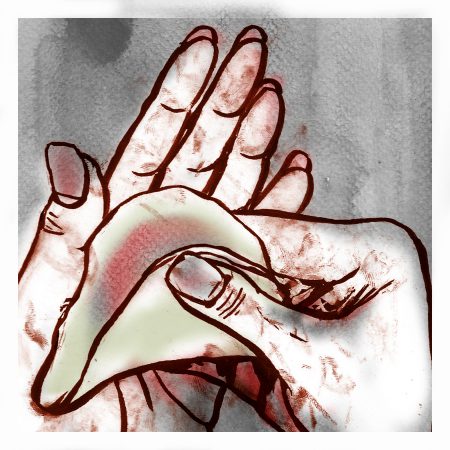 Not a single Japanese Canadian person incarcerated in sites like Hastings Park brought back those killed in the Asian Pacific War and beyond. Or prevented a single woman or girl from being sexually enslaved within the comfort women system. Not a single person blamed for injustices committed by those who look like them or who share similar identities elsewhere brought such injustices to bear. Today, my wrist hurts from over-using my laptop and phone. I scroll through my newsfeed, banging my hand over and over against the rungs of blame. The blame hurled at whole peoples (Muslims, Mexicans, Indigenous people, Black people, Jewish people, Chinese people) as though thirst can be quenched with mercury. When I stop scrolling, the Site C Dam continues to pose a threat to the Peace River. Women are still violated, missing, and murdered. Glass condos remain erected against bodies of the poor. And the pain lingers.

Unlike some of my friends, my family survived World War II on the other side of the Pacific. The Japanese imperial army dropped bombs on my family’s homes. We did not live through the toil of Gold Mountain, the Head Tax or the Chinese Exclusion, but instead through the tumult of the Great Leap Forward, the Cultural Revolution, and the Tiananmen Massacre and Protests. Some of my other friends’ families were (and still are) deeply impacted by Japanese imperialism and colonialism across Asia, such that, upon hearing it, the term “Japanese Problem” has a much different connotation than it does here in North America.

I am alive today because of the table, rooftops, and mountains that hid my grandparents. Yet the shrapnel that landed in my grandmother’s leg, along with many nationalistic and nation-building processes, hardened a prejudice in my grandmother against Japanese people. On both sides of the Pacific pervades a pain too large for a generation to stomach. One time while bussing from Chinatown, a Shanghainese grandmother told me how much she hated being here in Canada, and how evil the Japanese who harmed her and her family were. She cautioned me against going out late. Then suddenly, she spoke out against gay people, not knowing I am myself queer. But as the only person on the bus who could understand her, I felt that I owed this grandmother—who found little support for her emotional and physical pain in Vancouver—my ears. As I turned to get off the bus, she thanked me vigorously.

Such is witnessing. Being present with another’s pain. Listening to our own. Holding the baby and rocking her back and forth, realizing that she is not just a metaphor. How far we have to go before healing roars louder than the thunder that is our competing pains. Before we realize there ought to be room enough for all of us. Where it is unimaginable to detain and dispossess and disperse peoples with the dull and indifferent coolness of policy and law. Whether it is from their land on Turtle Island, or their houses in Japantown or Steveston, their community at Hogan’s Alley, their homes in Chinatown, or their tents at Oppenheimer Park. Whether it is bodies that society refuses to understand or care for, abandoned at the outskirts and left to withstand the toxic fumes. How we still have to hold these sweet ones close.

Last summer, I made spam musubi for participants of the Powell Street Festival at Oppenheimer Park. I’m no chef, but wanted to take up this work because—more than discussion panels, talks, plays, poetry readings, and sometimes even marches—feeding people makes me feel helpful. Sometimes when we talk, we do not listen, and sometimes when we listen, we feel helpless and cannot find the words to say. But when we offer food to each other we do not need to know what keeps us from speaking. Our mouths become busy with what feeds us. What nourishes us, if we let it, might heal us.

Such is history. The pain my body felt after watching Japanese Problem is a hunger that comes back knocking frequently. There is always more work to do. But there are also times when I wonder if I can shape my pain into a mooncake, fold it into a dumpling or gyoza, press and seal it like rice against spam against nori. Not as a living memory or a thunder we cannot hide from, but as food that can be offered to hungry ghosts. As milk to calm the baby. I wonder if you will come eat at my table and whether I can eat at yours. I wonder when I am fed, I can finally let myself read Obasan.

And feel worthy of telling my truth.

And feel worthy of listening to yours.

Jane Shi is a Han Chinese settler currently living on the traditional, ancestral, and unceded territories of the Musqueam, Tsleil-Waututh, and Squamish peoples. She wants to live in a world where love is not a limited resource, land is not mined, hearts are not filched, and bodies are not violated. In the mean time she will fold dumplings, trace poetry out of the shadows of the english language, and dance the unknown rage within.

Note from author: Deep gratitude to the queer and trans Nikkei in my life who listen to me and allow me to listen to them. May we continue to feed and share with one another. Japanese Problem is recorded and playing at the Nikkei National Museum & Cultural Centre as part of their Hastings Park 1942 exhibit until January 2018.