No one chooses the circumstances they are born into – not their birthplace, ethnicity, socio-economic status, none of these. But that does not stop a dark side of humanity from using what is outside one’s control against them. To combat selfish attempts to withhold and restrict, nature has given rise to counterweights like decency, compassion, courage, determination, creativity, activism, and justice. Paul Nguyen and his team at Jane-Finch.com embody all these and more as they work to deliver change that will empower their misunderstood, marginalized, and beloved community Jane-Finch, Toronto neighborhood of 85,000, nexus of 120 different nations, home to speakers of 100 different languages, and a hotbed for some of the finest examples of cross-cultural collaboration and multi-culturalism in the world. 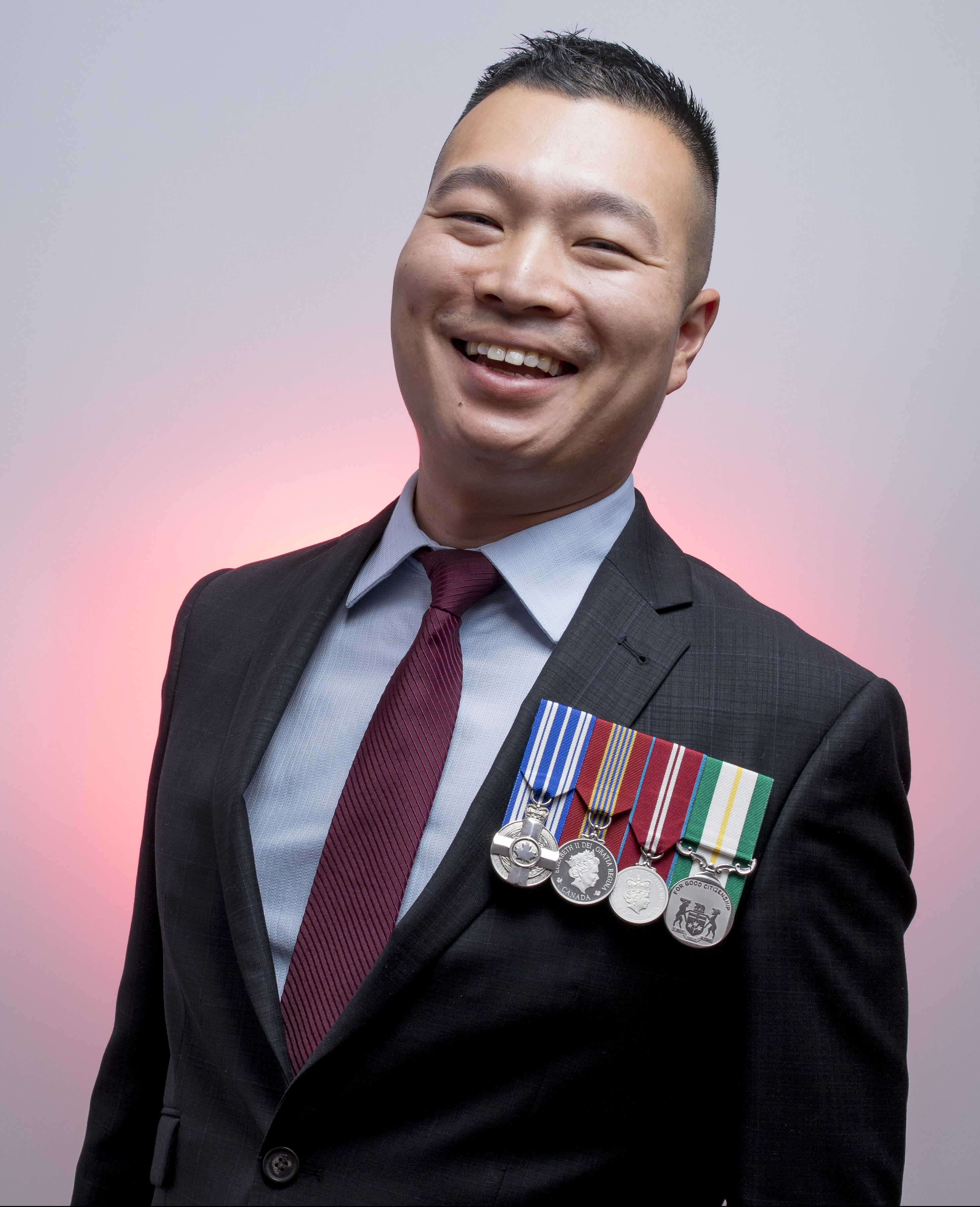 I discovered Paul’s work in a piece by Sam Lee for Ricepaper from spring 2006. I thought with all the new friends we have made over the years since then and the progress we have seen with inter-cultural relations, this would be a great time to (re)introduce Paul’s world. Check out our interview below where Paul recounts his beginnings as a shy kid who first found a voice in Hip Hop, then a vehicle in film, and then a platform in the world wide web, all of which would become instrumental in his campaign to bring to light the indomitable spirit, vibrancy, and successes of his community that is so often found defending itself and pushing for ways to level the proverbial playing field. Jane-Finch is proof that change is possible when there are people willing to fight for it.

RP: Thank you for connecting with us, Paul. We admire the work you and your team do in Toronto, specifically the Jane-Finch area and we are so proud of all the awards you and the team have received throughout the years including the Governor General and Prime Minister’s Diamond Jubilee for fighting stereotypes and being a role model and mentor for at-risk youth. To start, you have referenced shyness at a young age. Are there any external factors that contributed to this and do you have any advice for others looking for ways to manage this?

PN: I was naturally an introverted and shy kid. I carry those traits today. I was lucky to have many public speaking opportunities through my website, Jane-Finch.com. Whenever I speak to youth, I encourage them to find their own voice. They don’t have to be the loudest person in the room to be heard. They can express themselves through art, music, writing, or they can use the Internet. 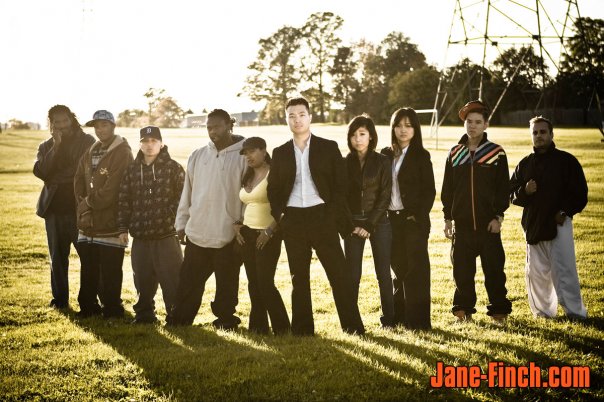 RP: As a child, how is it that you found yourself comfortable with Hip Hop culture as opposed to others? What was there that appealed to you that was not elsewhere?

PN: As a child, Hip Hop found me by accident. I studied film at York University and I needed to do a project, so I decided to do a music video. Someone introduced me to a Vietnamese-Canadian rapper called Chuckie Akenz. Hip Hop music and culture is prevalent in my community. You could call it the voice of the streets. It became a natural fit and the roots of Jane-Finch.com.

RP: Can you remember the day when you decided to get involved in social issues? What was that event that got this ball rolling?

PN: Growing up in a neighbourhood with a bad reputation, I’ve always found myself defending where I came from. I would think most residents are activists by default. However, I began to cover social issues through my website because some locals demanded it. I experimented with different types of video coverage and became enthralled by the many important issues concerning the area, such as racial inequality, socio-economic challenges, and the roots of youth criminal behaviour.

RP: What have you worked on recently?

PN: We always have small or big projects on the go. But I am personally focused on doing stuff outside of the neighbourhood. For example, I was invited to Regina, Saskatchewan to speak at the Saskatchewan Visible Minority Employees Association (SVMEA) about diversity. In the past, I participated in national projects such as for the Canadian Race Relations Foundation, and I have also served on various judging panels for government or industry awards.

RP: I discovered there is now a new subway station, “Finch West.” Improvements to infrastructure and technology can greatly improve the well-being of a neighborhood. What problems existed before that necessitated this station? What solutions do you think this will bring?

PN: Transit was always a big problem in Jane-Finch. Many residents rely on public transit to get to work and school. With the new Finch West Station, there’s shorter travel times, and also more people can come to experience the area. There should be greater connection to the rest of the city for us, and I think local businesses will benefit from the increased convenience as well. 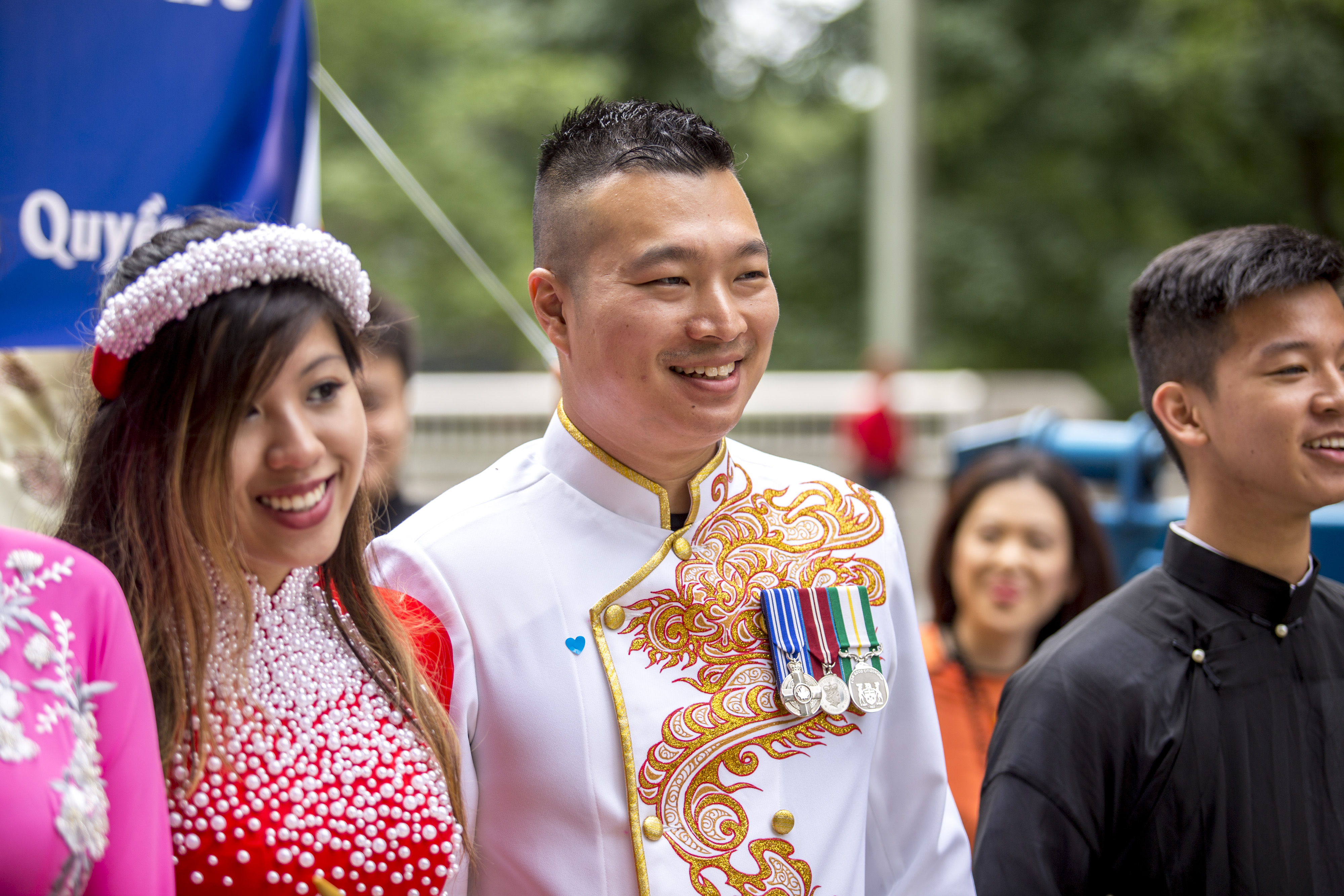 Canada Day Parade with Vietnamese Community in Toronto in 2017

RP: Some communities claim to be diverse where they have a lot of different cultures present but members keep to their own groups and there is not a lot of interaction or collaboration. The feeling I get is that Jane-Finch is not like this. What are your thoughts?

PN: Many areas claim to be diverse, but the proportions are lopsided. Jane-Finch is truly a vibrant mix of people from different racial origins and religious backgrounds. The best example is at various plazas.

Yorkwoods Plaza has a Vietnamese Pho restaurant, beside a West Indian eatery, also next to a Jamaican Fusion restaurant. We have the flavours of the world at our doorstep.

RP: What is on your wishlist?

PN: In a first world country, there are many opportunities, but also many barriers for various people – especially those of colour and people with disabilities. For example, persons of colour feel it can be difficult to climb the corporate ladder, and we don’t have many visible minorities represented in government. Typically, leadership positions are dominated by a homogeneous group. We also have issues in a big city like Toronto where people of colour feel mistreatment or are profiled by authority figures. The list goes on. The fight for justice and equality continues. I hope that society will be fair to everyone. We’re heading there but we have a lot of work to do. I hope people will work together with their governments to eliminate all discrimination. 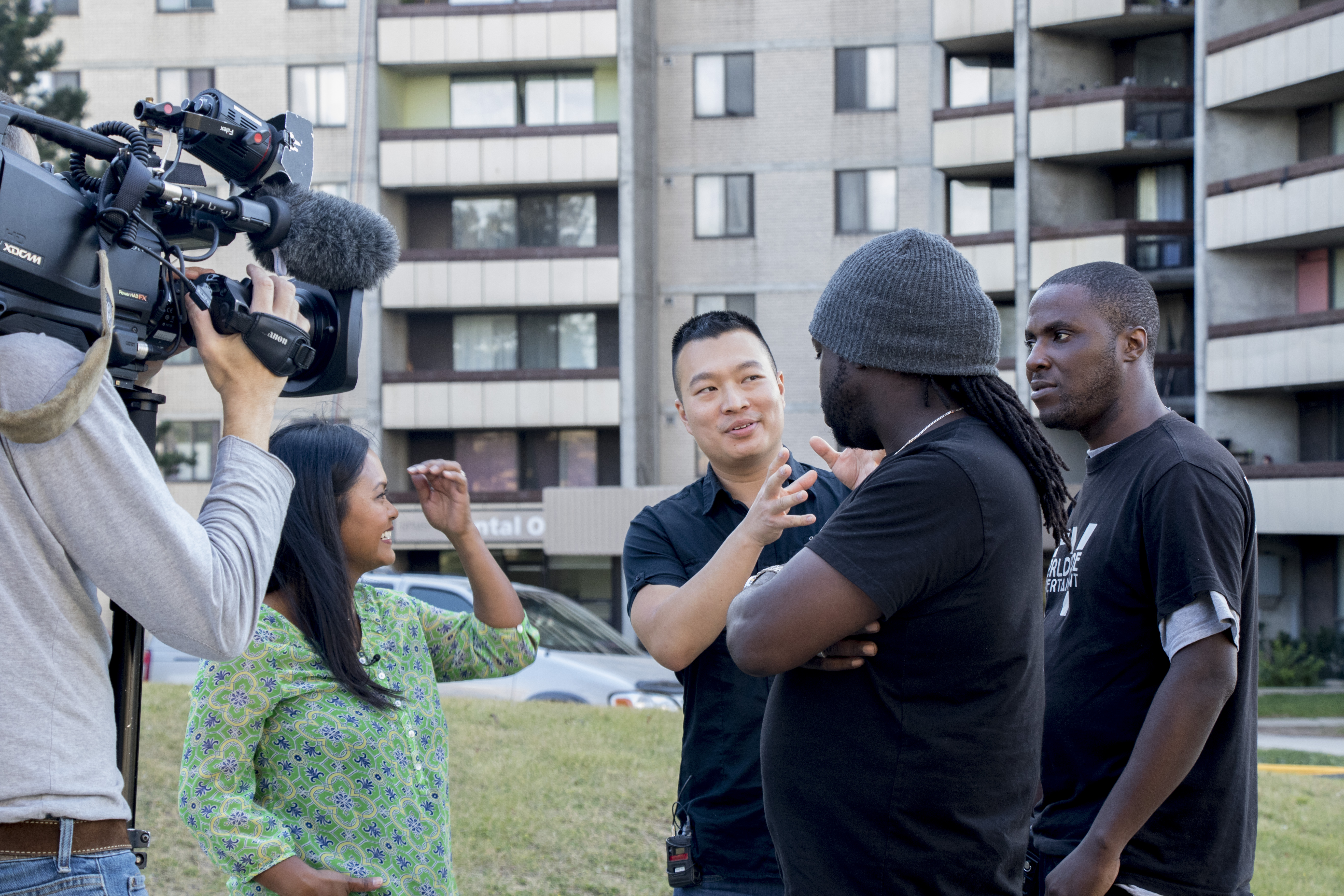 RP: When do race issues stop being relevant? What needs to happen?

PN: Race issues become irrelevant when we stop talking about it. Hopefully one day, people will judged by their actions not by their appearance. Jane-Finch.com is just my small way to help break down racial stereotypes and get people to understand each other better.

RP: In your 2006 article, you mentioned wanting to see an accurate portrayal of Asians in western media. More than a decade removed from that piece now, what is your opinion of that media landscape today? Is there anything you want to see changed?

PN: It may seem like things have improved for Asians in the mainstream media. We have a few more characters and shows with Asians. However, stereotypes still persist and we need more Asians to get involved in the decision-making and creative control aspect. There’s more work to do and I am excited to see the new voices who are paving the way. 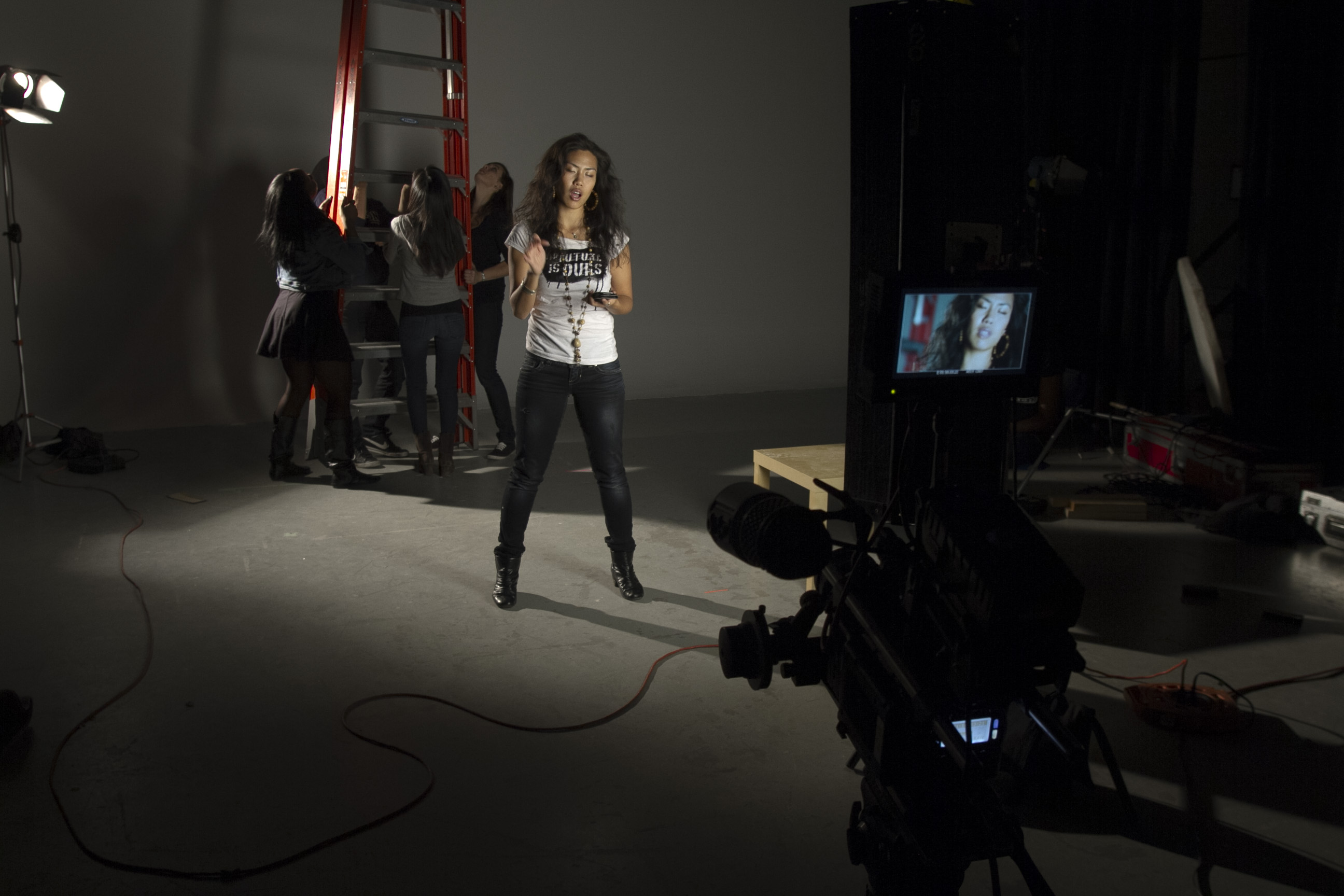 RP: Do you have some favorite posts from Jane-Finch? Which ones would you say “There is a lot on here, but this needs to be seen first!”? Why?

PN: Our rap videos receive the most attention. However, there are so many gems on the site. I don’t have a favourite, but some videos stand out as informative even though we filmed them years ago. One to check out is when the UN’s Gay McDougall visited Jane-Finch to talk to residents about minority issues. It was very interesting to see a high level international perspective on our local issues.

RP: Last, the web is about a lot of things and one of those things is food, a topic especially effective in bringing people together. What are your favorite eats around Jane-Finch?

PN: Jane-Finch has many great food spots and the deals are amazing. We used to have a Greek take-out spot at Yorkgate Mall that served a souvlaki meal for five bucks. Prices went up a bit since then, but it’s still a steal. We have jerk chicken, and many other staples. Just head to the mall and you will find something pleasing!

RP: Thank you, Paul! We look forward to continued success and more great stories from Toronto!