#ThrowBackThursday: A Brief History of the ACWW by Jim Wong-Chu4 min read 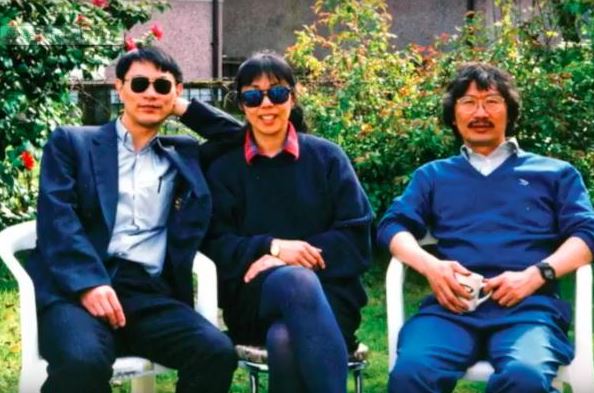 The Asian Canadian Writers Workshop can trace its origins to the late sixties during the time of the Vietnam War, the Afro-American movement and other Third World minority movements. In Vancouver, the Cultural Revolution in China influenced local politics and unleashed the first of a series of Asian immigrant waves beginning with those who fled the 1967 riots of Hong Kong. During those heady times, a group of UBC students, inspired by a radicalized visiting Asian American professor began the process of re-examining their history and identity. They formed the Asian Canadian Coalition, hosted a conference and created historical exhibitions on campus. The ACC’s Chinese component was called Gao Hing, the Japanese component was the Wakayama group.

During the Seventies, some of the Wakayama group started the Powell Street Revue and produced “Images for the First 100 Years”, a slide show which later became a documentary film. The Chinese Canadian Writer’s Workshop formed to publish Gum San Po (1974) as a way to educate the community and provide a creative outlet for its writers. Gum San Po lasted only two issues but saw the debut of Sean Gunn’s satirical piece, “Lofaantown “, a tour guide’ s view of ‘Occidental’ Vancouver in response to numerous tiresome tourist articles about visiting (inscrutable and exotic) Chinatown.

Some members went on to establish Pender Guy, an En­glish language Chinese Canadian radio program on Co-op Radio (1976-1981). The program provided coverage of up-to-date events and issues in the community as well as locally produced music, historical documentaries, and creative skits. During this period, much of the leadership was provided by Garrick Chu who unfor­tunately passed away late 1979.

In 1976, The Chinese Canadian Writers’ workshop and Powell Street Revue join forces to develop Inalienable Rice, an anthology project which was finally published in 1979. The Asian Canadian Writers’ Workshop was established towards the end of 1979. Its earliest membership included Paul Yee, Sean Gunn, SKY Lee, Rick Shiomi and Jim Wong-Chu.  During this period, the group functioned more as a means for internal communication and to nurture ideas and legitimate each other’s projects (Larissa Lai and Jean Lumb, from “Neither Guests Nor Strangers “- Yellow Peril Reconsidered). Following Inalienable Rice, ACWW went on to develop a special Vancouver edition of Asianadian magazine (vol. 3 No 2, Fall 1980) and followed-up with a special edition of The West Coast Review (Vol. 16/1/Summer 1981) and assisted in Many­ Mouthed Birds, Contemporary Writing by Chinese Canadians (Douglas & McIntyre, 1991). 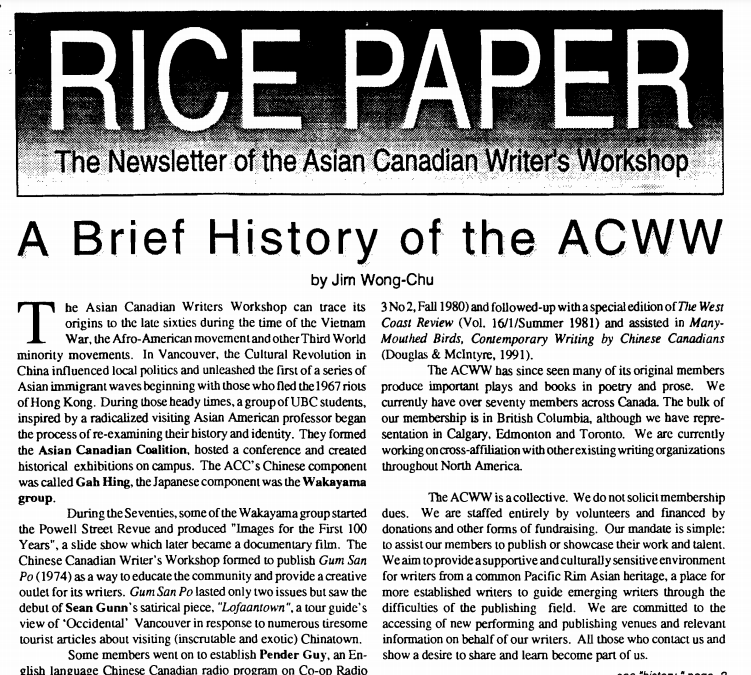 Inaugural issue of Ricepaper Magazine, originally a newsletter to its ACWW membership.

The ACWW has since seen many of its original members produce important plays and books in poetry and prose. We currently have over seventy members across Canada. The bulk of our membership is in British Columbia, although we have repre­sentation in Calgary, Edmonton, and Toronto. We are currently working on cross-affiliation with other existing writing organizations throughout North America

The ACWW is a collective. We do not solicit membership dues. We are staffed entirely by volunteers and financed by donations and other forms of fundraising. Our mandate is simple: to assist our members to publish or showcase their work and talent. We aim to provide a supportive and culturally sensitive environment for writers from a common Pacific Rim Asian heritage, a place for more established writers to guide emerging writers through the difficulties of the publishing field. We are committed to the accessing of new performing and publishing venues and relevant information on behalf of our writers. All those who contact us and show a desire to share and learn become part of us.

At present, our collective has since broadened to three disciplines: Poetry, Prose (fiction and source group which in addition to writers, non-fiction) and Performing Arts. This is to include actors, producers, directors, editors serve the unique requirements of each area and production and design people in all areas of more effectively. Performing Arts is for stage, film, and audio-video. The intent is to members whose works have a performance allow writers better access and interaction with component, such as poetry, songwriting, all elements of the process. This group has a drama and screenplays. This group has a new name to more accurately define itself: The Asian Canadian Performing Arts Resource.

This #ThrowBackThursday article “The History of the ACWW” was written by Jim Wong-Chu, originally published in Ricepaper Magazine’s inaugural Fall Issue, Issue 1, Number 1. Would you like to read more of these retro pieces? Stay tuned for more.

Issue 1.1 the words from Jim are very much alive. Pure and purposed in creating what became the safe haven community we have today.
Keep the #TBT coming!