Obachan is a force to be reckoned with. She guides me through Tokyo Station with the speed and efficiency of someone less than half her age. Her body, eighty-three years in the making, carries its own weight, its own burdens, and its own memories. Obachan’s papery-thin, wrinkled hands gently tug on my smooth, tanned arm, heavy under the weight of my bag.

It’s mid-August, Obon season, one of the busiest holidays in Japan; train stations are more packed and confusing than usual. The pilgrimage to one’s hometown is marked by the commitment of visiting dead ancestors, waiting for the spirits’ arrival, their odyssey. The station, one of the busiest in the world, feels like a small nation all on its own. Its residents are the travelers; the foreigners, gaijins, and the locals, intermingling in a sea of chaos and passports. Its language is the intercom, calmly listing off arrival times. Obachan continues on through its systematic passageways. We travel from one crowded JR station to the next, until we finally find our way back in her living room and share matcha ice cream with each other.

My grandmother grew up in Ginza to a middle-class family during the Second World War. A small, frail child, she suffered through many immune disorders, one of which almost cost her life. American military personnel stationed in Tokyo after the war provided her with life-saving antibiotics. These are some of the only details that I know of her early life. Last summer, my cousin Reiko told me that Obachan’s father owned an auto shop in Tokyo. I now realize that this is may be the reason why Obachan races her small, shiny lilac-tinted car around like an Indy 500 driver with a lead foot down the Indianapolis Motor Speedway. Her resistance against old age is inspiring yet terrifying. Parts of me ache to be able to sit down and risk my terrible Japanese skills with her. Less signing with my hands. She is eighty-three and she knows as well as me that her time is coming. Each time I pick her up at Pearson Airport, and each time my extended family meets me at Narita’s arrival terminal, I am startled by her skeletal-thin appearance. Strong as she is, she still cannot transgress time and age, death and decay. I delete all of my translation apps. I begin to listen instead to the rhythms of Japanese speech and its conjunct melody.

Ojichan sits in the threadbare armchair; rice cake in arthritic hand, he chews absentmindedly while flicking through NHK. Nervously, I press my hand on the glass pane of the wooden door, entering the living room, clutching the red passport in my honey-coloured hands.

“Ojichan, mite kudasai?” I ask, handing him the passport.

Through my stilted Japanese, I offer him the only physical recognition I have to my homeland. Taking the passport into his age-spotted, dry hands, he flicks through it and excitedly points at my photo.

“Very good. Good any country,” he points to the passport with his index finger. He gives me a small smile, almost imperceptible; Ojichan hands me back the red passport. I take it, bowing to him meekly, “Arigatou gozaimasu, Ojichan.”

His attention turns back to the television, distractedly continuing to eat his rice cake, taking a sip of the cold Sencha Obachan made for him. 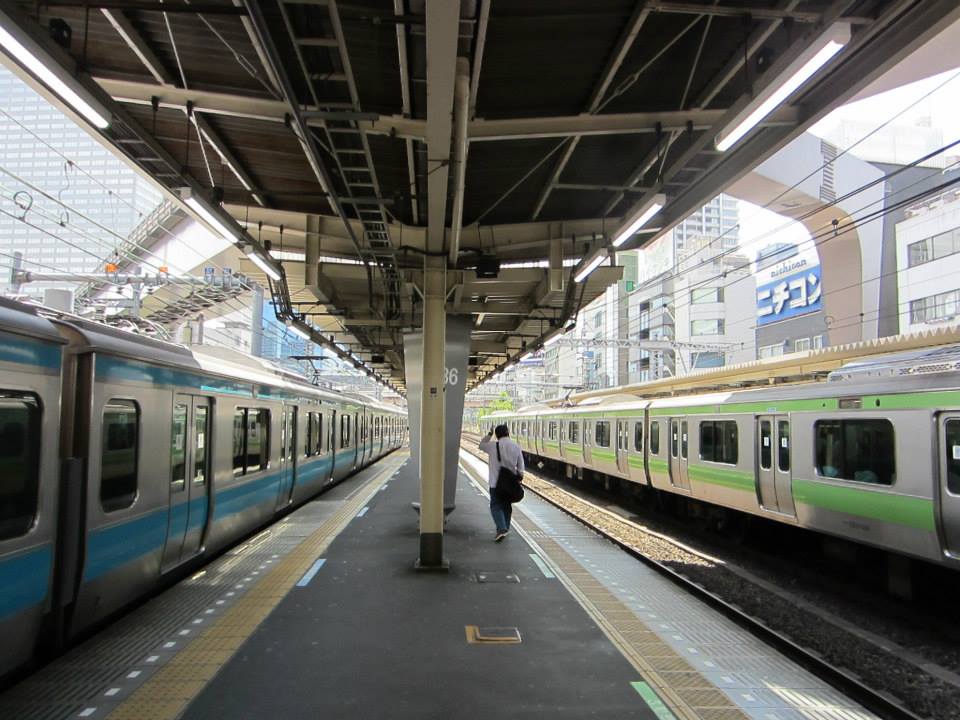 Careening across the countryside, Sam and I soar across green tea fields and past houses huddling together against the modern expansion of cities. The Shinkansen takes us on this journey one hot, hungover summer day. I remember the sweat, salty and warm; it dripped beneath my backpack, seeping into the white linen I wore. The only relief one can find is when the sun turns itself in for the night, creating a limitless landscape. It’s in these places of limitlessness that I discover the visceral feelings of connection, being found in my transience.

Upon arriving in Kyoto, I spend the day walking around blistering hot streets. Because of Obon season, many have returned here. Kyoto is a refuge from the metropolis of Tokyo, but still remains a battleground for tourists. I think about Obachan while I walk these streets, as I bear witness to families being reunited and ceramic incense dishes being placed in shop windows. Obachan, frail like old lace, told me that Kyoto is a magical place, a site for artists and traditionalists, a mecca of salvation. The ancient city streets have winding alleyways and matcha sellers, tea shops and woodblock art studios. These spaces hold me as I stumble through language barriers and mispronunciations, ashamed of my lack of fluency, yet more ashamed that growing up, I pushed Japan from me so far east. I claim it now and I claim it in those moments when I use Google Translate while meeting new friends from around the world as we sit by the Kamo river surrounded by guitar players, drinking Asahi until the sun rises. It is here where I notice that the cigarette smoke curls like ribbons in the midnight air. Hues of blood orange neon light reflects off my skin like a watercolour palette, its pigments bleeding and burning into one another. Their static crackle radiates as I walk by. The night melts before my eyes while the cacophony of drunken tourists rings out, drowning out the sound of the cicadas’ mating calls, pints of amber-coloured beer clinking in the open doorways. Steam rises from bowls of savoury noodles in curlicues like the smoke. One can hear faint jazz music bopping and languishing, skipping down crowded, winding yokochōs. Red paper lanterns flutter slightly as I amble past, my nose filled with the scent of day-old fish and the incense from the shrine nearby. The cobblestones give way under my searching feet like scratched vinyl, repeating themselves mercilessly through these twisting and winding side streets. Legs wobble under the weight of the beer holding my body down. The salacious comments whispered out of the cracked lips of old men, inhaling drags of cancer, add to the soundtrack of a warm August night. I continue searching for the endless light of the convenience store; its humming bulbs highlight the rotting persimmons I saw abandoned on the road and the plastic bottles of cold tea that the tourist group from the Midwest chucked aside because it lacks the familiarity of sugar. Behind every corner and every single body in the street smelling of fatigue and flash photography, I crane my head to follow faded blue street signs I can’t read, in a forgotten mother tongue, searching for the clinical, fluorescent bulbs that will hum and glow and accept my entrance like a homecoming.

Lisa Tower is a Japanese-Canadian writer currently finishing a degree in English literature from Ryerson University. She focuses on themes of transience, travel, urbanity and the diasporic experience.