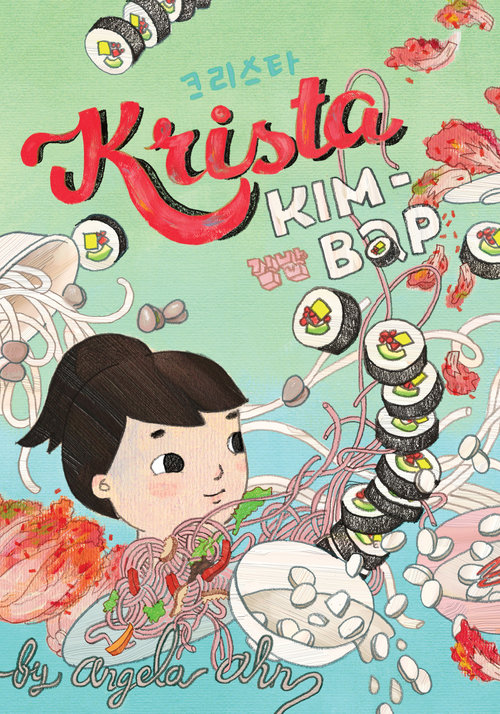 I am a debut children’s author. It’s probably worthwhile noting that I am Korean-Canadian. I am a 45-year-old SAHM, living in a leafy, affluent, mostly diverse and eclectic neighbourhood in a part of the world where there are often fewer white people around than other kinds of people. I know “affluent” “diverse” and “eclectic” don’t sound like they go together, but they do where I live. But this neighbourhood is nothing like my childhood. I grew up very working-class, in a neighbourhood working-class families could afford. My dad worked in a sawmill on the edge of Fraser River for over twenty-five years, hauling lumber. My mom held jobs as a cleaner and as a line worker in a fish factory. Somehow, my parents managed to raise 3 daughters who have a fine collection of six university degrees, hanging proudly on the wood-panelled walls of an aging Vancouver Special.

My children know nothing of sawmills or fish factories. They attend public school in French Immersion. If I look at their most recent class pictures, I see a multitude of ethnic backgrounds and children of mixed races. Their classes have children with non-traditional family structures and children who are self-exploring gender identities. We are an English-speaking house that occasionally slips into cringe-worthy French (the parents, not the kids) and we lean heavily towards Korean food, but we also like tacos, a lot. Don’t forget the tzatziki. My son considers it a food group. My world is full of colour. Could it be more colourful? Absolutely, but still, pretty darn rainbow-like.

I often stand behind white kids in line-ups and I marvel at what they eat here in rainbow-like Vancouver. Once, a couple of white teenagers buying instant spicy Korean noodles and aloe vera drinks, really got my attention. I get the feels when I see a white kid drinking bubble tea. Then, the other day, at a bakery where you can get a steamed Chinese saipao bun, a blonde boy bought two buns. He turned to his friend with warm buns in his hands and said, “Don’t forget to peel the paper off the bottom. Try it, you’ll like it.” Warm and fuzzy cross-cultural experiences, right? This is where I live.

I was excited and nervous to have my book, Krista Kim-Bap accepted for publication by Second Story Press. Writing a children’s book was never a life-long passion or goal. It was something that just happened. I didn’t stride elegantly or confidently into publishing; I stumbled, like a patched-up Frankenstein plodding my way awkwardly into the literary landscape. Incredibly, I had made it. I climbed the insurmountable slush-pile and got myself published after a year of casual submissions and without a literary agent.  I’m here. A “diverse” debut author who wrote a book featuring a young Korean-Canadian girl. Did you check out that flying kimchi on the cover? I was feeling pretty good.

Now comes the learning curve. I’m a public figure. Gulp. Goodreads reviewers. Who are they and why do I care so much? Cough. Trade Reviews. Kirkus? School Library Journal? Faint. Subtle forms of racism.

Wait, what? My idyllic sense of racial harmony was in for a rude awakening.

The first hint of it came upon my first big review. The reviewer didn’t like my book much. I tried to be stoic in the face of my first public criticism. I told myself that fiction, like all art, is subjective. I tried to let it go. But what I couldn’t let go was this line:

“Krista Kim-Bap is a book for multi-cultural classrooms.”

It was the last line of the review, the closing, the final punch. At first, I tentatively agreed, but then quickly changed my mind and quietly seethed. Why is a story about a Korean-Canadian girl for multi-cultural classrooms? Why not all classrooms? A feeling kept scratching at me – a feeling I’ve known before. It pestered me until I had no choice but to admit it to myself. This statement felt racist.

What was worse to me was that this was a Canadian review. I can be that flag waving lunatic who refuses to see that sometimes the vaunted Canadian ideals of multiculturalism get swallowed up, but not really absorbed. I forget that my wonderfully “progressive” country can be narrow-minded and insular, and that we just hide things under a veil of politeness and excessively saying “sorry” when we are in fact, not sorry.

The next time I felt like maybe my initial encounter with books and racism was not an isolated incident came in a more subtle way. The misspelling of my book title, in a social media boost by a big name in the Middle Grade fiction world, which was meant to support and endorse my work. The misspelling of the Korean word of the title. Bittersweet irony at its finest. Innocent enough, maybe, but I couldn’t help but feel it was just representative of a larger issue. Unfamiliar foreign words or names can easily be dismissed by a lack of care or ignorance. It’s hard not to notice that white people are the influencers and gate-keepers of children’s fiction. A tweet or social media boost can get your book on the radar of readers, librarians and teachers.  One of them just misspelled my book title, which happens to include a Korean word.

The third incident came while talking with a person who works in publishing and genuinely supports me and what I want to write. He started discussing artists and he threw out a name, and said, “She’s Korean too.” He threw out a really well-known name. I had just read one of her books and she is most definitely not Korean. Dim sum and Chinese things feature prominently in her work. His mistake was not malicious, but it was to me, a haunting moment.  I realized then, that as a writer of colour, this was the kind “honest mistake” I may have to face all the time.

You don’t have to like or read my book.  But the industry needs my book and books like mine.  We need books to show you perspectives that have not been heard in children’s fiction. We need so many diverse books in stores and libraries that you stop calling them “diverse” and simply call them books.

Talking about race and publishing is awkward for me — I just debuted, remember? The dissonance between my daily life and my publishing life is disheartening. Sadly, other writers of colour will probably also have similar anecdotes to tell. These are the kinds of stories we’d rather not be writing. But for anybody who works in children’s literature, who has never faced slights, put-downs and hurtful off-handed remarks about their ethnicity, gender or who they are, you need to know it’s happening. All the time. It’s already happened to me and I never saw it coming.

Call them micro-aggressions. Call them macro-aggression. I call it a lack of sensitivity and awareness. In my case, it was all very subtle, but persistent. Nobody shouted at me or called me a racial slur. Everything was just so polite, but it was there. Don’t give me a seat at the table and then make me feel like an awkward guest.

Like my main character, I grew up being the only Korean-Canadian kid in my elementary school, constantly being mistaken for Chinese or Japanese. I lived in Hong Kong for two years teaching English but looking like I could have been a native Cantonese speaker. Trust me, I don’t speak Cantonese. I’ve travelled all over SE Asia where I was “konichiwa’ed” on a daily basis. I can’t tell you how many times people have spoken Mandarin to me. I get it. I’ve never liked it, but I get it. Being sensitive to what people “are” is hard and confusing.

I get it wrong too.  I was at a bike shop with my son last month. We went back the next day to buy the bike we had been looking at, and the store employee asked me, “Who was helping you yesterday?” I said, “Oh the Chinese guy.” The white fellow responds, “Oh you mean the Japanese guy?” I felt like an jerk and a half.

We are all constantly learning, I hope. I know I’ve still got learning to do. Publishers, editors, reviewers and others in a position of authority or influence – you’ve got learning to do too. Let’s learn together through open, honest discussions about race and publishing. Let’s talk about books written by and about a previously marginalized group of people you’ve never seen in a book before, all while eating some new food you’ve never tried before. I highly recommend Korean BBQ. This job of story-telling, where we can actually influence young minds, is too important for us to not try better.

Angela Ahn is a former teacher and librarian. She lives in Vancouver with her two kids and husband. She is proud to say that the most frequent complaint of her children is, “I need a new book to read!”  She is the author of Krista Kim-Bap.