Interviewer’s note: I met Kevin Chong over Skype in the spring of 2016, shortly after he began supervising my master’s thesis under UBC’s online creative writing program. I was a bundle of nerves, full of all the typical writerly anxieties. Luckily for me, Kevin had an easygoing presence that I found instantly calming. He was realistic about the limitations and challenges of my project, but he was also very reassuring. Over the next year, he ushered me patiently through the process of writing a convoluted, overambitious novel that, though still several drafts from seeing the light of day, was immeasurably improved by his input.

Having been through the process of writing my own novel with him, I was fascinated to hear about the writing process for his most recent novel, “The Plague.” It is a thoughtful retelling of Camus’ classic that handles its diverse cast of characters with intelligence, humour and empathy. It sparked a conversation about the challenges of the creative process, the nature of originality and the possible benefits of contracting tuberculosis.

We corresponded over email. The following interview has been edited for clarity and brevity. 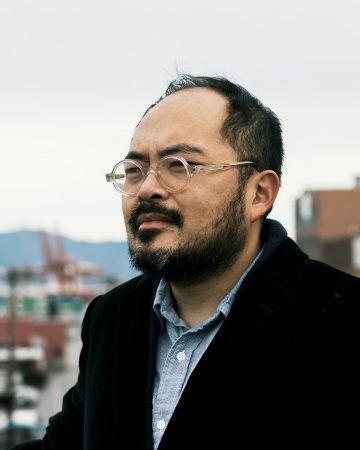 Mason Hanrahan (MH): You have said you initially set out to write an original novel, but didn’t finish. Could you elaborate a bit more on that project? Has it been shelved permanently or do you intend to pick it up again sometime in the future? Why did you set it aside?

Kevin Chong (KC): It was a historical novel set in the early 1900s. I started rereading it recently and couldn’t get more than 15 pages into it. I am not great at outlining, so I started writing it without really knowing what the story was about, thinking I would find the story and double back and rewrite it. I never did. I got caught up in odd historical details—the zipper was invented around that time and was originally given an un-zippy name: the “universal slide fastener.” Maybe at some point, some fix will come to me while I’m in the shower or on a walk, but I am not going to chase it.

It took me two years to complete the draft. I don’t think that time was a total waste. It was the first fiction manuscript I had completed in nearly fifteen years. And in some ways, I think it’s why The Plague could be written so quickly. It gave me some practice in writing multiple storylines in third person.

KC: A retelling, incidentally, is an original novel. For a while, I nurtured the idea of retelling a classic. I tried that once with The Great Gatsby set in China, but I haven’t spent enough time there. When I saw The Plague, it was right after the U.S. election and at the beginning of a bleak winter and so the spirit of the book—of resilience against bleakness—against the tenor of that time gave the idea a momentum.

MH: Did you have any reservations about retelling a classic novel? You’re clearly a fan of Camus. Was it daunting to take on the work of a writer you admire so much?

KC: Not so much. I don’t think I was aiming to insult the memory of Albert Camus. I wasn’t daunted, but buoyed because of the baked-in gravitas of rewriting a classic.

MH: Critics often bemoan the proliferation of remakes, reboots and sequels in film. However, retellings are common in literature. Timothy Findley did it with Headhunter and the Giller-winning Not Wanted on the Voyage. Margaret Atwood did it with The Penelopiad. And on and on. What do you think retellings have to offer for readers and writers? And what do you think about attitudes toward remakes in film vs. literature?

KC: I think retellings can appeal to readers from an intertextual perspective and also speak to the blind spots of the original. With my book, I thought of JM Coetzee’s Foe and Kamel Daoud’s The Meursault Investigation that critique the originals from a contemporary POV [point of view]. I don’t have any specific beefs with Camus, but to update his book to Vancouver, in the present, meant overriding some of his biases against featuring non-white men as protagonists.

I don’t think superhero remakes have those aims.

MH: On a few occasions, you break the fourth wall, a technique which nowadays tends to draw attention to the artificiality of a narrative. However, in The Plague. the technique seems to lend verisimilitude by solidifying the book as an artifact within the world of the story. Why did you choose this technique rather than using an omniscient or first-person narrator?

KC: There could have been a version of this story that eschewed that, one some readers might prefer. I chose that self-conscious technique because of the nature of narration in the original (as a quasi-historical document), but also as a nod to the relationship between my book and the original. As well, I wanted to acknowledge and dramatize the current state of writing and the anxiety around representation and depictions of suffering.

MH: You have said that you wanted to illuminate the way economic disparities affect how people are impacted by an outbreak. This preoccupation with inequality is clear in some of the subplots (e.g., gentrification, monuments to the rich), but almost all of the main characters are middle-class. They are educated professionals with relative financial comfort. Why did you choose to stick with these characters rather than having characters that could give us direct access to the experiences of the city’s poor?

KC: Good question and a valid critique! For me, the jump from the original to a non-white, not all-male cast of characters was the extent of the break I wanted to or could make from the original. There’s also the issue of what my experience allows me to write about and the freighted topic of appropriation of voice that writing from a more marginalized viewpoint might invite.

MH: This is an interesting idea that raises, for me, several questions about where authors draw lines about what they can or can’t write about ethically. Where is the line for you?

KC: It’s a matter of comfort, as it is for many writers, and what your story requires. Getting back to Camus, in his journalism, he wrote the injustice that Arab and Berber people suffered. And in my most recent journalism, I have focused on homeless Vancouverites. As I progress with this project, I realize as I talk to these people that I don’t have the nerve even to ask the uncomfortable, impolite questions it might require to base a character on them. I can write about them, but I need the objective distance that journalism requires. In short, this might be a failure of imagination or nerve on my part.

MH: Going back to the theme of inequality, you’ve said that plagues affect people differently depending on their social station. However, some of the characters, and possibly even the plot, seem to argue strenuously against this perspective. Why did you choose to approach the book in this way?

KC: My strongly held opinion is that a novel isn’t a polemic. A novel shouldn’t editorialize. It’s a space where people with diverging opinions co-exist. Moreover, for better or worse, my own views on things are more often mixed or ambivalent—fifty percent of this, half of that. That’s largely why I stopped book reviewing because my reviews seemed to be more about my outlook than the books themselves. Also, freelance rates suck.

MH: You cracked a pretty legendary pun in the novel when a funeral parlour director told a character she could make a “killing” by selling a grave plot. Do you have any other Vancouver real estate puns you’d like to get out of your system?

KC: Ha, I don’t have any others. While in Montreal recently, I did mention to a friend there that our family had recently been “renovicted.” My friend paused before comprehension followed. “Renovation and eviction?” [It is common for Vancouver landlords to kick out tenants in order to renovate and thereby hike prices.] He wasn’t familiar with this portmanteau word that is commonplace in Vancouver.

MH: The book seems preoccupied with community and how the dynamics of a community change under strain. Unlike a lot of nightmarish and dystopian scenarios in pop culture, your version of a city in the throes of an outbreak is pretty optimistic. There is a riot, but not much more damage is done than after a hockey game in present-day Vancouver. And the main characters, who were not all that engaged in their communities before, band together to care for the sick. How do you think your neighbours would react in the face of a disaster? Would it bring out the worst or the best in them?

KC: Probably both, or neither. I have gotten into the rotten habit of reading my Goodreads reviews and some readers feel like the book could be more dramatic. And while I can see where they’re coming from, that element came from the original. At some point, between some lows and highs, most people just behaved as they always do. Survival takes many forms, and that includes the daily grind.

MH: You noted the parallels between Camus’ mother and Rieux’s, both of whom were housemaids. Did you use any other parallels between the characters and Camus? I’m thinking specifically here of infidelity (Camus and his wife both cheated on each other, as do two characters in The Plague).

KC: Oh, yes! But it’s also a memory of my own grandmother, who cleaned the house of our family physician. (My current doctor is his daughter, who remembers me from those visits to the house and keeps newspaper clippings of my books in her file.) That one wasn’t intentional. In one draft, my Rieux played soccer, like Camus, but I took that out because I liked that character pursuing solitary activities. As for other parallels, Rieux’s father died early, like Camus and Camus’ own father.

KC: Don’t forget Anton Chekhov (another writer, along with Camus, who was in many ways exemplary—dashing, politically conscientious, beloved by his peers—off the page). I don’t recommend contracting any disease for career advancement.

I would tell your friend this about my very modest career: I have blundered upwards. This blundering is for the most part small-bore stuff, but I believe certain attributes have inadvertently helped me: unearned confidence, an inability to over-prepare, and no real drive for perfection. As well, it’s amazing what happens when you just ask for something. You get a lot of “yesses” or at least start the negotiation process.

MH: What’s next for you? Do you have another project in the works?

KC: I’ve spent enough time writing fiction that I feel the need to write non-fiction. I mainly teach it at UBC and after enough time has passed, it’s good to practice what you preach. I’m still casting about for ideas, non-fiction or otherwise, and am open to suggestions…or any ideas worth stealing.

Mason Hanrahan is an arborist and freelance writer/editor working in Ottawa. He was second in the Humber Literary Review’s Emerging Writers Fiction Contest and second in Carleton University’s Creative Writing Competition (twice!). He holds an MFA in Creative Writing from the University of British Columbia, which he will probably be paying for the rest of his natural life.