An Interview with Lindsay Wong, author of The Woo Woo9 min read 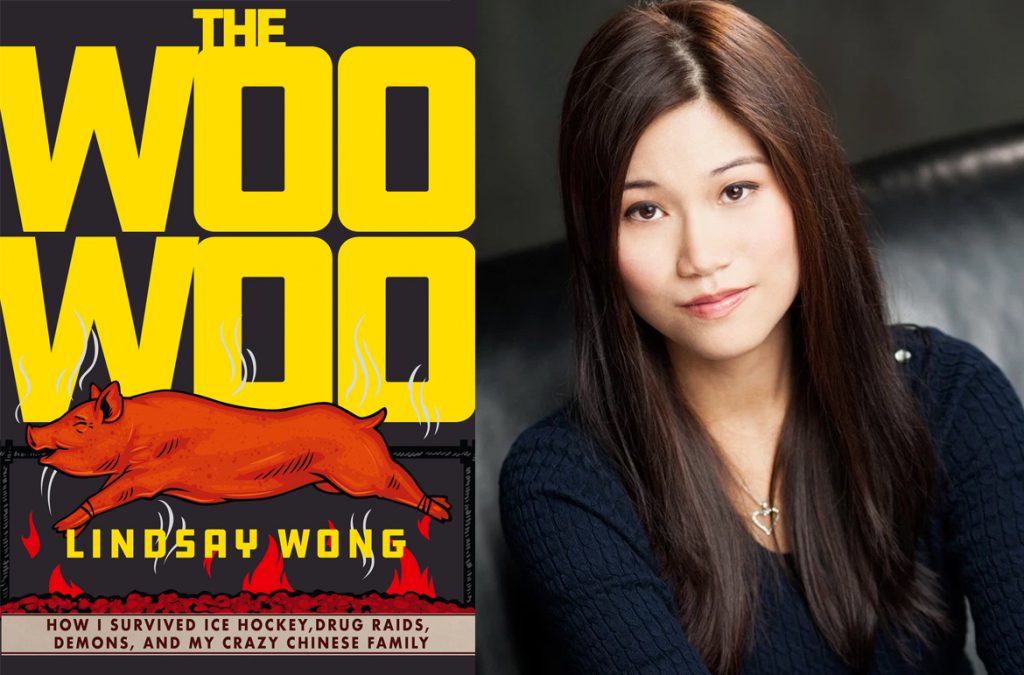 RP: You graduated in the MFA Creative Writing program at the Columbia University. What was that like? How did you decide that you wanted to enter the program and become a writer?

Columbia was very hard, partly because I was quite young at the time and the program had some very experienced writers. There’s a huge difference in age and ability when you’re 22 and the majority of the other students are in their thirties and have already worked in publishing or they’re professional journalists at major newspapers. I was also sick at the time (I had Migraine-Associated Vestibulopathy) so I’d have to force myself to attend my workshops and be able to write on deadline while being bedridden. I think because of my neurological illness, I wasn’t completely able to fully enjoy being in a writing program.

At times, I found the workload at Columbia to be challenging due to youth, sickness, etc, and I was one of the very few ethnic minorities in the program. A couple of professors didn’t quite understand what to do with my work, while some students were just baffled and didn’t know how to give me a critique. I’d get notes on workshop submissions that read: “Even though this family is Chinese, they are very American,” while not addressing the prose at all. And I’d be like, I’m from Canada by the way, and what did you think of my writing?

My UBC mentors ( Linda Svendsen and Kevin Chong) had gone to the program and I wanted to be as accomplished and talented as them. I also wanted to live in New York City. It seemed like it was a very exciting place to suffer as a writer. What I love about New York City is that no one cares what you do on the subway, and you can cry all day for a total of $2.75.

RP: Has your background as an Asian Canadian ever become a barrier to your writing?

I feel that being Asian Canadian or being a POC writer makes it tens of thousands of times more difficult to get published in the writing world. There’s this myth being perpetuated where some white writers believe that because your story might be more exotic, it’s easier for you as a minority to get published, but that’s bullshit. It’s racist. I had someone once tell me at a writing conference that I “was so lucky to be a minority because publishers would want me more,” but that’s NOT true. I had an extremely difficult time getting published, and as my agent will verify, we really struggled to find a publisher who didn’t tell us the memoir was “too niche,” “too weird,” or “not funny.”  We had publishers tell us that we needed to make it more like Battle Hymn of The Tiger Mom to appeal to mass audiences, meaning white readers. I think that if your voice doesn’t fit into what publishers think Asian-Canadian or female immigrant writing should sound like, which is typically soft, passive, and muted, then the publishing world will tell you that your story isn’t relatable to the public.

RP: The Woo-woo is a prominent theme in your book.  Do they continue to appear in your life? How do you deal with them?

Definitely! The Woo-Woo is a ghost that haunts us, whether through physical or mental illness. The Woo-Woo is personal and unique to everyone, I think.  For instance, my Woo-Woo is my own constant battle with fatigue and vertigo. I’d love to be able to do more than three things in a day or stay up past 10 PM, but my Woo-Woo is always there, lurking in the form of a migraine headache that can last months and cause hallucinations. I had an event at The Vancouver Writers Fest at  10:30 AM and another one scheduled at 8 PM, and I remember the stage starting to spin a little because I was so tired, but I really wanted to be there because how often do you get to be on a panel with so many amazing female writers, like Dina Del Bucchia, Uzma Jalaluddin, Carrianne Leung, Shazia Hafiz Ramji, and Beni Xiao.

Sometimes, you just have to force yourself to push through your Woo-Woo and suffer the consequences later.

RP: As an emerging writer, did you ever have doubt that your story would be accepted by audiences, editors, or publishers?   How did you overcome your doubts?

My family and friends describe me as “someone who takes no prisoners.” Attila The Hun was actually my nickname in high school. The Woo-Woo was rejected multiple times. I was diagnosed with MAV (Migraine-Associated Vestibulopathy) and the neurologist told me that I might never read or write again, and I was like, no, I refuse to accept that. I certainly felt moments of discouragement at many points in my publishing journey, but I’ve always had a singular mindset that the right publisher would come as long if I kept persisting.

I think my greatest abilities are having an extremely thick Armadillo-like skin and being able to compartmentalize, so if I receive shitty news, I’ll shove down my disappointment before I’m off trying another route. Rejection doesn’t faze me anymore. It just incentivizes me to keep trying. I have a Chinese dragon tattooed on my forearm. The dragon is the god of hustlers and the patron saint of the relentless and unrelenting. I guess I’m obsessive too. It helps.

Memoir sort of just fell on me.  It started at UBC’s Creative Writing Program in Mary Schlenglinger’s nonfiction class where I realized I had so much material when I first started writing weirdo character sketches of my family, which would turn into this book.  The Woo-Woo would be a horrible novel because there’s way too many strange coincidences, and it would have lazy plotting and character development because real-life is often stranger than fiction. I also wrote YA and fiction at UBC, but nonfiction at the time was much easier for me to write. You have to record and shape experience in memoir, whereas fiction you have to be able to invent and create.

Also, I was waitlisted everywhere for the MFA in fiction, and the nonfiction program at Columbia was one of the only places that would take me!

I have a YA novel (currently titled The Summer I Learned Chinese) which is forthcoming from Simon Pulse in Summer 2020, and I’m currently working on some YA with one of my best friends,  Marie-Helene Westgate, as well as a collection of absurd magical realism Chinese immigrant horror stories.

RP: Has your Asian Canadian background/identity ever given you opportunities that you might not otherwise have had as a writer?

Because I’m Asian Canadian, I feel that I’m so incredibly privileged to be able to draw on two cultures in my writing, and I think my identity and background have shaped my distinct point of view as a creator. I’m not fully Chinese, and I’m not fully Canadian, so having an outsider’s perspective can really allow you to fully experience and witness all of society’s quirks. I think that’s why I’ve always been drawn to writing about dysfunction and insider secrets.

RP: You were recently featured on the front cover of BC Bookworld, with a front cover story.  You’re also featured at the Vancouver International Writers’ Festival, among many other events.   What are your feelings about this new fame?

The attention has definitely been unexpected and strange. It feels completely surreal for sure. I was recently at the Starbucks on Granville and Broadway,  and this one lady wandered up to me and asked me if I was a writer. I pretended that I had no idea what she was talking about, and then ran away! Other than the feeling of constant surprise, it’s honestly a bit embarrassing for me. In real life, I tend to be shy, introverted, and completely afraid of strangers. I am, however, incredibly grateful to all the people who have bought the book and attended the readings and been so generous and kind  to tell me that my story has resonated with them. That means a lot to me. It’s touching and lovely, really.

RP: The theme of migration and travel are important themes in your book, and you even cheekily use the term “Hongcouver.”   How has growing up in this transnational city shaped the way you see the world and how you write?

I grew up in the suburbs of “Hongcouver” where being Asian was being part of an ethnic majority so I always felt this raw and potent connection to Asia, even though I’ve never had the opportunity to travel there. I’m fascinated by how cultures intersect, and how Vancouver has become sort of a mini Hong Kong or Shanghai, as my Asian friends tell me. I think being in a transnational city makes me more interested and invested in being first-generation and exploring themes of diaspora and immigration in my work. Even though I don’t speak Cantonese or have any immediate family back in Hong Kong or China, I am still deeply connected to another culture emotionally and organically. It’s really fascinating the way diaspora works on an intergenerational-level.

RP: What’s your advice for those who want to write and get published? What can they learn from you and your experiences?  Do you have any words of wisdom?

Writing and publishing can sometimes feel like a Sisyphean task. For me, it always feels like I am doing the same exact thing and getting absolutely nowhere. But if you want to be published, you have to be willing to endure the rejections and the judgment of family members who think you are wasting your time and wondering why you don’t have a real job or any money or even health insurance. I can’t afford the dentist and I haven’t bought new clothes in six years so it’s a matter of not being pragmatic and just being passionate and believing in your own work.

I don’t know if I have any words of wisdom, except to take as many writing classes as you can, study with authors that you admire, digest feedback and be willing to revise as much as needed, apply to writing residencies, scholarships and grants, and hope that only your back teeth fall out and that the front ones will make it.  Be willing to be hungry and cranky. But in all seriousness though, a lot of my peers from my BFA and MFA programs have stopped writing, so I think it’s a matter of endurance. How much are you willing to suffer for your art? If I only have $35 in my bank account and it’s a choice of applying for a residency and not eating for a few days, I choose the residency fee, no question.