you watch her heaving chest   where you once lay   sleeping

of kindergarten   eyes suspiciously glued on her face   as

she leaned against a mango tree   beckoning you   to look

ahead   face the mean   blackboard   when you got home

bound for Hong Kong   to wipe tables & scrub toilets   your

elder sisters insisted you now had to wash   dishes & iron

your school uniform   for you no longer had a mother   until

she came back   four years later   when her   employment

contract ended & bribed you   out to a casino   & abandoned

you   in the care of cashiers   at McDonald’s on United

Nations Avenue   leaving you   with a pile of fries & burgers

to dream & forget   when she had no money   left she came

waiting   for you to tell her your name & you listen   closely

for a heartbeat in her chest   where you once lay   sleeping

& it whispers   something   but you no longer remember her

The six-tatami mat room leads to Roka’s dark wood bungalow cradled in a tangle of bamboo grove. The narrow engawa creaks as I enter a shoji door. A woodblock calligraphy in kanji offers a greeting: Farm when it’s sunny. Read when it rains. I follow Footprints in the Snow to a carved rock sitting in a forest of green ginkgo.

rests on my itchy eyelids

I eat a bowl of tororo soba before embarking on a journey in the fluorescent labyrinth of Sunshine City, where people mirror wants in a kaleidoscope. I exit in the suburban dimness of Zōshigaya and locate grave one-fourteen-one-three to recite a solemn dream for the spirit of Soseki. Somewhere near a sakura tree, Sensei’s friend, is also laid to rest.

I walk along a railroad track for the footbridge where Osamu once stood, leaning against a railing, gazing at the sunrise or sunset. It’s hard to tell when things are in black and white. I climb up the unsteady structure. The massive sun renders the sky scarlet, blurring the tracks that stretch to the horizon, as trains slither like snakes beneath my feet. 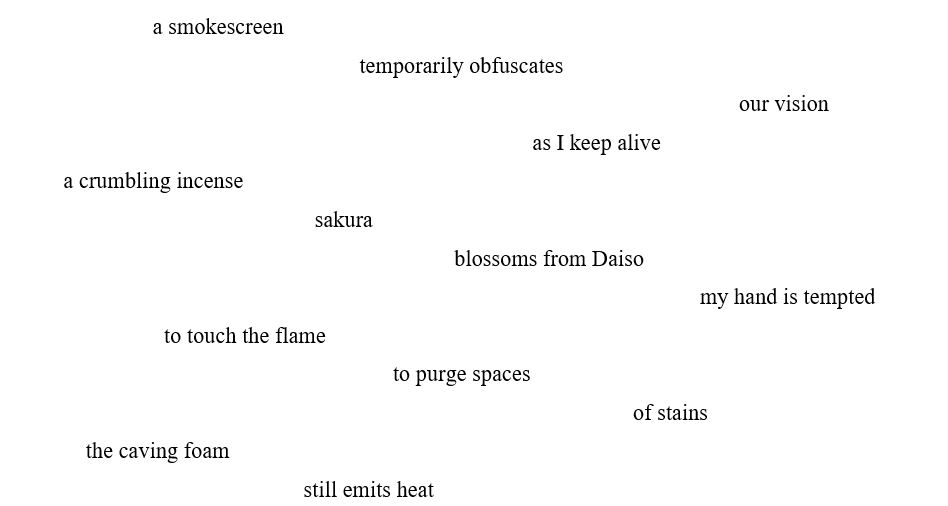 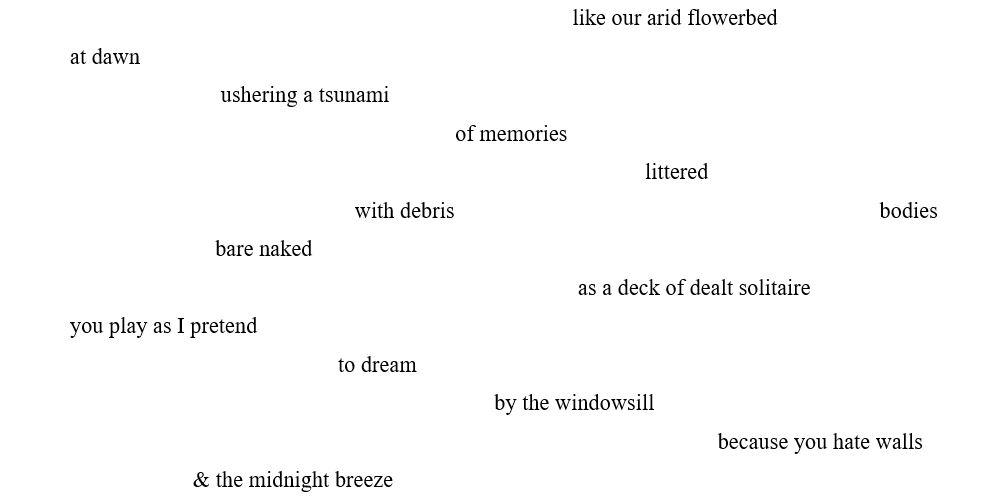 peeled skin that feels not

Marc Perez is an immigrant-settler on the unceded territories of the Musqueam, Squamish, and Tsleil-Wauthuth First Nations. His creative prose have appeared in Ricepaper Magazine and PRISM international 56.3. His poems and short story are forthcoming in TAYO Literary Magazine, Issue 8.