“Did the servant really have snot?: Reviewing the English Translation of Legends of the Condor Heroes” By Jo-Ann Chiu9 min read

When I agreed to write a book review of the first-ever English translation of Legends of the Condor Heroes, I had no idea I would be opening Pandora’s box of not only nostalgia, but also questions about translation and language.

Condor Heroes is a massive 12-volume trilogy written in Chinese by the late Dr. Louis Cha, under the pen name Jin Yong (金庸).

First published in 1959, the original volumes didn’t have individual titles; they were merely numbered 1-12.  Before that, the stories were originally published in his newspaper, Ming Pao, as a continuing fiction series—but that is a history lesson for another day.

The first volume has since been translated into English by Anna Holmwood and named A Hero Born.  The added bonus of giving the translation an entirely new title is that it is easier to distinguish it as the English-language version. 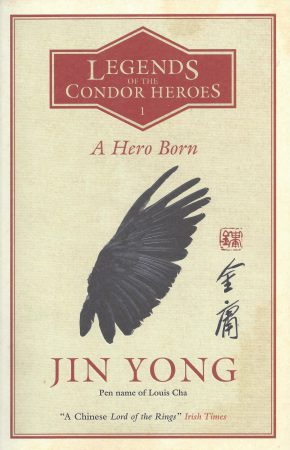 Published in February 2018, Holmwood’s translation has been such a huge success that MacLehose Press plans to translate one volume each year, until the entire set is completed.

Gigi Chang is translating Volume Two, with the title, A Bond Undone.  At the writing of this article, Amazon lists that the title will be available for purchase in late January 2019.  Holmwood is editing that one, while translating Volume Three for its proposed February 2020 publication.

Knowing how different Chinese and English are, I wondered, “Will Holmwood’s translation be reliable?  Can it recreate the effect of the Chinese original?”

For example,  in A Hero Born, Lotus Huang and Guo Jing sneak into the Jin palace.  Lotus injures a servant in order to coerce him into helping them get medicine from the royal pharmacy.

The servant is in tears from pain.  Holmwood describes, “Snot bubbled in his nose.”

I did a double-take.  Did Dr. Cha really mention a detail so funny, about the character having snot?  And did that snot really bubble from the servant’s nose?

This called for a closer look.

The art of translation

“There’s no one way to translate,” says Nick Stember, a translator of Chinese comics and science fiction (and the former translation editor for Ricepaper).  Stember cautions me against making snap judgements when assessing Holmwood’s work.  “There’s no such thing as a perfect translation.  It’s not the English translation; it’s a translation.  It’s like in jazz music, like an arrangement.”

Adding to the confusion, the Condor Heroes trilogy exists in three different editions:  1959, 1976, and 2003.  Each edition features significant revisions by Dr. Cha himself, including characters being edited out entirely, when he later decided them to be superfluous.  The 2003 edition in particular was not necessarily well-received by all fans; some still prefer the earlier versions.

Moreover, Condor Heroes was banned in Taiwan until 1979, so underground versions were produced that barely resembled the originals.

Stember also pointed out that the differences between Chinese and English make translation between the two languages especially difficult.

“Chinese has no verb tenses, no subject, and has lots of freedom,” he says.  “English has more synonyms, more words.  Chinese is more concise and the same adjectives can come up again. But translated directly into English, it can be repetitive.  In English it is considered bad writing if you use the same adjectives.”

By taking on such an ambitious project, of such a famous Chinese literary work, Anna Holmwood is surely setting herself up to be a lightning rod for criticism.   What would compel her to take on such a crazy task?

“The folly of youth,” she says with a laugh.

Anna Holmwood answers my Skype call from her home in Malmö, Sweden.  We spoke twice last year, in August and in September.

“The figure of ‘translator’ is very vulnerable,” she says.  “They mediate between the culture of those who can and can’t read the original language.  You’re their only access.  People can resent you.”

Even more so when the figure is Jin Yong and his legions of fans.

Holmwood, who has a master’s degree in modern Chinese studies from Oxford University, began working as a professional translator in 2010.  Two years into her career, she noticed that Legend of the Condor Heroes hadn’t been translated in English before.  With the debut of A Hero Born in February 2018, she is the first person in 59 years to begin doing so.

“I thought it would be career-defining,” says Holmwood.  She was right.

Success of A Hero Born has “far exceeded expectations.”  St. Martin’s Press has purchased the US rights for the first four volumes and will begin publishing a US version of A Hero Born in 2019.

Given that the 2003 edition is a bit controversial among fans, I asked Holmwood why she chose that one.  Her reason was simple:  That was the edition requested by Dr. Cha’s representatives.  Who can argue with that?

Holmwood completed the bulk of translating the 120,000 words of A Hero Born in 18 months, but in total, it took five years of behind-the-scenes work to bring it to publication.

And yes, there were times when she had doubts and worries about potential criticisms from Condor fans.

In times like these, Holmwood credits her Taiwanese husband, who previously worked in television, for his encouragement and support.  “He said, ‘You can’t stop people from voicing their opinion.  You have to believe in what you’re doing, and deal with the anxiety.’” 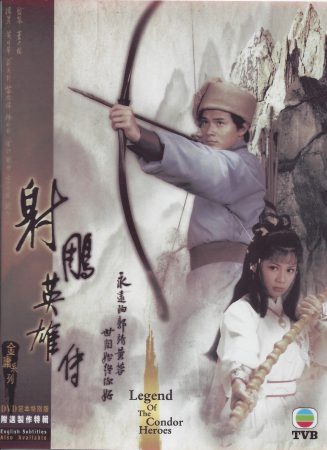 The most hotly-debated topic online is Holmwood’s choices in translating names.  Some allege her of being inconsistent.

Until Stember educated me on how to assess a translation, I also noticed the differences and questioned why Holmwood appeared to be inconsistent.

[For readers who aren’t familiar with Condor Heroes, the actual names of Genghis Khan’s four sons were kept in their original form, whereas the daughter, Huazheng, was presented as a Chinese name.  Huazheng was part of a fictionalized love triangle storyline among the hero, Guo Jing, and his true love, Huang Rong.]

For the character Huang Rong (黃蓉), I looked up “蓉” (“Rong”) in the Oxford Chinese Dictionary.

“There are some dictionaries which do,” says Holmwood. “More often it’s translated into ‘hibiscus,’ and less commonly as ‘lotus.’”

Holmwood explains that she researched Mongolian names and had found that Genghis Khan did have a daughter named Kholjin.  She thought it would be more authentic to use an actual Mongolian name in the translation.

For the record, Holmwood does give detailed responses on why she made the name choices she did.  However, given the limits of our interview time, I felt that I couldn’t do it justice, so I’ve abbreviated her actual response in this article.

[For readers who want to learn more about why Holmwood made some of her choices in name translations, the preface and appendix of A Hero Born gives some explanations.]

The other point that arises from our discussion is the fact that there is a dearth of Chinese-English dictionaries, compared to translation dictionaries of other languages.   Ditto for the names of Genghis Khan’s daughters.  Prior to our interview, I did attempt to research local resources, but couldn’t find any.  My next step would have been to seek a university library and higher levels of help.

Good point.  Holmwood changed the name of Guo Jing’s mother from Li Ping (李萍) to “Lily Li.”  “萍” (“Ping”) actually translates into “Duckweed,” so hands down that Holmwood made the best decision in giving the hero’s mom a more palatable name as “Lily.”

“A translation is never finished,” says Holmwood.  “In 10-15 years’ time, maybe someone will come up with an alternative translation of Condor Heroes.”

But until then, Holmwood’s is the only one.

Yes, the servant really did have snot

But it didn’t bubble.

In English, “nose mucous” has a serious connotation, such as when speaking to a family physician.  If you want to be funny, usually you will use the word “snot.”

Chinese only has “鼻涕” (bítì) for nose mucous and is neutral.

Using Stember’s tip as a guide, Holmwood did a great job.  She did alter the translation, yes—but for the better, and she did it without altering the character of Dr. Cha’s text.  Kind of like taking someone whose face is already beautiful and applying makeup skillfully on it.

I did some more spot checks.  The original draft of this article featured more examples, but it began to read too much like an academic dissertation.

What I learned from this journey is that a good translation isn’t necessarily about a word-for-word, dictionary-like approach.  That could get tedious, especially if the two languages have very different structures, such as Chinese and English .

What’s important is whether Holmwood can capture Dr. Cha’s talents as a writer:  the unique personalities he forged in his characters, his wisdom of human psychology, and his sense of humour.  I would say she did.  And it looks like I’m not the only one who thinks so.

Most touching for Holmwood is when people of American-Chinese heritage let her know how happy they are that because of her, they can now read and enjoy the full text of Condor Heroes in English.

“That really moves me,” says Holmwood, “because I’m half-Swedish, so I know what it feels like to have two cultures that you are immersed in, but one you still don’t have full access to because you’re not a native speaker.  Hearing that kind of feedback makes me feel like it’s all worthwhile.”