“Family History” and other poems by Yoshika Watson4 min read 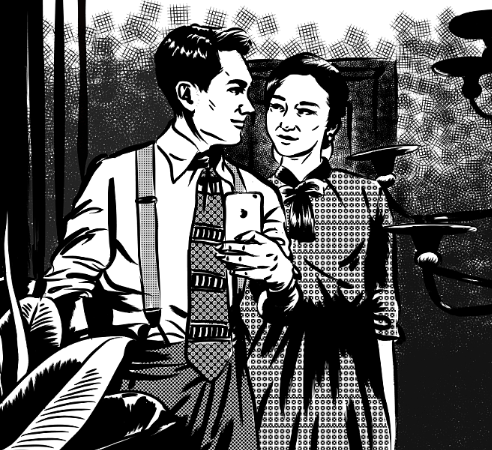 We thought my life

was following the same

curves as yours, Mama

but I was slowly

of a möbius strip

and when I finally

the inverse of you.

but did you know

that when life looped

back again, we would

be on opposite planes?

I ran away from

Months have folded into years yet

you’re still not married. You said,

“after college, Ma.” so I held

onto that paper thin promise

as years folded into years.

I see you read and reread directions

when folding an origami crane,

when trying a new karaage recipe.

You worry that you’ll make a mistake

but never think to consult my advice.

My hands are creased and crumpled with age

they remind me that I want to be a grandma.

My hands will teach your future daughter

until she doesn’t have to look at the directions.

Until I was a mother my life was a blank

sheet of paper waiting to be shaped.

I want to help you find this same blessing

but now I worry that you’ve grown

paper wings to fly away from me.

When my mom was growing up in Saitama

she was a tomboy who liked competitive sports.

she would challenge her friends to play

her friends nicknamed her “Skeleton”

when they learned that word in English class

and compared it to her lean athletic body.

I wish I got to meet this version of my mom

When my dad was growing up in Wisconsin

he had never seen the ocean and had only

been to two states. What he knew was sitting

between his parents in a pickup truck,

inhaling a cloud of their cigarette smoke

as they argued about bills and kids.

While my dad took it all in, I imagine that

he dreamed up his own future family,

one that wasn’t complicated by divorce.

When my parents met in New York City

they both knew they were ready to get married

but neither one knew just who they would marry.

They left that decision to a man who matched couples

by pointing at them one by one, drawing

from a crowded room full of eager men and women.

Meaning was assigned to these new couples:

proof of their commitment to the movement,

an active step toward world peace,

and the promise of sinless children.

They thought it a blessing to be in that room.

After years of being told he was too young,

my dad was relieved to finally have a wife.

And my mom couldn’t stop herself from thinking

Sometimes I wonder what other lives

my parents would have it they weren’t matched.

If the choice was their own, who would they pick?

For my mom, I picture a cosmopolitan life in Tokyo.

She would marry a salary man who would give

her gifts from business trips abroad—

perhaps tea from London and sweets from Taipei.

My dad would create a quaint Midwestern life

with a housewife who wears necklaces with

the type of wife who fundraises for the PTA.

But I always stop there. Yes, these lives

would make more sense than reality

but believing in them would mean taking

all that I know and swirling it together,

forming small whirlpools until it all dissolves.

And I can’t because I have always wanted to live.

Yoshika Wason is a mixed-race Japanese American Nisei who is a teacher currently residing in Japan. She is a former Editor-in-Chief of ASIAM, an Asian Pacific Islander American literary magazine, at Boston College. Read her chapbook “Extra Bold” and other work here: https://yoshikawason.wordpress.com/

Na Wang is a part-time illustrator from China. She is interested in illustrating and photographing. You can find her at her personal website:  http://www.zcool.com.cn/u/14231696