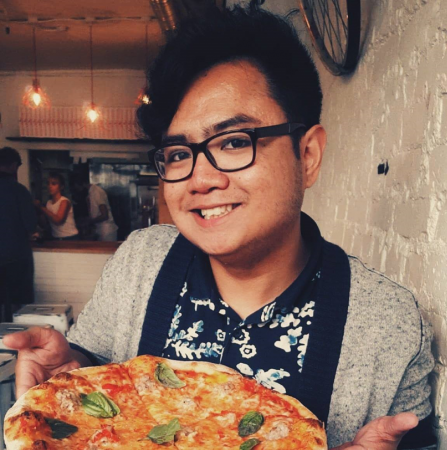 Carlo Javier is a freelance journalist and emerging fiction author. He was the editor-in-chief at The Capilano Courier, a student-run newspaper in Capilano University. His short story, Janitors, will be published in the upcoming Immersions anthology by the Asian Canadian Writers’ Workshop and Dark Helix Press.

Javier mostly tackles issues related to the Filipino-Canadian and Filipino immigrant experience. His graduation thesis, The Nanny Diaries, investigates the experiences of Filipino women working as nannies and domestic workers in Canada. His upcoming crime thriller short story, Janitors, follows a rookie janitor as he uncovers an intricate web of underworld cleaners and a spy network made up of Filipino-Canadians in the service industry.

Vincent Ternida (VT): While the hidden underworld economy of assassins and cleaners isn’t new in genre fiction as featured in your short story, Janitors, you’ve made yours stand out by featuring the less featured perspective of the cleaners by adding the Filipino voice to the mix. What inspired you to take this direction?

CJ: As with many works of fiction, there’s a bit of realism into that. I have Filipino friends and family who either supplement their incomes with janitorial gigs or build their incomes on the foundation of janitorial gigs. It’s nothing to be ashamed of seeing as honest work is honest work at the end of the day, but almost all of the janitors I know are entirely skilled and experienced in their respective lines of work/education prior to janitorial—it just so happened that these skills and experiences were honed in the Philippines, and as we know, accrediting overseas work (especially from the global south) is not exactly the norm in Canadian industries.

If we are looking at specifics, then two things come to mind in terms of inspiration: I did a story on the living wage campaign organized by janitors at Capilano University and more than 3/4 of the janitors at the school are skilled Filipino immigrants. This led to an interaction with a union worker who himself used to be a janitor and had done the research that 60% of all janitors in the Greater Vancouver area are Filipino.

The other inspiration is just a random morning when I walked into the Royal Centre Mall by Burrard Station—through the entrance sandwiched between McDonald’s and Tim Horton’s—and everyone that worked in both restaurants were Filipino. It was like entering a portal back to the Philippines…granted it’s not janitorial, but the service industry nonetheless.

VT: Before you made the transition to fiction writing, you were a journalist, being the editor-in-chief at The Capilano Courier. What pushed you towards the direction of literary writing?

CJ: I think I was just looking for a more creative outlet. I had been in journalism for 6-7 years now and I kind of started becoming more unsatisfied with telling the stories of other people—not that their stories were uninteresting or anything like that—it was just that I felt an increasing urge to tell my own stories.

I was also unemployed at the time and was a year away from graduating with a Communications Degree from Capilano University. I was born in the Philippines, but very much educated under the Canadian system. I was aware of the stereotypes that Filipinos in Canada get lumped into—I did my undergrad thesis on it! (The Nanny Diaries)—and was genuinely fearful, to be honest, of the realistic possibility that I might become a janitor as well. By chance, I came across your book (The Seven Muses of Harry Salcedo) through PhilippineCanadianNews.com founder, Ted Alcuitas. We had a conversation about fiction writing and you know, things just came to place on its own.

I guess the short answer is: I had a genuine fear about something that is entirely possible, I didn’t want it to happen, so writing a fictional story about it seemed like the best way to come to a resolution.

VT: There seems to be a contrast with your protagonist’s motivations versus the supporting character (SC) as the protagonist is Filipino-Canadian while the SC is a Filipino immigrant. In your opinion and observation, how do the differences between first-generation immigrants and the children of immigrants influence the writing and perspective in your stories?

CJ: There certainly is! And that’s one of the periphery themes that I wanted to convey in that story. The protagonist is predominantly based on my experiences as a Filipino-Canadian that Wikipedia defines as “1.5 generation,” having been born in the Philippines and immigrating at 12 years old, just right before my formative teenage years. The SC is based on the many immigrant Filipinos I know who moved here either in their late teens or early 20s and they are immediately set back even further because they’re subjected to upgrading their hard-earned education, even though they’re at the age when working and generating income becomes a responsibility.

Ultimately, it’s a deeper conversation about the nuances of an immigrant identity. I know a number of Filipino-Canadians who were born here and either have never been to the Philippines or have only been there as tourists, and may not even speak a lick of Filipino, but have a yearning desire to get in touch with their roots and to know more about their ethnic background. On the other hand, I also know a number of Filipinos who moved to Canada at a later stage in their life and are faced with the challenges of adapting, or even assimilating, to a new culture, environment, and language in order to survive.

There’s a bit of a commentary on privilege in there as well. The fact that I can pursue fiction-writing, knowledge, and self-actualization, and you know, dreams, is a testament to my privilege. Seeing as there are so many Filipinos my age who have to dedicate their time and effort towards infinitely more important things like paying bills, providing for their families, or sending money back to the Philippines. I guess in a way, it’s a self-critique.

VT: Your new short story, “Algorithm of the Heart,” tackles a more speculative territory. The story moves from featuring both immigrants and children of immigrants to a purely Filipino-Canadian perspective. Could you comment on the change in direction from “Nanny Diaries” and “Janitors?”

CJ: With Algorithm, it’s almost like a culmination of an early to mid-20s identity crisis. The story comes from very real human experiences that anyone regardless of background and identity could face and it comes at a time when I’ve become comfortable with being a Filipino-Canadian. I started Algorithm a month after I turned 25, which also happened to be the same month that marked my 13-year anniversary in Canada. There are small hints of racial critique and commentary in that story, or at least the making of that story, but ultimately, I wanted to write a piece where the protagonist goes through issues we can deem to be universal, like a break up, or the problems borne out of an unhealthy relationship with social media, and it just so happens that this protagonist is Filipino-Canadian.

VT: What do you plan to write in the future?

CJ: Probably some things around either superheroes or magic realism. I know that every story I write will feature a Filipino main character, but whether their identity is a driving force or not, I’m not really sure. I do want to write more about social media and interconnectedness. And I also want to look into classism and privilege. I especially want to work on a story that juxtaposes the life of a Filipino-Canadian who was able to move to Canada by way of the Live-In Caregiver Program, and another Filipino-Canadian who moved to Canada by way of having the money, but that’s probably for somewhere down the road. At the moment, after Algorithm, I’ll be working on a story about a superhero.

Carlo Javier will be reading excerpts of his new short story Algorithm of The Heart at Sampaguita Perspectives: A Celebration of Filipino-Canadian Writers on May 14th at 6:30 p.m., at the Vancouver Public Library’s Montalbano Theatre, 350 West Georgia Street, Vancouver. This event is co-hosted by the Vancouver Public Library in partnership with the Vancouver Asian Heritage Month Society. Carlo’s short story, Janitors will be released in Immersions: A Speculative Fiction Anthology, published as a collaboration between Asian Canadian Writer’s Workshop and  Dark Helix Press.