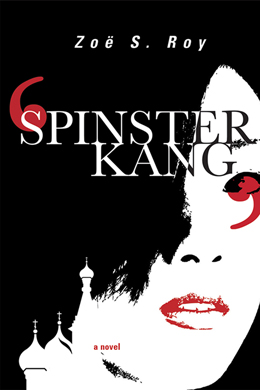 Zoë S. Roy is a Toronto-based writer who has always been an avid reader, even during the Cultural Revolution.  As a writer of literary fiction, Zoë focuses on women’s cross-cultural experiences. Her work includes Butterfly Tears (2009), a collection of short fiction, and two novels, The Long March Home (2011) and Calls Across the Pacific (2015), published by Inanna Publications.   Her most recent novel, Spinster Kang, has just been released. Ricepaper interviewed Zoë as part of its continuing focus on Asian Canadian writers.

You are an author of a number of books, including Butterfly Tears (2009), a collection of short fiction, and two novels, The Long March Home (2011), Calls Across the Pacific (2015). How is Spinster Kang different from your previous books?

Spinster Kang explores the protagonist’s experience of culture shock in the new country. A sense of humour along with an intercultural comparison percolates into the story.

What inspired you to base your main character, Kang, who is labeled a spinster at age 32? In China, particularly in urban areas, women marry much later in life, or not marry at all, so I’m interested in knowing why Kang is already a spinster at such a young age by Western standards?

There’s a long story behind my protagonist. In 1993, Gu Cheng, an exiled Chinese poet in New Zealand, killed his wife, Xie Ye, before he hung himself. The death of Xie Ye haunted me, and her acceptance of her husband’s lover in sharing their lives together puzzled me, too. I imagined that if Xie Ye had survived, she would’ve been terrified by men. Several years later, I wrote a short story of a confirmed spinster who distrusts and fears men because of her sister being a rape victim in China. After coming to Canada, she tells a gay friend about her sister’s story that not only releases her from dismay in the past but also gradually helps build up her trust in men. The story was written in a series of dialogue without a good storyline since I was at the stage of learning how to create plots. Unsatisfied, I put the story on a back burner. However, that story didn’t die out but grew stronger in my head over the years. Then I continually made cross-cultural comparisons about the different social conditions for women and their love affairs or relationships; I also imagined how a woman who distrusted men would change in a different culture. Nearly two decades later after Xie Ye’s death, I wrote about Spinster Kang as a novel.  So to speak, that life tragedy has inspired me to write my character, Kang.

According to a Chinese tradition, grown-up women must get married; otherwise, people would treat you as an abnormal woman or even as if you were an alien. In contemporary China, many women receive higher education and have a career, but these women spend more years on education and (a) career development so that they can’t get married around 25 or to say before 30. They are called “leftover women” —“剩女” in Chinese. According to a Chinese saying, “A man by the age of thirty should have accomplished his goals,” but this milestone age for unmarried women implies that “you’re at a doomed age and become undesirable.” “Leftover women” is a name tag for these women while “spinster” is a particular nickname for Kang.

Interracial romance stories are rare in more traditional societies, one in which China is still known to be regardless of its modernization. The relationship between Tania, a Russian woman, and her Chinese boyfriend was broken when the Communist government found out. Could you tell us more about this relationship in this novel?

The interracial relationship between Tania and her Chinese boyfriend, Kang’s father, faced a harsh situation in Mao’s era during which the Chinese people were absolutely controlled by the Communist Party that decided food and accommodation, education and employment, what to think and say, and what to read and write about. Kang’s father was chosen to study in the former Soviet Union, which was a brotherly country of China, but a relationship with a Soviet citizen without the Communist Party’s permission wasn’t allowed. And then, the relation between the two countries went sour after Nikita Khrushchev, the first Secretary of the Communist Party of the Soviet Union, denounced Stalin and Stalinism in 1956. The personal life of Kang’s father was decided by the Party—this is a made-up story. If readers are interested, they could read the memoir, Son of the Revolution, by Liang Heng. In the story, the author obtained permission from Deng Xiaoping to marry his American lover in 1979. But Kang’s father didn’t have that luck; not only was he forced to leave his lover, but he was also branded a rightist after that because of his love affair with a Tania—a foreigner. In other words, the interracial relationship between Tania and Kang’s father was in the hands of the Communist Party of Maoist China.

Kang seeks advice from her friend Nancy who says, “Well, you’re strong, but think about yourself. I mean, think about whether you can live with Brian if it turns out that he is schizophrenic. It will impact your life as well.” I agree with Nancy and think there is a strong bond in the relationship between Kang and Brian, and Kang is capable of maintaining the relationship if Brian has this illness. Schizophrenia is a health problem. However, with medical help, with self-discipline and aptitude to cope with it, a patient could be successful in life and have a career. My ten years of experience in teaching a class of in- and out-patients at the Centre for Addiction and Mental Health and my friendship with some people with schizophrenia, especially with an elderly woman, helped me gain such knowledge. Some of my students were intelligent and had an extraordinary memory. The movie A Beautiful Mind, based on the biography of John Nash has proved that schizophrenia didn’t prevent him from being a genius mathematician. In my opinion, as long as the people with the disorder seek help from mental health professionals and receive treatment, schizophrenia can be controlled. The people are still able to achieve their goal if they have one. For example, the elderly woman I’ve been acquainted with, at the age of 70, gave a piano lesson every day, and at the age of 80, she still trained a student once a week. The key to her overcoming schizophrenia is that she’s been going to the mental health services for decades, and she has a strong sense of responsibility both for herself and for her adult children who have the same problem.

What authors inspired you in your life as a writer? Who have you met along the way in your career that has influenced or helped you in your writing?

There are too many authors to name. Let me put it this way, when I grew up, the classic literary works by authors all over the world not only provided me with cultural and literary nutrition but also sheltered me from the miserable reality of Maoist China. In 1977, after years of being not allowed to go to university, I became a student and majored in English, finally getting my chance to study British and American authors and their works academically. Along the way of growing into a writer, many things have been influencing and helping me, such as the support from family and friends, readers’ and reviewers’ feedback including the negative ones, getting published, receiving rejections from publishers and literary agents, and things that catch my eye and make me think, as well as reading and reviewing books.

You are quite a prolific writer, having published four books within a decade. What are you working on your next project? What is your next book project going to be about?

Compared to many prolific writers, I’m not one, but I’ve been trying my best to fulfill my passion. I’m almost ready to start a new book project. Here’s my preview: a Chinese girl abandoned at birth grows up with her adoptive family in Canada. One day she decides to look for her birth mother in China. Her adventure makes her vulnerable to human trafficking.