Song Lang has been making a splash since it’s release, garnering 26 international awards including the Best New Director Award at the Beijing International Film Festival, Gemstone Award for Rising star Lien Binh Phat at Tokyo Int’ Film Festival, and Audience Choice for Best Feature  at the Frameline San Francisco International LGBTQ Film Festival. Prior to Song Lang, he had directed two short films, Dawn (2012) and Talking to My Mother (2014), both multiple award winners as well.

Ricepaper’s JF Garrard had a chance to catch up with Leon as part of VQFF to ask him about his latest film Song Lang and the art of film making.

JF Garrard (JFG): Hi, thanks for taking the time to connect with us! Your film Song Lang, is your first feature length film. Was it difficult to make the transition from short films to a longer full-length feature? How are they the same or different? 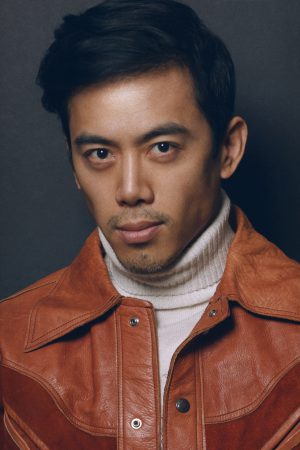 Leon Le (LL): It wasn’t a particularly difficult transition for me. I always like to spend plenty of time first focusing on the script and making sure it is telling the story that I want. Once the script is solid, streamlined, and clear, then you can use that as your map to guide you through the project. Rather than focus on the magnitude of one epic project, I tried to focus one day and scene at a time, as if I were working on a series of short films, which all eventually cumulated into this feature film.

JFG: I confess I’ve never heard of Cải Lương until I saw your film and it reminded me of Chinese Opera although the melodies and tones of the songs are quite different. Can you explain a little bit to non-Vietnamese audiences what Cải Lương and Song Lang are?

LL: Cải Lương (roughly translated as “renovated theatre”) is a form of modern folk opera and is particularly famous in southern Vietnam. It is the convergence of southern Vietnamese folk song, classical music, tuong (a Chinese based classical theatre form), and modern spoken drama. It originated in southern Vietnam in the early 20th century and blossomed in the 1930s under the French colony as theatre for the middle class.

Song Lang is a Vietnamese percussion instrument used to control tempo, phrasing, and signal the beginning and the end of musical passages in Cai Luong- traditional Vietnamese opera. It is the rhythmic foundation for both instrumentalists and performers and is considered the soul of Cải Lương. When the words are separated, each component takes on a different meaning – two (song), men (lang).

JFG: What was the inspiration behind making this film? Why was this film named Song Lang?

LL: Growing up in Saigon, Vietnam, all I wanted as a child was to become a Cải Lương performer. Then when I was 13, my family and I immigrated to the States, and that was the end of my dream. Now,  almost thirty years later, Cải Lương is a dying art form. I wanted to capture it on screen and share it with the world, thus also fulfilling my childhood dream. The title of the film, Song Lang, has a double meaning. It’s the name of the percussion instrument that sets the tempo of the music, representing the rhythm of life, which guides the artists down a moral path. The title is also a play on words, literally meaning “two” (song) “men” (lang). 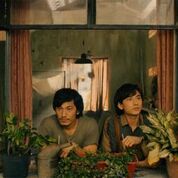 JFG: The two main characters Dung and Linh Phung become closer as the film progresses, however, at the same time there is an unspoken barrier in regards to physical contact and letting others know about their relationship. Was this intentional and why was it important to show this?

LL:  In most of the gay films that I’ve seen, sex and nudity have become an unnecessarily dominant part of the storytelling. I wanted to see if I could engaged the audience in the gay love story without even a slightest hint of those sexual elements. (This is something I’ve also done with my two previous gay short film Dawn and Talking to My Mother) Also, I think wonder and unfulfilled desires are the things that haunt us the most. The choice to have no physical contact between Dung and Linh Phung has nothing to do with Vietnamese culture or the government’s censorship. In fact, I had to fight very hard with the producers to keep the film the way it is, as they wanted more physical contact between the two characters. In their opinion, the film was not “gay enough” and the relationship status between the men was “not clear enough.” I wished to leave the relationship a bit more ambiguous and allow for the audience to decide for themselves.

JFG: What message do you hope the audience walks away with after viewing Song Lang?

LL:  I don’t wish to dictate a specific message to my audience. I’d rather each audience member approach the story with their own life experience and form their own opinions. It’s much more interesting for me to be the vessel by which the story is brought to the audience.

JFG: Have your previous experiences of singing, acting and dancing on Broadway, tv and films helped you in your director role and how?

LL: I think it is always a huge benefit for directors to have some acting experience background. It helps you understand and relate to what the actors are going through and their process.  From then it will be much easier to communicate with the actors to get the performance that you want from them.  My musical theater background became very helpful with Song Lang since there are a lot of stage performances in the film.  Especially with the singing and movements, I can specifically demonstrated what I want, as well as offer them certain techniques to achieve the needed result.

JFG: What is your next project?

LL: With the success of Song Lang, more opportunities have openend up for me to continue directing. I am trying to be discerning in selecting my future projects based on passion and what truly inspires me. At the moment, I have a couple of projects in process, but filmmaking can be a bit of a waiting game at times. I tend to stay quiet about things until the development and production process is further underway.

JFG: Do you have any advice for future film makers?

LL:   For beginning filmmakers, the important thing is to create the film that you want to make, not the film that you think others want to see. On that note, all directors should learn how to write a screenplay. And when in doubt, write about things that you know and truly understand. Authenticity is what will make your work stand out.