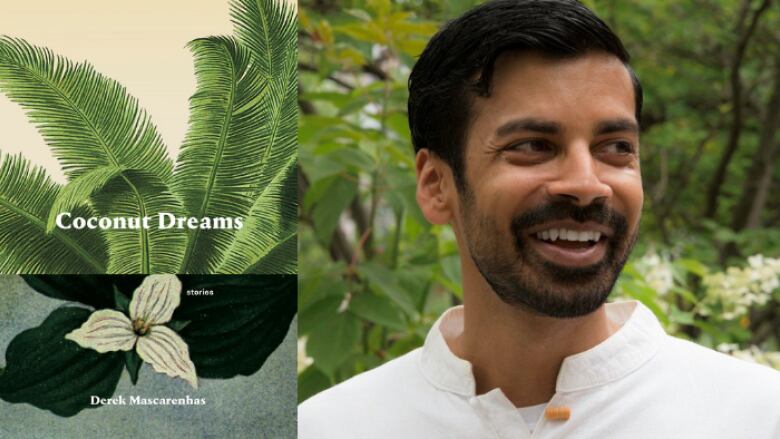 It was the start of Fall in Vancouver, around 6:30  pm, the time in Toronto was three hours advanced. It was the time of my phone interview with Derek Mascarenhas, author of Coconut Dreams. Our conversation started out about his experiences with Word On The Street in Toronto. As our conversation about his book unfolded, it was an exchange of ideas about story, the diasporic narrative, and his future visits to Vancouver as a featured author at Vancouver Writers Fest on October 21st to 27th.

Coconut Dreams is a collection of short stories about the experiences of Aiden and Ally Pinto, two second generation Indo-Canadian children of parents originating from Goa—growing up in Ontario. As they go about their youthful adventures, they encounter situations that are common for children growing up North America that don’t completely identify with the visible majority.

Derek’s prose carries a sense of magical wonder. In The Elephant On The Mountain, what starts out as a rehearsed childhood tale unfolds as a tapestry of wonder that carries the reader into folklore that comes to life through their imagination. The Call of the Bell and Coconut Dreams are two intergenerational tales about Goa, with the first from the point of view of Ally and Aiden’s parents, as children, growing up in their village. It is juxtaposed with the latter, the perspective of a young man who was born outside of Goa and experiencing the place for the first time. My personal favorite would be Private Property, a tale of innocent romance between two childhood friends as they navigate the tumultuous nature of their awkward feelings.

Vincent Ternida (VT): You mentioned Coconut Dreams was a book you wished to read as a child. During the 90s, where diverse literature was sparse, what books did you have in its stead?

Derek Mascarenhas (DM): I grew up loving to read. I liked fantastical stories with young characters in difficult situations. Roald Dahl comes to mind with works like Matilda and Charlie and the Chocolate Factory. I also really liked survival stories, such as Farley Mowat’s Lost In The Barrens. You’re correct that there wasn’t much diversity in literature when I was young. I tended to gravitate towards books that had any characters, such as To Kill A Mockingbird. However, I do feel it’s important to have marginalized communities tell their own stories, with their experiences front and center, versus playing a role in white stories.

VT:  You had the idea of Coconut Dreams as early as 2014 in Diaspora Dialogues. In the last five years between 2014 and now, what has changed in the final product?

DM: So much. (laughs) I’ve never had a chance to write it full time. It had always been whenever I had the time to work on the stories, I would. Back in 2014, I had an idea at least, a version of a draft, for each story. It was a long process that took many years, and really only came together in the last year.

I was lucky to work with my editor who had a strong sense of story. For each story, he made me look at the central tension. He made sure that the details of the story were linked to that tension, and served a purpose towards building that tension. Also, what evolved [in the last five years] were

the linkage between the stories, and the order and timelines for each story.

VT: You mentioned that writing from a child’s point of view, “everything seems to matter more for children” as well as “being challenged by vocabulary and scope of knowledge”. You’ve tackled many heavy and salient themes: racism, othering, bullying, childhood trauma – did writing from that point of view allow you to sidestep cynicism and disillusionment or was it a way to portray such themes in simple terms in order to communicate them to adults?

DM: I’ve been asked this question a couple of times. I didn’t necessarily set off to write those themes. I would let the characters guide the narrative, and these themes [would arise]. Growing up, the two [protagonists], experienced these themes within the course of their lives. I feel that’s the power of literature; the power of story. If you say to someone—let’s have a conversation about race, or here’s an essay about race, you would probably lose some of your audience. If you put that into a story, with a first person narrative, and from a child’s point of view—if you get them reading that “I” in their mind—readers are most likely to follow. And eventually, hopefully, empathize with the characters’ situation.

VT: Briefly in Hold it like a Butterfly and the whole Coconut Dreams, you wrote from the perspective of grown up versions of Ally and Aiden (respectively). Why didn’t you explore these characters in adult versions further as their adult perspectives were as interesting as when they were children?

DM: Coconut Dreams is primarily about Ally and Aiden’s childhood. I wrote those stories to show a transition to their adulthood and a glimpse at how their childhood might have affected them. I feel writing about them as adults in detail wouldn’t fit into this book. If I’d written five more stories as adults, it would be a different book. Maybe in the future I’ll explore Aiden and Ally’s adulthood in greater detail, but it’s funny, when writing you get so close to your characters that you need some time and space away to see them objectively.

VT: One thing that I noticed is that I really liked a lot of side characters. They come into [the protagonists’] lives, teach them some lessons, and then they leave. It’s so interesting and so intriguing. As a reader, I wonder what happened to them. What are they doing now?

DM: (guffaws) I don’t know if I can tell you really. I had to learn and experiment with this storytelling style. I hadn’t discovered very many linked short story collections when I was writing [the draft], and was looking for and reading as many as I could. Tales from Firozsha Baag and Barnacle Love, were two I found early that helped. Olive Kitteridge, I also found interesting structurally. Characters enter and exit and you don’t see them again, but I feel there’s this continuity, all of them making up the larger story. I tried to do something like that, to have at least [a member of the Pinto family] in all the stories. Even in Two Islands where it is the least direct [with regard to the Pinto family] when [Aiden and Ally’s mother] shows up and meets Thomas on the train, there’s a photo of Goa that he sends afterwards that really resonates with Ally and Aiden. It’s a bit of experimentation, and I hope it worked there and with the reader. At a certain point I feel you just have to trust the reader.

VT: The perspectives of Goa are shown in three different forms in three different lines — Felix (youth) (1940s), Thomas (20s) (1990s), and Aiden (late teens, early 20s) (2000s). What were you hoping to discover writing these moments at these time periods? In the process of writing them, was choosing the timelines intentional or did they change from the original time of writing?

DM: I don’t know if it was intentional when I first started, I was just tying these stories together. Looking back, I do hope it showed Goa from a few different angles. The first is the village life of Goans. It’s not something that’s well known. Goa is popular for its beaches and more of a tourist destination, but I feel like that is only one part of the story. I wanted to show the perspective of the people who live there.

The other angle I wanted to show was the tourist angle— how they see Goa. That’s where Thomas comes along, a tourist from the UK. And then the last perspective would be Aiden, whose heritage is from Goa, but he has lived his life elsewhere. He has a deep connection to Goa, but he’s experiencing it for the first time.

In terms of timing, I put the 1940s story first intentionally. It was important for the collection because it shows what Ally and Aiden didn’t have access to. They only knew Goa through stories. There’s a yearning for this place. I wanted to give the reader a primer, this is what they’re imagining, what they’re dreaming of in their childhood.

VT: I really liked The Elephant On The Mountain, how it starts a story that progressively became a dream.

DM: That one actually came from a writing exercise in a class by Michael Winter at the U of T School of Continuing Studies. He’d given us one example of a story-within-a-story, and the challenge was to write one ourselves. Mine started with a story of the siblings being left alone for the first time to babysit their baby brother. The second story was a bedtime story, or the legend of the Elephant in the Mountain, and then it ends by coming back to Ally and Aiden.

As our conversation ended, I learned that it will be Derek’s first time in Vancouver that is not from a connecting flight. Catch Derek at The Vancouver Writers Fest, The Fiction of Belonging, on Thursday, October 24th at 1:00pm to 2:30pm or at The Sunday Brunch on Sunday October 27th at 11:00am to 12:30pm. Both events will be at Performance Works in 1218 Cartwright Street in Granville Island, Vancouver. He will be reading from Coconut Dreams and sharing more of the magic of his short stories.

Vincent Ternida is a screenwriter, filmmaker and author. He was a finalist for Writer’s Guild Canada’s Diverse Screenwriters West and a second rounder for Austin Film Festival’s screenplay competition in 2013. Ternida’s first novel, The Seven Muses of Harry Salcedo, was published by Asian Canadian Writer’s Workshop. His short story Not All Bears Drink Mead will appear in Immersions: A Speculative Fiction Anthology, which will be released later this year.