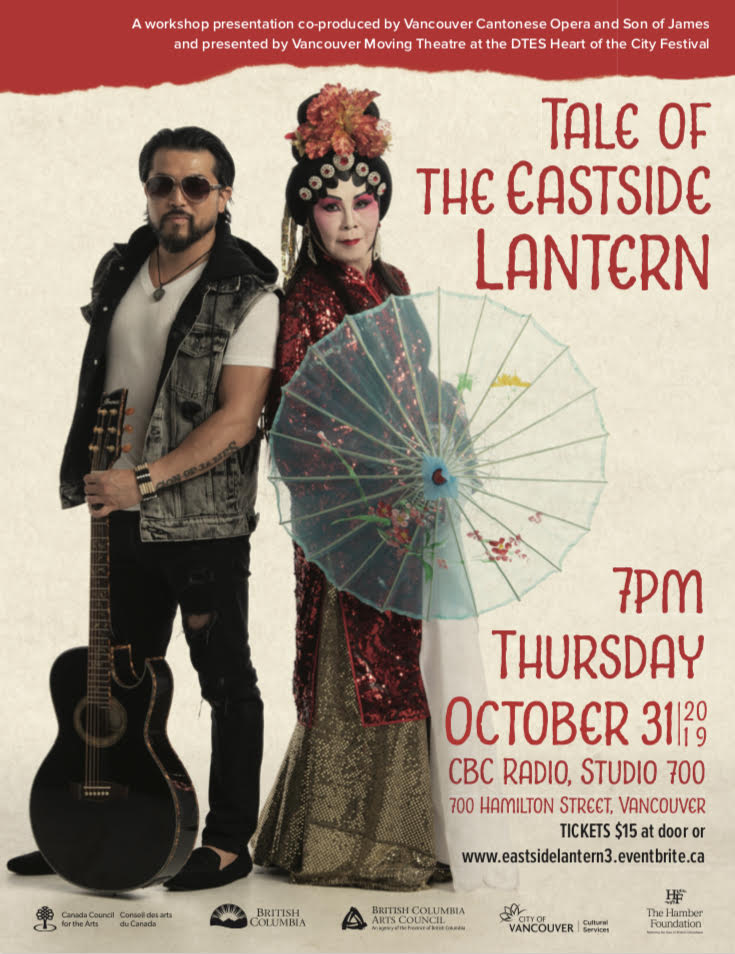 Son of James’ front man Shon Wong classifies their unique sound as “Chyna-Trucker-Funk”. “It blends the haunting sounds of Chinese instrumentation with the soulful sounds of Southern Rock and funk,” Shon describes.

At first glance, Shon Wong embodies a type of “bad ass” akin to muscle action stars and hard rockers in the ‘80s. His bomber jacket, aviators, and biker beard speaks volumes with the image he projects when I met Shon during his table read at Scripting Aloud.

Tale of The Eastside Lantern is a Rock Opera that combines urban romance, a whodunit mystery, with the tradition of Cantonese Opera and the grizzled melancholy delivered by Son of James. While there is a workshop presentation on October 31st at the CBC Studio for The Heart of the City Festival, we got a first look at the script in progress.

Vincent Ternida (VT): When did you come up with the idea?

Shon Wong (SW): I would say eight years ago, I was inspired by my grandfather. Being in a family of Chinese Opera Actors, I felt that as I got on with the years, I’ve always wanted to incorporate Chinese Opera in my work. Through that process, I participated in a couple of Chinese operas. I got first-hand knowledge of the makeup, how the staging works, I volunteered with the Vancouver Cantonese Opera.

I started learning how to do the makeup. I learned what their stories are about. I became an extra in one of their productions. That’s why I kept in contact with Rose Chang, the woman in the poster. So I always tell her, I got this great idea for a Chinese Rock Opera. We would always go back and forth, always keep in touch.

She’ll attest to this—Chinese Opera is dying. People like my grandfather are dying. They’re the only ones who appreciate it. That audience is dying, the art is dying. In a way, this is my way of paying homage to it. This is showcasing it, I want to give the audience a taste of Chinese Opera without having sit through a whole production.

VT: Despite it being a dying art form, I find it ambitious at the same time honorable taking your heritage. And what you said, you were the grandson of an opera family. With that heritage, you’re moving on, you’re adding on with your style as well. Nowadays, Rock is—

SW: Rock is dead! When’s the last time you heard a guitar on the radio? They’re who I grew up with— Guns and Roses, Def Lepard, Pink Floyd, Metallica, the usual suspects. You don’t get music like that anymore.

Who wants to listen to their new material? If I go see Guns and Roses, I don’t wanna hear all their new shit. Van Halen tried to do that and it sucked. I believe that bands only have so much music in you before you become a cliché. You have a sound that’s distinct, doesn’t matter what you do, any song right now is gonna be that sound.

VT: When you volunteered for the opera, did Chyna-Trucker-Funk came before or after?
SW: It probably came in the last year. We’ve been together as a band for two years, a lot of moving members. I’ve always had a solid four people: my horn player, chinese harp player, and bass player. The four of us, we’ve been the nucleus of it all. In the last year we’ve become better at it. We found our groove: A lot of our sound is really cool now.

VT: Are you gonna record the soundtrack to Eastside Lantern?

SW: For sure. A lot of songs from the East Side Lantern we’ve been playing for years. That’s what it was, we fit the story with the lyrics of the songs. It’s been a cool process—we really want to be a bad ass Chinese production.

VT: Did you have a deadline for this project?

SW: We had a deadline, knowing that Oct 31st is the presentation. So I set a monthly deadline for myself. God bless Savannah (Shon’s dramaturge from the Vancouver Moving Theatre). She’d give me feedback and ask me specific questions like “Why does this matter for this person? Why does the audience need to know that? Would the person from the Chinese Opera era talk like this?” We get into the headspace of these characters.

VT: As a first time writer, how did you find that challenge?

SW: In writing songs, I’m used to rewrites and editing. It was an easy transition. I’m used to putting things together, writing songs. If we have something and it doesn’t work, scrap it and start again. When Rick [Tae] gave me feedback, he really encouraged me to go deeper and get wider. One of his emails is writing is rewriting.

VT: How did that process go?
SW: When we had the script, I became confident enough to find a director. A couple of people’s names came up, Rick was one of them. And then Andy [Toth]. Rick had been recommended highly. Being Chinese, he’d be a perfect fit. I sent it to him first. He’s totally gonna say yes because at the time, I had the best script ever. (laughter)

He emails me back saying it’s cool, but I got a lot of questions for you, man. (laughter) He was kind enough to ask these questions to have the story make sense. In the first draft, a lot of my writing is expository. As a first time writer, I didn’t know what that meant. I looked it up and learned what expository meant.

It took another month to rewrite the script. I sent it back to Rick and he gave me glowing feedback. He said, “Shon, this is ten times better.” I asked him if he’s into doing [the production] and he said, “As a director, I’d love to do it as a finished product. But you’re on the right track, the changes you made are brilliant.” After he said no, I contacted Andy. Thankfully he read the new draft. (laughs)

VT: What was the timeline between drafts, from first draft (the one you sent to Rick) and the current draft?

SW: When I contacted Rick, it was a couple of months ago. I took a month for rewrites. And then the past month, I sent it to Andy who was doing the Fringe Festival. A week before Scripting Aloud, Andy and I met and agreed to the project. The universe came together at the right time.

[Scripting Aloud] was so helpful. Savannah and I, we thought it was okay but we still had our doubts about a lot of things. It was nice to hear that, all the jokes landed, people got the humor, and they got the comparisons and the undertones.

VT: How would this performance on Oct 31st go? Will it work like Scripting Aloud where you perform the play?

SW: It’s a workshop presentation, there’ll be movement, there’ll be a script at hand. I don’t have the full budget for a full production  yet. I like it that we’re taking baby steps, now we’re gonna put it on stage. It’ll be a bigger version of Scripting Aloud. We’ll have the audience give back feedback. It’d be nice to see what they like and don’t like. Did we catch your attention, did they care about the characters? I’m really enjoying the process.

As I was telling Andy, “Don’t be afraid to tell me what to do. I got no ego, my friend.” I told him straight up that I enjoy this. I enjoy the work. If you don’t like something, I will redo it. I showed him that this will be a good working relationship. I told him off the bat, I work for you. I need his expertise at this point, I’m only carrying [this project] as far as I can carry it. Now I need experts.

VT: What’s next for Son of James?

SW: Now that we’re hitting up our stride as a band, come the next week, I’ll be applying to musical festivals. Last July, we played the Vancouver Folk Fest. That was our first major music festival and Vancouver Folk Fest gave us a glowing recommendation to other festivals. The challenge is [navigating these festivals] as my members have day jobs. We’ll pick up some festivals here and there, like the Folk Fest and Vancouver Island. In today’s world everybody’s got day jobs and families. It’s not like we’re all eighteen and nineteen and nothing to do. We’re like late life rock stars.

We threw Roxy’s first Chinese New Year party. I think thats gotta be something to be proud of. In 30 years, they’ve never had a CNY party. They had a Chinese Elvis. We had line dancers and Chinese country music. People were enjoying themselves. Roxy wants to do it every year now. I don’t think there’s no space for the Chinese in this town.

We got nothing but love from people. We played the Roxy three times. There’s tons of room for us. We just gotta get over that we’re inferior. People want us to do our thing. If you got something cool and authentic and it’s coming from a sincere place: People feel that. I got nothing but a positive experience, and here to do my part; to show people what Vancouver really is about.

Catch Shon at the CBC Studio on October 31st for the workshop presentation of The Tale of the Eastside Lantern at 12pm.

Scripting Aloud meets every 3rd Monday of the month at Sun Wah Centre.

Vincent Ternida’s works have appeared on Ricepaper Magazine, Dark Helix Press, and was long listed for the CBC Short Fiction Prize. The Seven Muses of Harry Salcedo is Ternida’s first novella. He has a collection of short stories in development, adapting his novella into a screenplay, and interviews other writers for fun and profit. He lives in Vancouver, British Columbia.