Warigami, a CBC Gem Original Series show, follows Wendy Ohata (Emily Piggford) who discovers she has a twin brother named Vincent (Kai Bradbury) and that she’s a kami-jin – a descendent of an ancient Japanese people who can turn paper into deadly weapons. Throughout the series, there’s a kami-jin warrior named Sadako (Miho Suzuki) hunting her down for reasons she doesn’t understand. Created by Eddie Kim, directed by Jason Lapeyre, and written by Andrew Allen, Warigami began streaming on the CBC Gem in July 2019. Season One, consisting of ten episodes, can be watched for free here.

Ricepaper‘s JF Garrard caught up with Ms. Emily Piggford to ask her some questions about what it’s like to be on this awesome show, the future of Asian actors and her latest project. 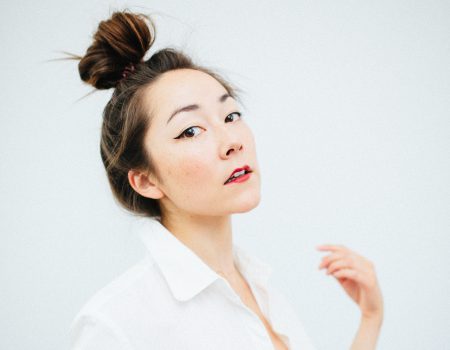 JF Garrard (JFG): When did you first hear about Warigami? What did you find intriguing about it?

Emily Piggford (EP): August 31, 2018! – that’s when I received the email requesting a self-tape audition. The first thing that hooked me was the description for my character, Wendy Ohata. She was adopted into a privileged family, had a long-lost brother (Vincent), was highly organized to the point of being type-A and struggled with the nuances of interpersonal relationships to the point of being overly-authoritative or accidentally rude. I was also very intrigued to see that whoever played her would need experience in stage combat, swordsmanship, and/or dance, and that they were specifically seeking Japanese actresses or mixed race with Japanese. On top of all that, to see that this commanding, slightly-quirky, kick-ass Asian character was not a supplementary role, but a co-star, I was like “What is this special show, and does “Warigami” mean we’ll be fighting with origami weapons!?” Yes it did. As I learned more about the world of Warigami, I also wondered if it was an adaptation of anything, perhaps a manga, or if it was inspired by any specific lore in Japanese culture. But our world of Warigami – with the super-paper-powered kami-jin and the Akuma – is an original concept from the mind of our creator, Eddie Kim! 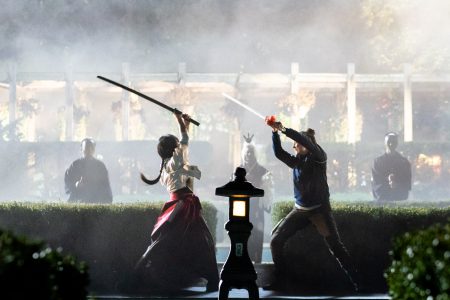 JFG: Was there a lot of physical training for Warigami? Considering in the first few episodes you were beating people up!

EP: I trained for Warigami over the relatively short period of two weeks leading up to rehearsals! I really loved studying taekwondo for the role and felt lucky to have had previous experience with dramatic combat and also dance to provide me with a solid sense of body awareness, some familiarity with lingo, and comfort learning/performing choreography. But huge thanks to my amazing doubles, Melanie Phan and Tsu-Ching Yu, for bringing their incredible skill to the floor and, together, helping make the warrior Wendy you see on screen. And big thanks to our stunt co-ordinator Master Chang for creating fights that served the story, the characters, the camera and the performers! Was so great to work with him and his stunt team and get to train at his taekwondo academy, Black Belt World. (Proud plug!)

JFG: Can you share what it was like to film this show? Were there any challenges that were memorable? 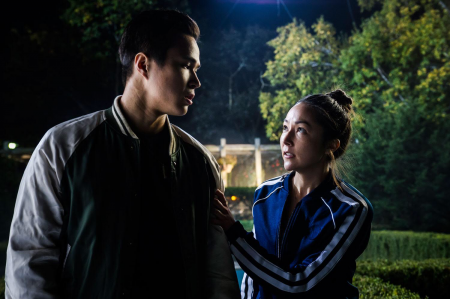 EP: While we were shooting, this visual came to mind of that moment in Spirited Away when Chihiro is inching down the staircase on the outside of the bathhouse, then a step breaks and she has to run, run, run, to keep from tripping till she makes it to the bottom. That scene gives you a shock and a hit of adrenaline, is a bit surreal, but also somehow relatable and also funny. That’s how I felt filming the show, haha! – exhilarated and focused on keeping up the pace!

Challenges I enjoyed ranged from performing the fight choreography, to three full night-shoots in a row, to occasionally switching the shooting order of scenes on the day (adding a scene or pushing a scene to be completed another day, sometimes shooting inserts a week or two later). One specific challenging moment that comes to mind, though, was a little scene we shot for a montage where Wendy and Vincent (Kai Bradbury) are practicing throwing paper blades. Wendy hits the target every time and Vincent misses. We rehearsed, had our parts down, then went for a take and kept doing the opposite!– I’d miss or hit the target, but not get the blade stuck, and Kai kept sticking them every time. I went through this whole internal journey that was actually quite informative. The first couple misses I thought, “Just a fluke, don’t be nervous, focus, settles, serious, Wendy…” Kept missing. Then low-level panic crept in worrying about wasting time or looking bad. I realized how paralyzing that worry was because instead of stopping and adjusting, I just kept doing exactly the same thing, almost incredulously, like “Why isn’t this working? I could do it before. Maybe if I just keep repeating this something will click.” Then I realized, it had gone so well in rehearsals because I was focused on learning, improving and getting the darts in, which meant that if I missed, I’d organically adjust before throwing the next one. But in performance– panicking about wasting time or looking bad– I realized I wasn’t giving myself the time to adjust, I was just pushing through and getting the same unsatisfying result. It was basically the epitome of “beating your head against a brick wall.” I also realized that once we started filming the throws, I started thinking about getting the darts in as Wendy, adding this extra layer of “performing throwing darts” rather than just throwing them. This whole thought process happened in a very short amount of time that felt like forever. After realizing all of this, I breathed, dropped any facade, and let myself adjust. Turned out, it was a simple matter of re-positioning my feet by about 1 inch. Tell me that’s not some kinda metaphor for life!!

JFG: Have you heard of any reactions from the Japanese or Asian community about this show?

EP: I’m excited to, but haven’t yet! – beyond watching it with my friends, some of whom are Asian, or hearing back from my family, some of whom are Japanese. Not to discredit their positive opinions by the somewhat inherent bias of being my loved ones haha, but yes I look forward to hearing more reactions to Warigami, particularly from our Asian viewers, particularly those of Japanese descent. (For anyone who hasn’t seen it yet, it’s available to stream online for free in both the US on CW Seed and Canada on CBC Gem! You can watch the whole thing in under 2 hours!) (JFG note – Link here!)

JFG:  It is a pleasant surprise for myself to see Asian characters not needing to speak in accents. Do you see this becoming more of a norm as more diverse projects hit the screen (movies, television, etc)?

EP: I definitely think it will be increasingly common to see Asian actors in an increasing range of roles. I’m so excited to already see that happening in the past few years. The more shows there are that specifically feature Asian stories, the more opportunities there are to see the richness of those lived experiences– accents and native tongues included– in a way that doesn’t feel like tokenism or stereotype, but authenticity. And I am also, yes, very excited for there to be more Asian characters that do not speak with Asian accents to reflect those very real experiences, like my own – being mixed-race and raised in an English-speaking part of Canada to parents whose first language is English. I’m also, also excited to see an increase in Asian actors playing characters where the ethnic background of the character is not paramount to or maybe even included in the action of the story. There are so many ways to represent and feel represented, so many ways to be proud of being of Asian descent. Let’s continue exploring them all!

JFG: What have you done in your past training and projects which helped with work in Warigami? 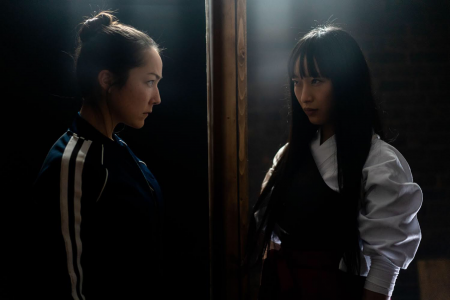 EP: Portraying Wendy’s rather professional composure and deadpan delivery was a fun and comfortable place for me, especially having first gotten to play in those waters as “Sandra” in season two of The Girlfriend Experience (Starz, Showcase) and “Beth” in Michael: Every Day (CBC). Studying stage combat with the Academy of Dramatic Combat (hand-to-hand, sword, rapier-dagger) and the years of dance (highland, hip hop, ballet, jazz, contemporary) was very helpful. Yoga helped with flexibility and mindfulness. I also felt grateful for my acting training in general from studying at the University of Victoria and the Canadian Film Centre, especially where it concerns rehearsals and prep, breaking down script and character. In terms of being on set every day in a lead role, I felt prepared for that from the range of experiences acting on screen in the years leading up to Warigami, from being a supporting character on larger productions like Hemlock Grove and The Umbrella Academy for Netflix, to being the lead in short films and another digital series, That’s My DJ. Warigami was my first experience as a lead in a larger-scale production, being called to work every day of the three-week shoot. Feeling ready for that was really a cumulative effect of all that came before, which I suppose makes sense, but from the inside seemed to emerge quite serendipitously, all in its right time.

JFG: What new projects are you working on next?

EP: I’m currently in New Zealand shooting a thriller mini-series called The Sounds, starring Rachelle Lefevre, Matt Whelan, Matt Nable and I, along with a whole host of really talented actors, directed by Peter Stebbings and written by Sarah-Kate Lynch. It’ll be available to watch in Canada on CBC, Sky TV in New Zealand, Acorn TV has rights in the U.S. and U.K. and secondary rights in Australia, and All3Media’s distribution team will be selling it through the rest of the world, so keep your eyes peeled 2020 for this twisty tale with rich characters set against the most beautiful backdrops!

JFG: Thank you Emily for your time! Again, click here to watch Warigami on CBC Gems. It will make you want to fold origami ninja stars again!