There is a quality about Alan Yang’s film that lingers throughout most of the film, Tigertail, a realistic time-skipping film written and directed by Alan Yang.  Where there often is a slow-building tension and the viewer is expecting an explosive payoff of drama, one question throughout the viewing experience is when exactly does this explosive payoff come?  I find out only out after watching the film with some passage of time.

Tigertail tells the story of a man named Pin-Jui (played by Tzi Ma) who is living in present-day America and often reminisces about being raised within the village Huwei (aka Tigertail) in Taiwan. Reveries of Pin-Jui’s memories with hardship growing up with his mother (played by Yang Kuei-Mei) working in a factory together, resulting in some laughter and joy extending all the way until Pin-Jui becomes a young man (played by Hong-Chi Lee – delivering a very charming and commendable performance).  Soon after, Pin-Jui is compelled to make life-altering choices leaving behind his mother, his motherland, and his yearning to immigrate to America. The resulting inner conflict is what drives the bulk of the story in the present.

The portions of the story based in Huwei are shot and filmed with an enthusiastic appeal even during some intense moments; golden yellows, vivid reds, rich greens, and deep blues. The youthful exuberant love of Pin-Jui’s life in Taiwan with Yuan (played by Yo-Hsing Fang – who is a sizzling and complex character) and when meeting his boss’s daughter Zhenzhen (played by Kunjue Li) is dream-like even during quieter moments with unspoken conflicts.  Contrastingly, the scenes with Pin-Jui once newly married arriving in America in the 1970s the dream-like sheen of the film’s photography begins to fade and resemble regular everyday life, lasting until the end of the film.

In its current setting, while Pin-Jui is distant with both his wife (played by Fiona Fu) and American-born daughter Angela (played by Christine Ko, with such beauty and vulnerable believability), Angela is also going through her own trials and tribulations and is looking toward Pin-Jui for guidance and emotional support. Due to memories of Taiwan and life after marriage adjusting to America in the 1970s, Pin-Jui in the present just does not know how to provide the emotional support Angela needs, resulting in the further fractured framework of his present. 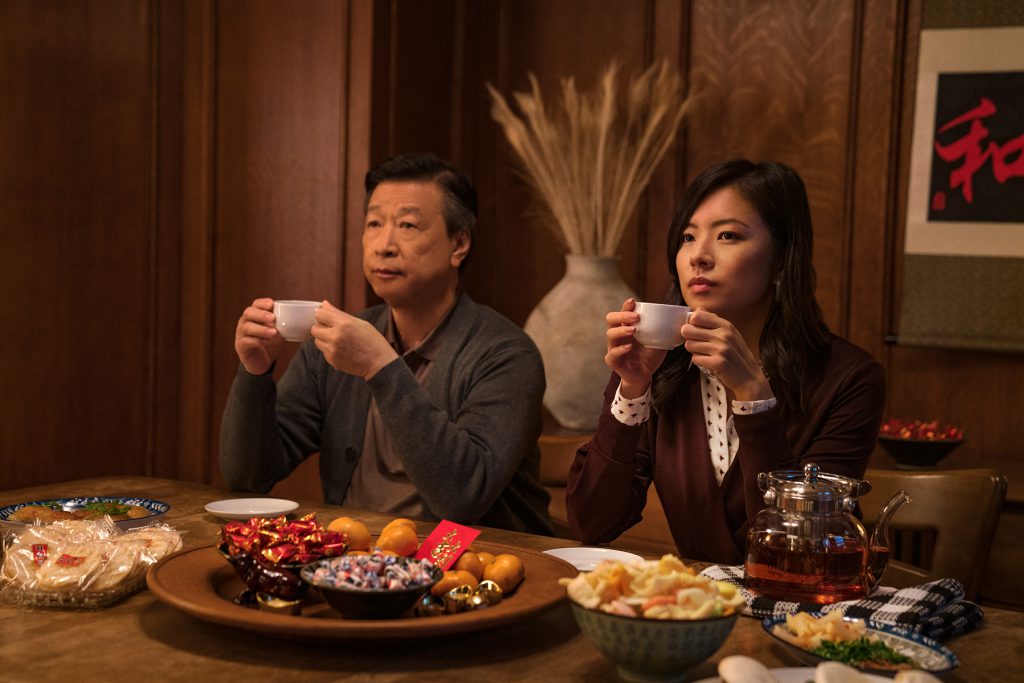 While Tigertail can be considered quite a departure from Alan Yang’s Master of None television series (co-created and starring Aziz Ansari) the film does have quite a few well-delivered scenes. Other than all of the remarkable supporting performances, three elements largely highlight unique parts of the film:

Surprisingly, Tigertail rarely goes beyond the expectations that the viewer eagerly awaits after watching the great trailer, as the majority of the film’s core is contained within it. Despite the film’s brisk length, Tigertail is one of those rare films which needs to be longer and expand on its dramatic scenes; too much time was given to the “adjusting” to life after Pin-Jui’s arrival in America and too little time was given to an important character (elegantly played by Joan Chen) which Pin-Jui only reconnects within his older years, which is a pity.

As the film is not much of a departure when compared to other indie films featuring Asian-Americans dealing with the acculturation aspect of immigration; to name just three such examples – The Namesake (2006), In Between Days (also 2006) and Gook (2017).

Therefore, instead of labeling Tigertail as an Asian-American story, it should be viewed as actually an Asian story about a Taiwanese man who raised a family, adjusted to America but rarely tastes the fruits of happiness associated with the ‘American Dream’.  Yet, this is not saying Tigertail is a bad film when in fact it is a good, well-made one — but just not one achieving levels of cinematic greatness.   Nonetheless, Tigertail is definitely worthy of watching as Alan Yang has managed to produce a decent film, which afterward viewers can expect even greater work in the future.

Abhishek Sharma is in the field of Career Counseling and Life Coaching and is employed at the Progressive Intercultural Community Services (PICS) Society. He volunteers with the Richmond Multicultural Community Services and the Vancouver Asian Film Festival (VAFF). In his community work, Abhishek manages volunteers, works with individuals from all types of backgrounds, facilitates career development workshops in employment centres as well as leads customer service experience initiatives. An avid reader and pop-cultural enthusiast, Abhishek is a freelance writer and is a frequent contributor to Ricepaper magazine.