The Art of Illusion: An Interview with Shin Lim10 min read 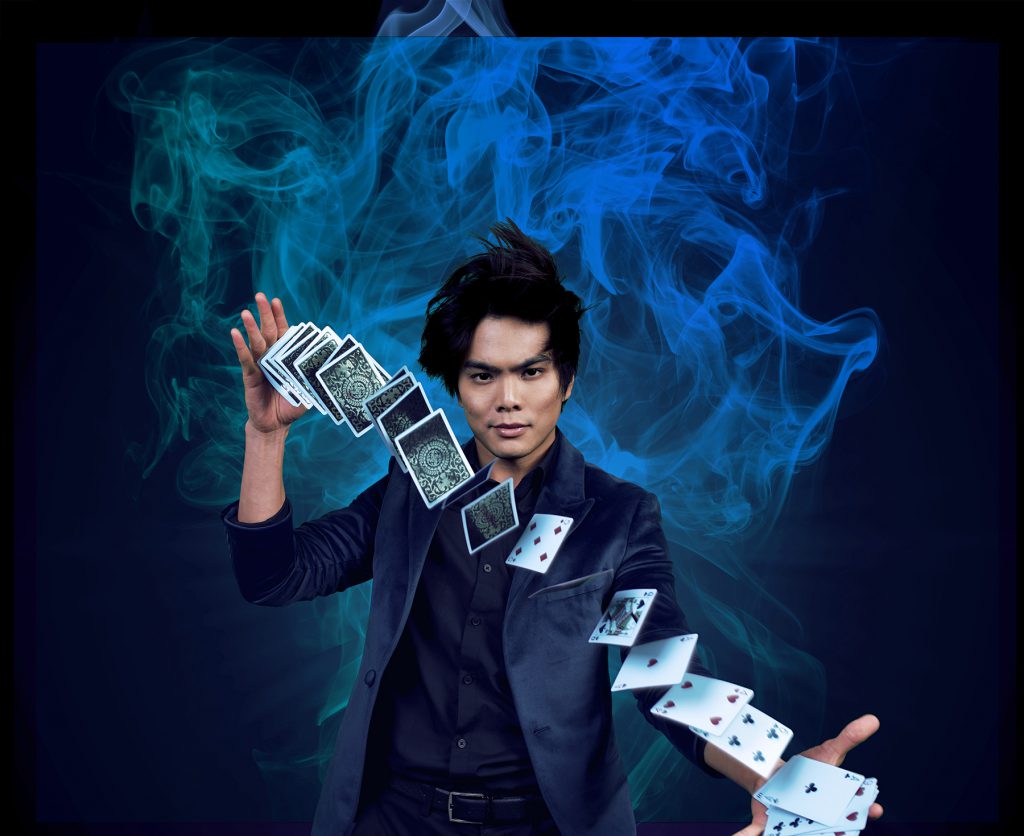 Born in Vancouver with parents from Singapore, Shin Lim is a Canadian-American sleight of hand artist, who won the 2015 Fédération Internationale des Sociétés Magiques (FISM) in close-up card magic. Known for his silent routines set to music, Shin dazzled audiences at Penn & Teller: Fool Us and proceeded to win both 13th season of America’s Got Talent and America’s Got Talent: The Champions.

Woojin Lim (WL): To start off the interview, why magic? What drew you to a career as a magician, and why is it so meaningful for you?

Shin Lim (SL): I like performing in general. I started out as a classical pianist before I did magic. I played piano since I was nine, and planned to play it for the rest of my life. Then, I got carpal tunnel syndrome in university. I was pretty much given an ultimatum from the doctor to pick one of either piano or magic because both take a lot of strain on the wrist.

So I decided to take a break from music for a while and do magic. It was a natural type of transition. I had always liked magic but I wouldn’t say that I picked it specifically for a career choice. I wasn’t like “oh yeah, I’m gonna be a magician” ever since I was five years old. It just happened accidentally, on the cuff.

I loved performing and creating, and I still do. Because of that, I kept going.

WL: You’re well-known for your sleight of hand and close-up magic. How did you get into that?

Shin Lim (SL): Because it’s cheap. All you need for sleight of hand is a deck of cards, or some coins if you do coin magic. Bigger names like David Copperfield or Lance Burton use big props with big boxes but all that stuff costs a lot of money. It can cost up to hundreds of thousands of dollars for just one prop.

Obviously, as a college kid, I couldn’t afford that. But I also found sleight of hand to be more fascinating as well — using just your hands to accomplish things that seem impossible, rather than buying a box. 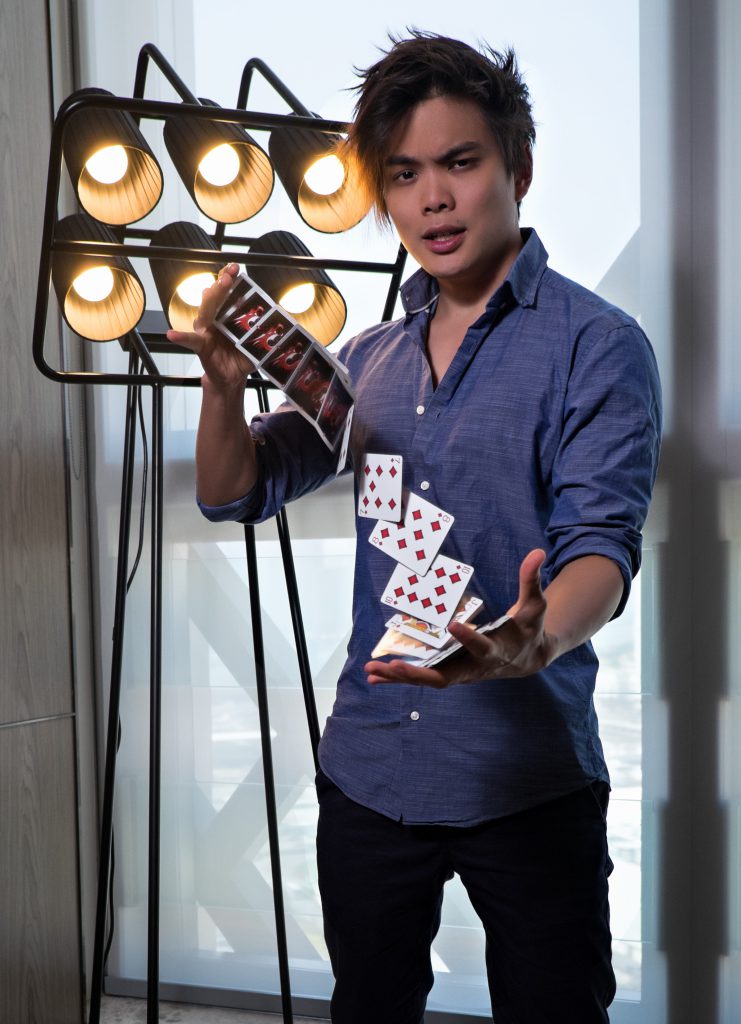 WL: What’s been your favorite routine to perform?

It’s something I call the “The Dream Act.” I first created it when I was in college. It’s an act that involves two volunteers who sign each card that they select. The cards eventually start to teleport from place to place, the two cards meet, and they switch places.

It’s also one of the easiest acts for me to perform in terms of sleight of hand because surprisingly, the routine has a lot to do with human psychology. There are other acts that are cool, but some acts might be challenging to perform, sleight of hand wise. But I’m comfortable with “The Dream Act,” and I can do it in any situation because I’ve done it for so long.

WL: Could you tell me more about your creative process and how you self-choreograph all of your routines?

I don’t really have a set creative method because, for me, creativity is very open. It’s a very wishy-washy type of thing, and so is my entire life.

But I have some set goals in my head that guide my thoughts when I want to perform a routine. I start off with the featured theme and methods, for instance, teleportation, changing colors, or vanishing coin. Then I need to find a song that I want to use, and this tends to be the hardest part. There’s a difference between a song that you like versus a song that works for the act.

It’s tough when you’re trying to satisfy both desiderata, especially when I’ll only use songs that I like and love. If I don’t love it, I’m not going to use it. Sometimes it takes me up to seven months to find a song, but I eventually find one. Once I have the song and the list of themes and tricks, I then connect them with that song in my head.

When it comes to the physical aspects of magic, I start by building everything — maybe there’s an envelope here, a sharpie there, a vest to wear, or a plastic bag to involve. There’s always miscellaneous props here and there that I need to figure out how they go in and out of the routine.

I try it out with the music, and then I start tweaking the acting bit by bit, performing it again and again. It’s a back and forth type of thing. This process is actually the most fun for me because that’s when I get the most creative. I would say that a lot of the stuff I do is based on classical tricks from magicians from all the way back. But when I’m editing and moving parts around while creating the music and magic, the magic seems to change because of that, and it’s those moments when I become the most original.

WL: How would you describe yourself as a magician?

I actually don’t call myself a magician when I perform. When I go up on stage, I provide a disclaimer, “everything you’re going to see is sleight of hand, not magic.” Either I can be seen as honest or ruining it for everyone else. But I pretty much say that there’s no magic. Magic doesn’t exist. I guess I don’t call myself a traditional “Magic Man.”

I like to compare magicians to classical pianists. When you hear someone play something extraordinary on the piano, sometimes it sounds like magic. You’re like, “wow, I have no idea how you’re doing that right now. Your fingers are moving a billion miles a second.” Okay, maybe not that fast. But it’s pretty magical.

Magic, all it is, is piano-playing. It’s the exact same thing. The main difference, though, is that in magic, you’re hiding all of your skills. With the piano, you’re not hiding in the shadows, but you’re showing off, right? You can see the fingers move and you hear the music. But with magic, you’re hiding your fingers. You keep asking yourself — how do I go about hiding from the viewer my dexterity through misdirection or sleight of hand?

Even though it’s really tough, magicians still have to hide their skills in order to fool the audience. What I do is pretty much that. So I wouldn’t say I’m a wizard as many other magicians might claim.

WL: What do you want for your audience to walk away with after watching your shows?

I try to make the show inspirational and I want people to be inspired. Beyond magic, I also talk about my injuries, my carpal tunnel, and cuts on my hand. I tell them exactly what happened during those accidents and the healing processes which took a long time. I talk about how it was a really daunting and depressing time, with my job hanging by a thread.

Usually when people kind of walk away from my show, the last impression they get is a feeling of being able to accomplish things despite the very bad things that might happen to your life due to circumstances that you can’t really control. The message I want to send is that even when the hardships strike, it’s not the end of the world. You can push through and persevere. 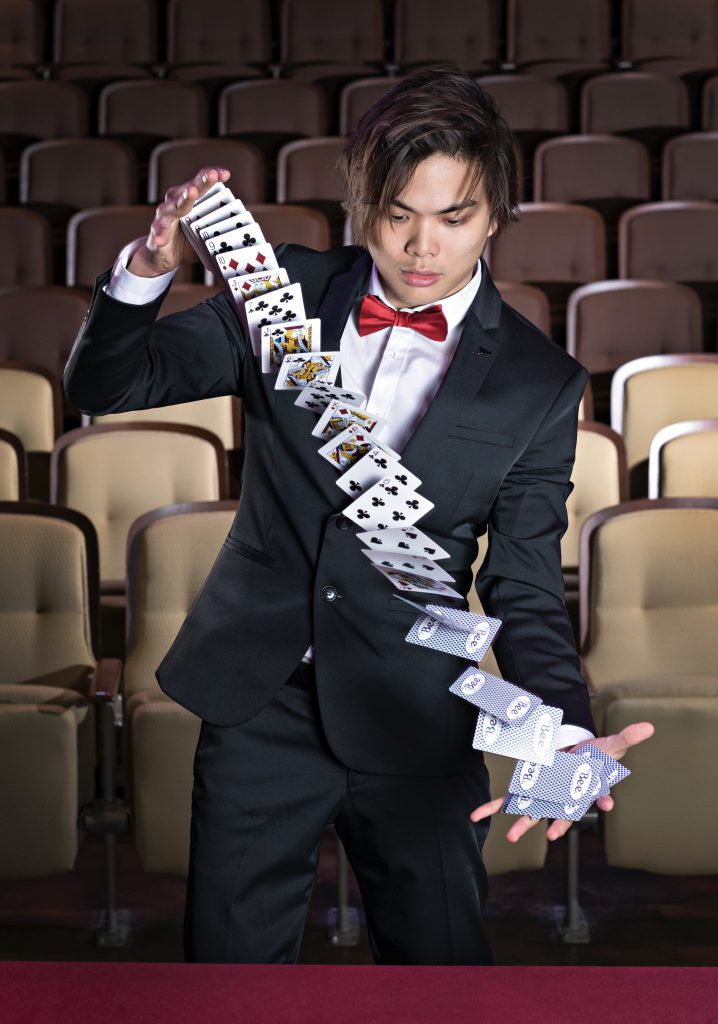 WL: What have been some high points and low points during your career?

The highs are definitely like winning America’s Got Talent and FISM, which is basically the Olympics of magic. Penn and Teller were also really fun.

The lows I would have to say is the business aspect of the industry. People cheating you and stuff like that. That’s the bad side. But you have that with any kind of business, not just with entertainment. I think the entertainment industry though is for sure more deceiving because it seems all very bright and colorful from the very front of everything. That’s why people get attracted to entertainment because it seems so fascinating and so good. But it’s just the same, like any other industry, you’ve got bad people trying to take things from you. It’s just what it is.

WL: Could you tell me more about your Asian background and what that means for you?

My parents are Singaporean. Even though I was born in Vancouver, our family moved back to Singapore when I was like six or something. My mom homeschooled me but I didn’t choose to learn much because I was daydreaming the whole time. Then my dad got a new job and we moved to Boston. That’s my early childhood pretty much.

I love Singapore, and especially food there. I’ve been trying to cook authentic Hainanese chicken rice, which is the staple food in Singapore. I’d say my stomach is Singaporean, though my way of thinking has been warped by Western culture.

Of course, I’ve always respected and been honored to represent the Asian community. I wish there were more Asians in the arts, though Asians, in general, have accomplished tons. I hope we continue to do that.

WL: Do you have any advice for aspiring magicians?

Just be yourself. It’s a very cliche statement, but it’s so true.

Trying to be myself in the whole industry was, I consider it, a success. A lot of times when people try to do any sort of artform, they pretend to not be themselves, and they try to be someone else. I see a lot of magicians have a fake persona. In the entertainment industry especially, it’s really tough to be yourself. For any artist that wants to be well-known, the hardest thing is to be true to yourself — believing that you being yourself will get you there rather than needing to take a shortcut of sorts.

When you keep going up and up, a lot of people will tell you that you need to change or that you need to use this or try this, doing this or acting like this. It might help with the views or whatever. But then you realize that if you end up doing that and you don’t like it, then it can be detrimental to your career in the long run and to your mental health. You got to just really be yourself and listen to your gut as well.

I’m focusing on creating new content and making new stuff for my show. I’m also doing a revamp of my show in Vegas, so I’m really excited about that. It’s going slow, and I’ve been pretty much on holiday mode, but that’s the goal. Once all this is over, we’re going to make a grand reopening because the theater is going to be changed completely.

Woojin Lim is a Korean-Canadian journalist studying philosophy at Harvard University. He is the film reviewer for Vancouver Weekly, columnist for The Harvard Crimson, and managing editor of The Harvard Review of Philosophy. His poems have been published in Elastic Magazine, and he won the John Felstiner Poetry Prize in 2018. Follow him on Twitter @lim_woojin