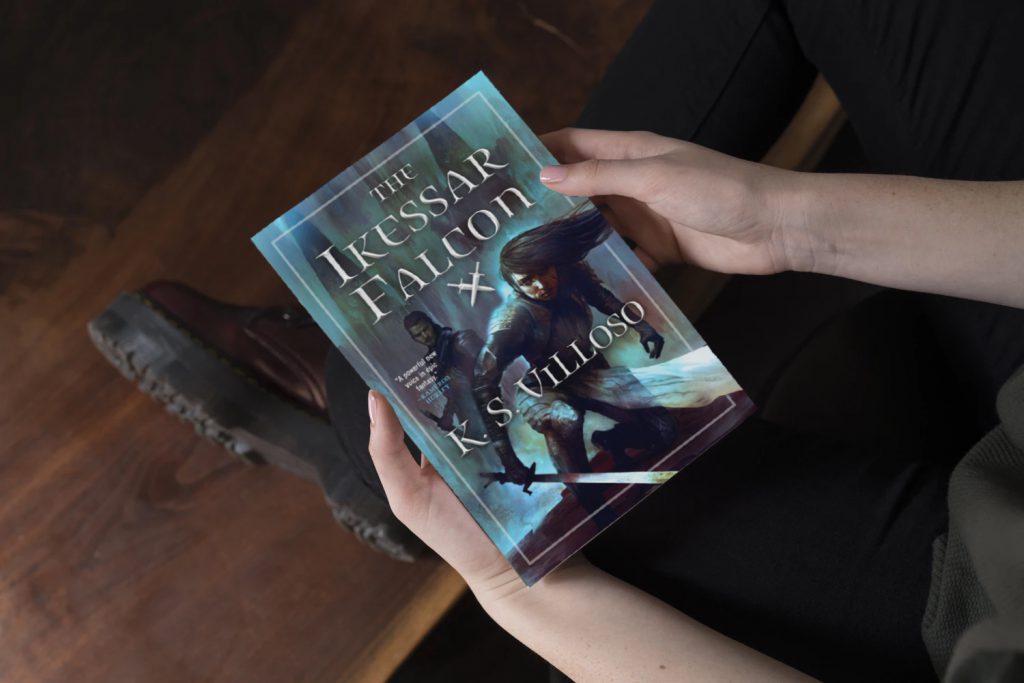 The Ikessar Falcon by Filipino-Canadian K.S. Villoso is coming out on September 22, 2020. It is the sequel to the Wolf of Oren-yaro, which is Villoso’s debut epic fantasy novel. In order to save her land, Queen Talyien must confront the myth others have built around her: Warlord Yeshin’s daughter, symbol of peace, warrior and queen, and everything she could never be. The price of failure is steep. Her friends are few. And a nation carved by a murderer can only be destined for war. We talked to K.S. Villoso about her upcoming book!

ND: What was your process of world building using Philippine culture or reimagining it in your series?

I took a lot of inspiration from the fact that the Philippines is not a monolith. It is an archipelago, a nation of many different people who look different and have very different struggles, histories, religions, customs, and languages. It is difficult to do a body of work and claim “Filipino identity” when there is such variety and it is all too easy to give in to the dominant culture (Tagalog, for example) and rendering everyone else invisible. For instance, I identify as Bicolano first—both my mother and father are Bicolanos, I was born there, I still speak the language. There was always a lot of “Filipino culture” (food, practices, even customs) I couldn’t readily identify with (which became really obvious when I first met my Tagalog husband). I do not get excited about lumpia. I enjoy it, but we didn’t really cook it in my family…we ate sinapot and pancit bato and ibos instead.

So, I didn’t set out to use Filipino culture consciously—at least, not by picking certain characteristics or myths to use in the world. Rather, it is Filipino at its core. I center Filipino experiences and the Filipino worldview (to the limit that I’ve experienced them, or know about them through my friends), and grew the world from there.

My world building is an evolving process, and many of the different nations in Agos-agan, the world where this book is set, was built so I can explore certain aspects or issues within Filipino culture. It’s made a world that in my mind, is about as fantasy as it gets: feuding states headed by warlords, rich empires built off the backs of the colonized, ancient magic lying dormant underneath the turmoil—but leaves a lot of room for discussion and exploration of relevant topics. It’s my way of redefining the narrative as a Filipino—by creating a world that acknowledges our hardships but still sees us as heroes in one way or another.

ND: You’re very engaged online and support the author community around you. Can you tell us how you built an audience in a digital landscape as an author?

I didn’t really set out to build a platform from scratch—a lot of my online interactions stemmed from the writing group I’ve been with since the mid 2000s, which is the same group that helped me with my indie publishing endeavours. Because of our involvement with various other online communities, it just kind of grew from there—we made a lot of genuine connections and found some good friends along the way. I know many of these guys for years and am honoured to continue to be in this community with them; it’s amazing how much less lonely this career is when you share it with like-minded people.

Be authentic and kind, and actually care about others. Consider the space you’re in—this space we share with other authors, reviewers, readers, and publishing professionals, and act in a way that is considerate of them and their goals. It doesn’t hurt to remember people’s names, to respect their pronouns and other requests (especially their space: don’t go barging into a reviewer’s blog to leave comments on how wrong they are!), and to listen to the things they care about.

We can also use our platforms to help (especially those who are in a similar situation), or use our influences to put light on topics that are important to us or boost other voices. The writing world is competitive, and there are a lot of egos and conceit going around. But this isn’t Highlander…the “there can be only one” mentality is harmful. Especially for us in marginalized spaces, I think it is crucial we start thinking about the changes we can make as a community, how much better it will be for those coming behind us if we work together for the greater good, how much more powerful our voices are together. Maybe it’s the Filipino in me talking, but I feel like the bayanihan spirit can really take us far.

ND: Do you feel like how people related to Talyien in your first book influenced your writing in The Ikessar Falcon? What is a common connection people tell you they have with her?

I wrote The Ikessar Falcon immediately after I wrote The Wolf of Oren-yaro, and before the latter was read by anyone. So I went into The Ikessar Falcon without knowing exactly how people were going to react to Talyien from Book One. She has her own journey, one which she undertakes (because Book Three is finished) without input from anyone—not readers or even an editorial team. Even I didn’t get to have a say on her fate in the end—she makes that decision solely because of how the character was formed from the beginning.

It’s interesting to see how people reacted to Talyien. Not everyone could relate to her—in fact, many people downright hated her. But as many people, especially women, loved her just as fiercely. Having a well-rounded, opinionated, realistic woman character could do that, I think. She’s her own person. She has her faults, she has her hang-ups, and while most of my characters are “stubborn” in one way or another (probably because I am, too), Talyien is at the top of the list. But then, why shouldn’t she be? As Queen, as the daughter of the most hated man in the land, she has a lot to live up to, a lot to prove, and the intricacies of her position makes it so that every mistake she makes is magnified. She has little room to breathe (writing from her perspective was often very claustrophobic and left me exhausted), and her responsibilities seem to make it all but impossible for her to be happy.

That exhaustion—that feeling of having to wear an armour every time you face an unforgiving world—is probably one of the things that unite those who love Talyien.

ND: Is there a detail or theme in the The Ikessar Falcon you want people to notice?

Talyien as a wife, Talyien as a mother, and then Talyien as a daughter—these three respectively form the backbone of each book in the series. Each form a facet of her character, and the themes of resilience and strength are contrasted against each of this in every book. In The Ikessar Falcon, Talyien closely examines her relationship with her son and how her own mistakes and downfall, so to speak, might have also doomed him. It shows the struggles of a mother as she realizes her child may not be all that safe anymore and that she did this to him. “A mother’s sacrifice” may be the resounding theme.

ND: When did you start writing The Wolf of Oren-yaro? What was life like when you had the inspiration to write these books?

I outlined the whole trilogy in December 2016, wrote The Wolf of Oren-yaro in January 2017, and finished it three months later, in March. But I’ve had the idea for months before that—years, really.

By the time I was ready to actually draft the whole story down, I’ve been sitting with the characters for a while and I knew exactly who Talyien was, her challenges, and the themes I wanted to explore. It made the process relatively straightforward, if not “easy.” Also by then, I’d been laid off and was no longer working a day job, so I was able to write all three books in about a year and a half.

ND: Is there any reason why you chose to use initials for your name? I can’t help but think of women who had to use initials or a different name because of bias towards female names in publishing. Correct me if I’m wrong!

That certainly played a part in my decision. I write with one foot firmly in epic fantasy territory, and a good bulk of the audience it served in the past may have a bias against female names (perhaps that is changing with these times, but I couldn’t take the risk—it’s difficult enough navigating these spaces as an author of colour).

The Ikessar Falcon is coming out on September 22, 2020 and you can pre-order the book here.