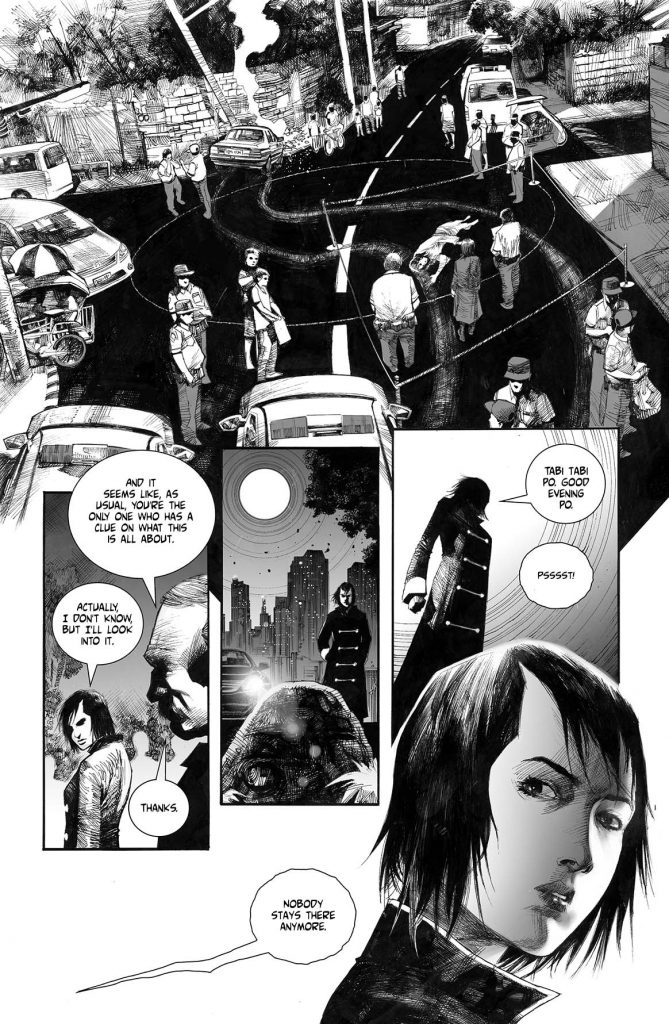 Trese Vol 1: Murder on Balete Drive by Budjette Tan and Kajo Baldisimo is coming to US and Canada on October 13, 2020. This award-winning Filipino comic book is currently in production to release as an anime on Netflix.

When the sun sets in the city of Manila, don’t you dare make a wrong turn and end up in that dimly-lit side of the metro, where blood-sucking aswang run the most-wanted kidnapping rings, where gigantic kapre are the kingpins of crime, and magical engkantos slip through the cracks and steal your most precious possessions. When crime takes a turn for the weird, the police call Alexandra Trese.

We talked to Budjette Tan and Kajo Baldisimo about TRESE, the aswang and Filipino mythology.

ND: What sparked the idea for your incorruptible hero, Alexandra Trese?

BT: I’m a big fan of detective stories and police procedurals. I started TRESE wanted to tell my own Batman, Hellblazer, X-Files, and CSI stories. I wanted to tell stories about Philippine myth and folkore, but through the lens of a detective story. The first drafts of TRESE had “Anton Trese” and he ended being your typical tough guy detective. Something about those drafts didn’t feel right. They just felt typical, expected, the usual.

Kajo had already sent me a sketch and a sample page of Anton Trese fighting an aswang. Something just clicked and I thought, what haven’t we seen before – in Philippine pop culture and in Western detective stories? We rarely see a female lead in these stories. So, I texted Kajo and said, “What if Trese was a woman?” And he replied, “That would make her more cool! She would be so bad ass!” He emailed me a new sketch of Trese – who became Alexandra Trese. One look at that sketch and I knew she was going to be the hero of our story.

Looking back, I think that spark also came about because of characters like Major Motoko Kusanagi from Ghost in the Shell, Darna, Jenny Sparks from The Authority, and Miranda Zero of Global Frequency.

ND: In your day to day life, how do your friends, family or colleagues talk about the aswang? What story or belief stuck with you?

BT: When I was kid and I didn’t want to go to sleep yet, my dad would tell me that there was an aswang outside the window and it would come and get me if I jumped off the bed. My dad would say that I needed to protect him from the aswang.

My mom would often tell the story of how we used to live in a haunted house and how the ghost possessed me when I was six months old. Supposedly, the spirit entered my body and half my face wrinkled up to look like an old man. My mother freaked out and slapped me, but I didn’t cry. She started to pray over me and after awhile, my face returned to normal and that’s when I began to cry.

A séance was held in the house and the medium was the one who learned about the old man who used to live in that house and still thought he owned it.

I grew up with these stories of ghosts in the house and aswang outside the house – eventually, they all ended up becoming part of the TRESE stories.

ND: Budjette, you mentioned how The Soul Book by Gilda Cordero-Fernando was a big inspiration to you growing up. Can you tell us about this book and any other books that inspired you?

BT: We had a mini-library in the house when I was a kid. The Soul Book was lying around on the shelves. We didn’t have internet back then and only five TV channels. The Soul Book became a guide for me to learn more about myths and folk beliefs. And since I was also into Dungeons and Dragons at that time, I was amazed to learn that we have more awesome gods compared to the Greeks and Egyptians! The Talagbusao, who is one of Trese’s main adversaries, is a god of war and I learned about him from The Soul Book.

Later on, I got to read some of the Maximo Ramos books and eventually got hold of U.P. Press’ books about our Myths and Legends. 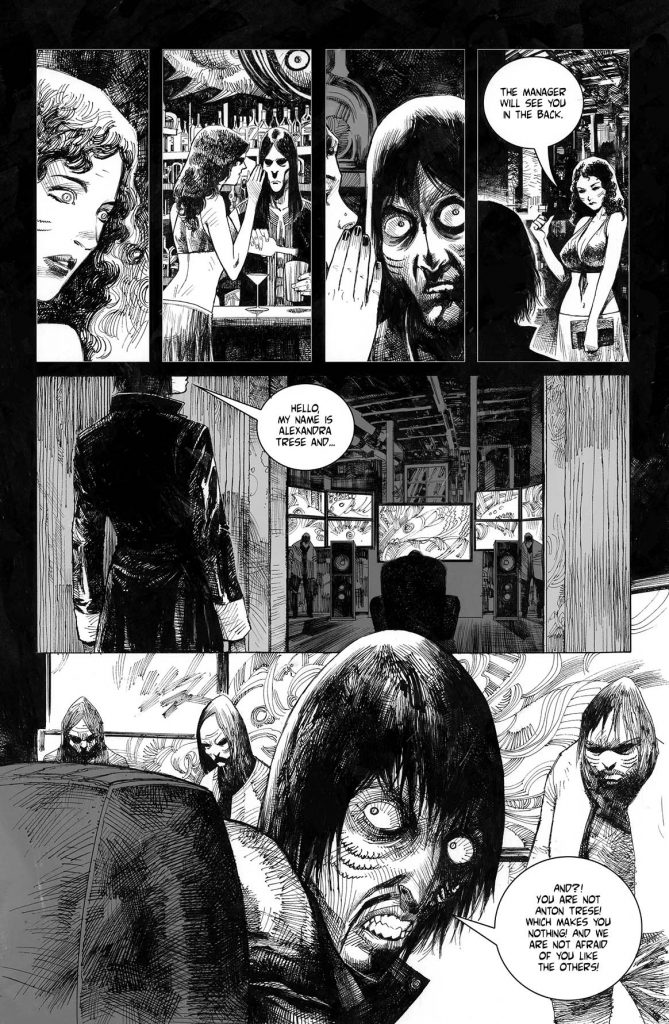 ND: What is integral to you or motivates you to tell the story of TRESE?

BT: Before TRESE, I had self-published and co-published a couple of comic books which didn’t sell well. When I got into advertising, I hadn’t written any new comic book story for a couple of years and I didn’t want to lose any more money on a comic book that might not sell.

When Kajo invited me to make a monthly comic book with him, I thought, “Okay, let’s do this for fun! No expectations.” That’s been what’s been guiding us all these years. We get to make a comic book about all the aswang that we heard about when we were kids. We finally find the answers to the mysteries behind those stories and put some kind of closure on them.

KB: The most integral part of working on TRESE is being able to entertain the reader. Every element and detail I draw into the stories are meant to hold their attention for the longest period of time possible and hopefully provide them with enough fun and intrigue that they reread the book multiple times. Any deeper message or substance will resonate with the reader if they can appreciate and enjoy the story well enough that they remember and think about it long after they put the book down.

At first, what motivated me was money. I thought, foolishly, that we could make a living out of this. After almost 2 decades, I still maintain a day job story boarding TV ads and doing TRESE on the side. What motivates me now is that I love drawing and telling stories. Apart from my family, pets and friends, this art defines me absolutely. This is my religion. It’s what keeps me from being completely corrupted by the dark side. Story boarding makes me a living but TRESE keeps me alive.

ND: What’s the best piece of artistic advice you were given? What advice do you give artists trying to break into the industry?

KB: Probably the best advice I was ever given and I will always live by is from my friend Raffy. He told me to always be a student and never the master. My advice to aspiring artists and writers who’d like to break into the industry is don’t try to break into the industry. Keep making the comics that you love, enjoy them, share them by photocopying or publishing them online even if nobody reads them, at first. Keep enjoying and doing them until you get so good, the industry has no choice but to notice you. It might not work for everyone but that’s how we did it for the past 20 years. I’m not really sure if it worked but, who cares, we enjoyed them.

ND: What is your creative process behind making TRESE and how has it evolved through the years?

BT: When we started work on TRESE back in 2005, Kajo and I both worked in ad agencies and our offices were on the same street. Kajo was the one who came up with the idea of doing a monthly comic book. And my reaction was, “That’s impossible! We’ll never get to do a monthly book!”. The typical ad agency life meant spending a lot of nights doing overtime and working on TV commercials that needed to be shot yesterday. Kajo said if I can give him a 20-page script a month, he can draw one page a day, so after 20 days we’d have one issue.

I dug up that old TRESE script. The 20-page limit fenced me in, because if Kajo didn’t tell me to limit it to 20-pages, then I would’ve taken forever writing that story. I gave it to Kajo, and everyday Kajo would email me a brand new page. And we just kept doing that for several months until we have five, six stories. In 2006 we pitched TRESE to Visprint, they said yes, and we launched TRESE Book 1 in 2007. Somehow, in between juggling our day jobs, being fathers and husbands, we were able to finish six TRESE graphic novels.

Kajo will still send me a text every now and then with a new idea. I’d say, “That’s impossible! We’d never get that done!” Kajo will tell me that we can do it and we end up getting it done anyway. 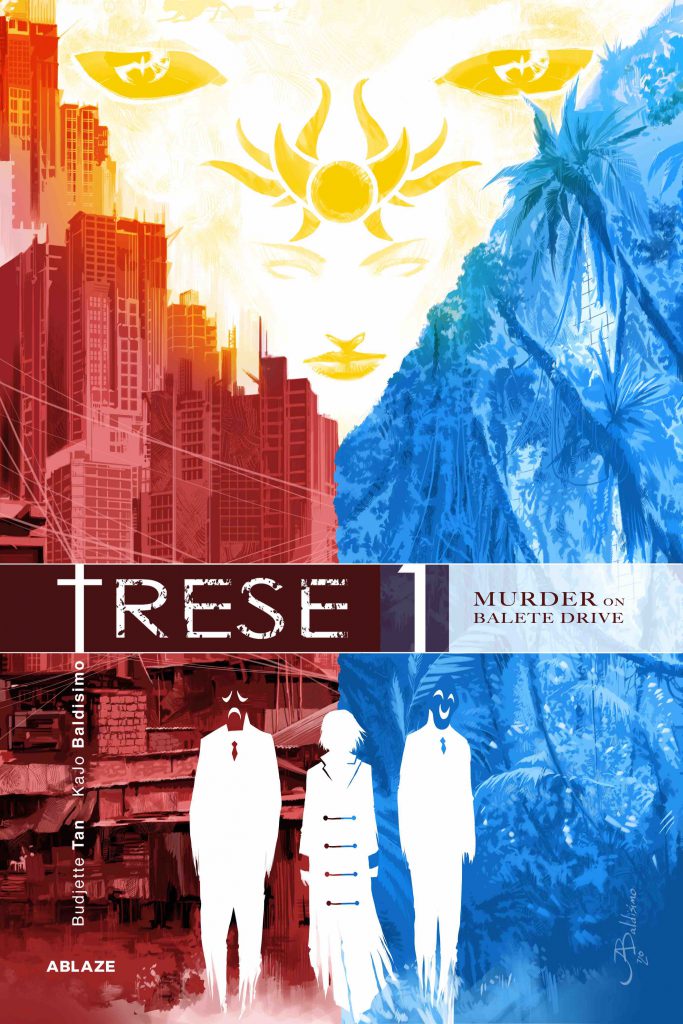 The flag cover is an exclusive alternative cover which can only be bought here for US/Canada and from here for the Philippines. The interview was slightly edited for length and clarity.