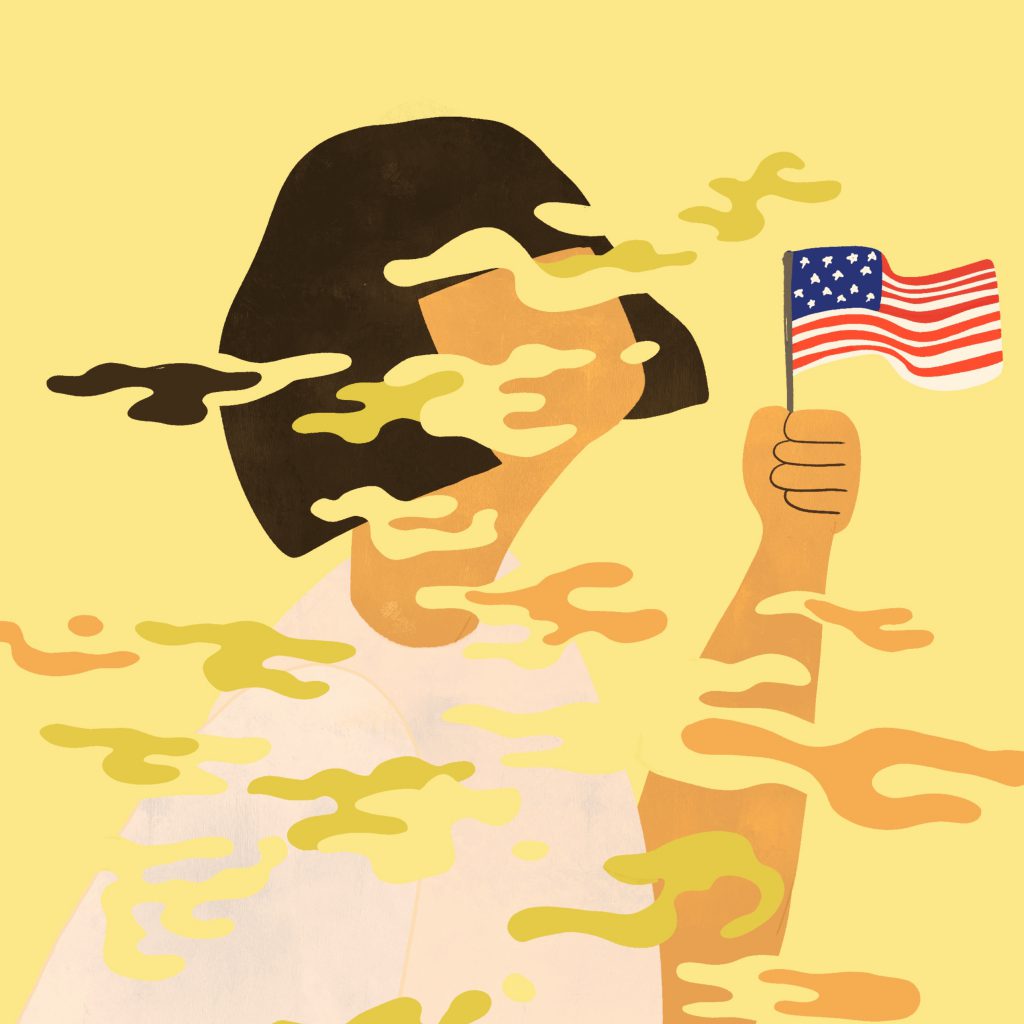 Yi-shuan (倚旋) was difficult for them to pronounce and mama (媽媽) didn’t want me to stick out more than I already did or spend the rest of my life correcting people. So when my parents were filling out our immigration-papers, I got a new name. This would be my third name by age six.

My paternal grandfather, my Ojisan (おじーさん) picked the name was I born with, Ayako Saitou. じーじJiji, our common nickname for Grandfather in Japanese, always spoke to me in three languages at a time: Zhong wen (Mandarin/中文), Nigongho (Japanese/日本語 ) , and Min nan yu (閩南語/Taiwanese), which sounds confusing, and often was. But the combination of all three brought together everything I knew into a continuous string of languages that all reminded me of my early childhood.

Many of my Ayis (阿姨 / Auntys) and Shu shus (叔叔/ Uncles) moved to California before my family did, and they sent letters to my parents. I only found out about the letters after digging around in my parent’s basement one winter break after I had began college. The letters they sent detailed the treatment of Japanese people in America after the attack on Pearl Harbour. Japanese communities were being sent to internment camps en masse, and the only reason my relatives in America weren’t also interned was because they had my Shu shu’s Chinese last name. Nobody ever found out that my cousins were one quarter Japanese like me.

After the allies won the war, Japan and China swapped roles being the enemy and the ally to the West—Chinese in America were expected to be fifth column communists, as J. Edgar Hoover frequently suggested before Congress and throughout the McCarthy era witch-hunts. May 阿姨and Tom 叔叔, who had been able to come to America as a result of being categorized as “Chinese”, were now finding their mail routinely arriving opened and damaged. I found out after college that much of my extended family who were registered as Chinese recall having their phone lines tapped and being followed at some point by strange unidentified vehicles. The older generation tries to forget about that, but many of us nisei (二世/ second generation)still talk about it.

In school I learned that after the Allies won the war, Japan was forced to cede all overseas possessions.  Papa (パパ) told me that many Taiwanese people thought that the Guomingdang (國民黨/ Chinese Nationalist Party) would liberate Taiwan. But when the Guomingdang came to Taiwan, they started to erase all vestiges of Japanese rule and confronted local populations as enemy collaborators. This was when my name was changed for the first time, to a Chinese name, that wouldn’t draw attention. People were killed to evoke fear, goods were seized, and businesses were looted. It was a bad time to be of Japanese descent in Taiwan. Businesses were at the risk of being raided at any point, so this time was made even worse for mama and papa, who owned a large business, exporting Taiwanese-dried foods. After the February 28th incident in Taipei, my parents decided we could no longer live in Taiwan safely. We soon joined the rest of my family in California.

In America, nobody cared if the Chinese had killed your neighbours and your closest friends, you still had to prove that you weren’t one. Otherwise you were a commie.

The only waiguoren (外國人/ foreigner)  I knew before going to college who knew anything about Taiwan was Emily’s dad. Dr. Anderson was a professor at the Oriental Studies Center at UCLA. At first, I was excited to have someone know a little bit about where I was from, but the excitement quickly turned to embarrassment. Every time it was Dr. Anderson’s turn to drive us home from baseball, he made all the other kids be quiet so he could ask me questions about my family’s history. “Tell me about when the Chinese invaded, wouldntcha?” He would always ask the same things, and the questions always turned into declarations of how great America was.

But America wasn’t so different from Taiwan. When I was sixteen, I saw a public notice in Chinatown that warned of potential communist Chinese spies and subversives in the area, encouraging “innocent residents” to report suspicious activity to the FBI. The exiled KMT members who were killing civilians in Taiwan asked the same questions. In America soldiers didn’t fire at you in the streets; they followed you to your home and tried to deport you. In America, people don’t care where you are really from, despite asking you all the time. It wasn’t like being black and facing blatant racism; it was calculated. They wanted to know whether you were a threat or an ally. We became the model minority because we were politically silent, like our neighbours Mr and Mrs. Watanabe, who never spoke about internment. Their daughter Naho Chan (ちゃん) only found out about internment when she was 22.

I attended college in the 1960s, at the peak of the Civil Rights Movement. Which was uncoincidentally when the model minority stereotype of Asian Americans solidified. Just weeks before I left my childhood home in Los Angeles, the Watts riots took place, and demands by African Americans for economic equity and formal political rights, along with the gradual dismantling of Jim Crow segregation in the South, had also plunged racial policy into a crisis. This was bad timing for America. Deep in the ideological war, America needed to show the world that it was a liberal democratic state where people of color could enjoy equal rights and upward mobility. Somehow the political silencing that came from the trauma within the Asian American community, stemming from the internment of Japanese Americans and the FBI investigations of Chinese communities, came to serve as yet another political tool. The Cold War construction of Asian America showed that racial minorities could be successfully assimilated as a result of political obedience and self-improvement. I began to dislike this paragon of ethnic virtue more and more, which was then used to blame Black people and other minorities for their tangled pathologies.

On one of the first days of my freshman year, I sat in the school yard with my best friends. Tamira who was Black and Lucy who was white, talking about the civil rights movement actively taking place around us. Tamira quickly told me that “You’ve got to decide if you’re Black or white.” Lucy agreed. I carefully considered the question.

Maybe I was Black because if it weren’t for the civil rights movement, I probably wouldn’t have been admitted into an Ivy League school. At the same time, the Asian-American success stories seemed to be a sign of a triumphant ethnic assimilation. I felt like white people loved Asians because we weren’t Black. This new national narrative for the atomic age that Walter Lippman had dubbed the “American Century” only left me with more questions.

Three names in my life, each one serving a political purpose, assimilating me. But I was still too fearful of the Chinese to deny my Taiwanese roots. Too ethnically Chinese to actually be Japanese (though we pretended). Too young to have seen the horrors of internment to be an assimilated Asian American. Too privileged to be Black, but too exotic to be white. I guess there wasn’t a name for me in American yet.

The title Nonemu (ノーネーム) American translates to No Name American.

This story is based off a collection of stories told to me by my maternal family, who are from Taipei, Taiwan. The genealogy of mother’s family, like many from Taiwan, reflects sites of colonial violence in our history. Weaving together languages and cultures from East Asia, Nonemu American short story was intended to work against dominant historiography of Taiwan, which has and continues to be reduced to simple narratives. This story is a mirror of the processes I undertook to (re)interpret and center the complexity of my family’s island identity within a non-white settler context in “America”. The main character is a combination of myself, my mother, and my grandmother. Each one of us go by multiple names in different languages. Ayako is my grandmother’s Japanese name and Yi-shuan is the Chinese name I was born with.

My grandparents owned a Taiwanese dried foods company in Taiwan, which was restarted on the West Coast of Turtle Island by my grandfather and his siblings in the 1960s and 1970s (and still runs to this day!). Because of the spread of migration across the Coast, my mother often went back and forth, collecting stories from her aunts and uncles living in California. My mother’s California stories is what originally inspired me to write historical fiction.  I decided to set it in the 1960s after reading Helen Zia’s book Asian American dreams. Helen Zia was born in the 1950s when there were only 150,000 Chinese people living in American. Her book includes details regarding her experiences attending Princeton during the peak of the civil rights movement.

This story is a nod to all East Asian Island people, who’s complicated colonial and neo-colonial histories are often left untold in history and unresearched within academia.

Serene Mitchell (米倚旋) is a Taiwanese Canadian creative based in “Vancouver” and “Montreal”. She is currently finishing her undergraduate degree in Asian North American History at McGill University. Growing up speaking Mandarin and English, her work aims to center the preservation of language and highlight experiences of the children of Asian immigrants in the diaspora.

Lay Hoon aka Arty Guava is an Illustrator and Graphic Designer based in Vancouver. She grew up in Malaysia and spent most of her adult life in Singapore before moving to Canada. She has a Bachelor’s Degree in Bioengineering but chose to make a career switch after about 1 year of working in the field. Art and Design have always been her calling. She is passionate about culture, people and nature and how these themes interact with each other.

This was engrossing I think you’ve got the makings of a very readable narrative non-fiction novel here., Ms Mitchell. Hoon’s artwork capturing our invisibility is the perfect accompaniment. Thanks for this.