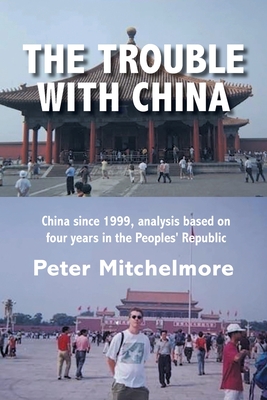 The Trouble with China is the latest addition to the long list of travel literature on China. After accepting a teaching job in 1999 at a college in Wuxi, one of China’s coastal cities, Peter Peter Mitchelmore later taught at a tutoring facility before moving on to a relocation company in Shanghai. Already fluent in German, French, and English, he learned basic Chinese in only six months. A keen observer, he gained insight into China’s problems and the mentality of Chinese people.   Unlike most travel books on China, The Trouble with China doesn’t focus on food or nature.  Rather, it paints a portrait of a nation and its people with an emphasis on sociological and psychological issues.

Peter Mitchelmore’s observation on China happens from 1999 to 2003, a formative period of China.  He witnessed many key events that paved the way for what many Chinese people call “the rise of the great power:” China’s selection as the host of the 2008 Olympics boosted the nation’s confidence and China’s entry to the World Trade Organization (WTO) which sparked its economic boom. To illustrate how fast China amassed wealth during the four years, Mitchelmore gives two observations.  In 1999, he noticed that many of his students had few changes of clothes and often wore the same thing for days. When he was leaving China, he was offered one million RMB to marry a woman who wanted to emigrate quickly. Despite China’s economic boom, Mitchelmore notices that one aspect of China remains: “micromanagement by the government and multiple officials at all levels.” This aspect of China underlies all of the contradictions Peter Mitchelmore discusses in this book.

The most fundamental contradiction is the conflict between communism and capitalism. Although Chinese people now have economic autonomy for the first time since the founding of the PRC, “citizens of the PRC are powerless in almost every way and in such a state where the worst of communism and capitalism combine.” Under this framework, it is not hard to understand why many Chinese people want to get away from China as soon as they have the money.

Under this framework, it is not hard to understand why many Chinese people want to get away from China as soon as they have the money.

One contradiction leads to another. Since the “economics of China is basically a tacit admission that communism didn’t work,” nationalism has become “the only lever that the Party has left to pull.” A few months before Mitchelmore’s arrival, the United States’ bombing of the Chinese embassy in Belgrade ignited mass protests and fueled nationalist anger. On multiple occasions when Mitchelmore talked with students, in class or privately, he was asked to apologize for American’s wrongdoings even though he was a British citizen. In the meantime, although the Chinese government encourages the nationalism streak in the Chinese psyche, its nationalism seems at odds with the country’s prevailing regionalism.  As he puts it, “You can travel the equivalent distance from London to Oxford (56 miles / 90 kilometers) and find people speaking mutually unintelligible dialects. Some parts of China are notorious for ‘linguistic snobbery.”

The book is not neatly arranged in chronological order but rather each chapter unfolds with observations categorized into themes with each chapter dealing with a unique contradiction. For instance, in Chapter 13’s “The Friendliest and the Rudest People in the World,” it is revealed that whether a Chinese person is friendly or rude to another is whether they know each other or not. Whenever traveling by train, Mitchelmore noticed that people would push and shove to get in, but once the train was moving, people suddenly became friendly.  People would happily share snacks as if they’d known each other for years. This dramatic change of attitude is the epitome of Chinese people’s social guidelines. Although people everywhere in the world treat their friends differently from strangers, Chinese people exhibit an astonishing lack of empathy if they don’t know each other. Despite annoyances caused by strangers, he came across people “who [we]re 200% reliable and more incredible than anyone you can meet anywhere.” Many of his students and colleagues often went out of their way for him, and he remained friends with them even after he had left China for many years.   A foreigner’s annoyance might stem from being pushed and shoved, but is further compounded by being stared at from those on the train.  “With no ability to empathize with how you feel… some might stand virtually over you to look at what you’re eating and have little idea why you subsequently get annoyed.”

Mitchelmore’s advice for anyone being stared at by a group is to say “ni hao” (hello) to them, or as he would put it, “I would turn and say ‘ni hao’ and the whole group would break out in a grin as if I had made their day.” He also notes that if a foreigner can get out even a few more words of Chinese than “ni hao”, Chinese people will often say, “Your Chinese is very good,” with a huge smile on their faces.

The lure of the book is its deep dive into the mentality of the Chinese and thus offers his personal experiences. However, readers should bear in mind that it has been sixteen years since Mitchelmore left China.    He finds that the Chinese are the friendliest people on earth, and he guesses that their friendliness to him might have something to do with his status as a foreigner. It’s said that the Chinese like to play a generous host with foreign visitors. This wish to impress foreigners, coupled with their appreciation for those who can master a little Chinese led Mitchelmore to believe that Chinese people think they have long been misunderstood. When China was announced as the host of the 2008 Olympic Games, the Chinese people hailed it as an “opportunity for foreigners to understand us better.”  Mitchelmore wonders why they didn’t see it as an opportunity to understand each other better. Feeling misunderstood led to many Chinese adopting sets of double standards. Mitchelmore met a Korean businessman who complained to him about Chinese consumers, “‘If I was selling this table to a Chinese with a small scratch on it, they would call it bad quality. If they were selling to me and I did the same they would say that this is a Chinese table and that I was being unfair.”

Indeed, Peter Mitchelmore harbors more negative opinions than positive of the Chinese people. He thinks that the Chinese people suffer from a “lack of imagination and fear of making decisions,” and that the political system enables and in fact, encourages dishonest behavior.  He also says that Chinese culture is a “culture of not trusting and cheating one another.” But he doesn’t think that Chinese people should be blamed for these shortcomings since “people don’t get the system they deserve, just as those in charge don’t deserve the privilege of leading them.”

According to Mitchelmore, the root of all problems lies in the fact that “there was a lack of open, honest and genuine discussion about the country and its society.”  As such, he sounds like a sympathizer to the ordinary Chinese, though he does relent that “I really do mean and want the very best for China,” he writes.   And I believe him.

As such, he sounds like a sympathizer to the ordinary Chinese, though he does relent that “I really do mean and want the very best for China,” he writes.   And I believe him.

The Trouble with China may be categorized as a travel book on Amazon – no doubt it does give good travel advice – but it is more than just another travel book.  It is more accurate to be compared with Michelangelo Antonioni’s 1972 documentary, Chung Kuo, Cina, because both describe something close to the real China. In 1972, Antonioni was invited by the Chinese government to film a documentary. The government handed him a prescribed itinerary and only allowed him to shoot a state-approved version of reality. While working, Antonioni simply pointed his camera at normal people going about their ordinary lives. His work result, Chung Kuo, Cina, was attacked by Chinese authorities as slanderous, though it is just a plain presentation of what China was like. Compared with Antonioni, Michelangelo had more freedom during his time in China. He admits that “no matter what your opinion about the government of China is, at least it now refrains from things like treating educated people meeting in teahouses as unpatriotic.” Being born in China in the 1960s, I think it is very true that China is much more open and relaxed than it was years ago, though obviously, it is still not open and democratic enough.

Mitchelmore presents a fascinating mix of travelogue and sociological study. Although he criticizes the Chinese government and its citizens, he encourages his readers to travel to China: “In the end, it will make you glad that you got into a plane to the Middle Kingdom.”  His “street” advice will help tourists as well as businesses and students. I also recommend it to my fellow Chinese immigrants living in Western countries as this book can be a mirror for us to reflect on if we have brought the old mentality to our new lands.

The Trouble with China: China since 1999, analysis based on four years in the Peoples’ Republic
FriesenPress (September 14, 2020)
Paperback & Kindle
Anna Wang’s rating: 4 out of 5 stars.