Google Doodle celebrates the birthday of Jim Wong-Chu, who was an activist, community organizer, poet, author, editor, photographer, radio producer, and historian.  Jim devoted his life to amplifying the narratives of the Asian Canadian community and was one of the founders of ACWW and the very first editor of Ricepaper Magazine.

Born in Hong Kong on January 28, 1949, Wong-Chu moved to Canada when he was 4, and as a young adult, he settled in Vancouver, British Columbia. During the ‘70s he worked as a community volunteer and became interested in the use of literature to explore his identity as a Canadian of Asian heritage. In 1986, while studying creative writing at the University of British Columbia, he compiled his work into the collection “Chinatown Ghosts,” one of the first poetry books ever published by a Chinese Canadian author.

But Jim didn’t just want to tell his story; he wanted to tell the stories of all the undiscovered talent in his community. In 1989, he began to sift through every literary magazine in the UBC library to identify pieces written by Asian Canadian writers. With co-editor Bennett Lee, he honed this collection into his first of numerous anthologies, “Many Mouthed Birds” (1991), a touchstone in the emergence of the genre of Asian Canadian literature.

To promote the genre, Jim co-founded the Asian Canadian Writer’s Workshop in 1996, which–along with its literary magazine Ricepaper (now a digital publication)–has continued to elevate the voices of the Asian Canadian literary arts movement to this day.

Happy birthday, Jim!   We miss you! 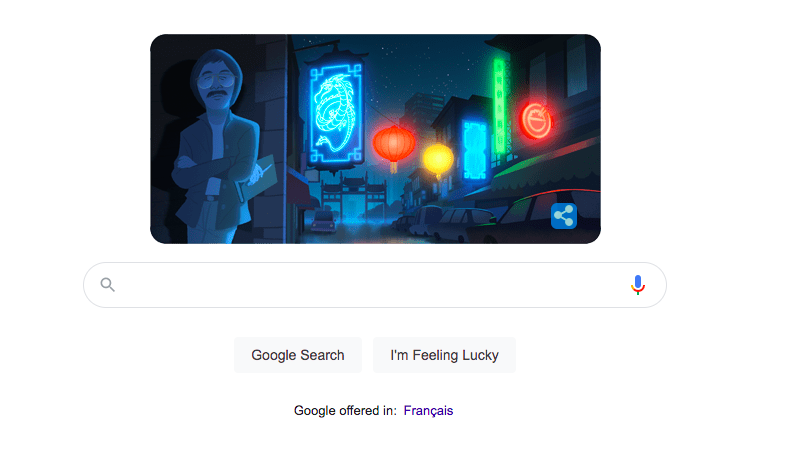 Guowei “David“ Lü is an artist/engineer based in San Francisco. He makes the Doodles on the Google Homepage.

Happy Birthday. Thank you for all you’ve done.

Happy Birthday! The world needs more people like you. Inspiring!