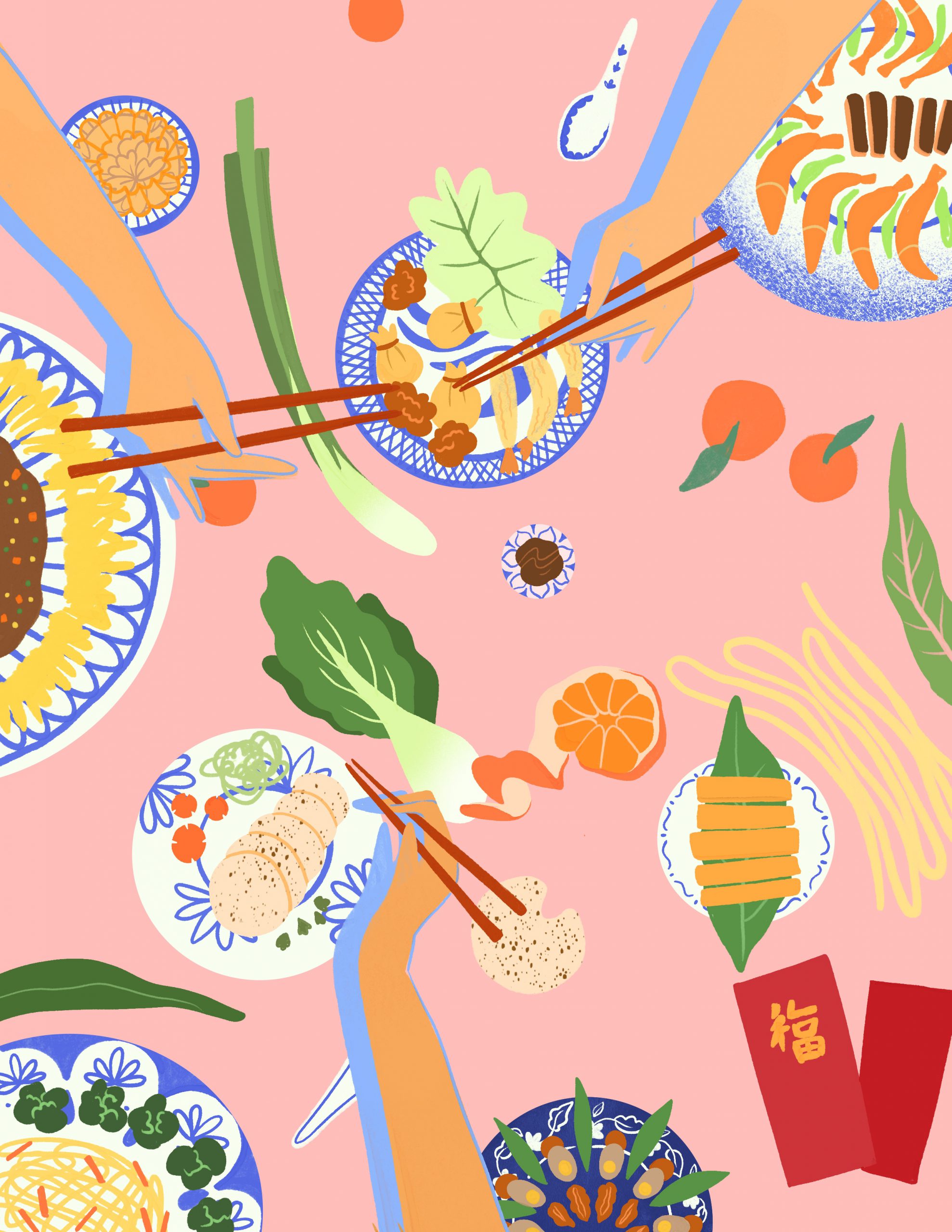 Tin Yuet, Sky Joy, also a public estate building’s name:
meals by good friends’ parents always make you doubt
if yours have been serving you the right recipes.

We ate everything. Wai Ching’s parents could deep fry
a slipper in batter right between tempura and nuggets,
served with five-spiced salt and fresh lettuce leaves.

We also didn’t know rice cake slices pan-fried with eggs
would taste so much better with chopped spring onion.
Shantou’s Choi Cha with a hint of pu’er, dried tangerine peels

mixed veggies and glass noodles. Even the most picky
eater among us downed three full bowls — a hunger
in the command of well-meaning, wishful parents,

who kept asking us to lose weight while making us eat
beyond our normal capacity. We’re also picky as to
which tradition to follow. Getting red packets from friends

younger than us made us believe in marriage for a while.
We finally reached the age to mean what we say
in the shower of four-worded blessings: Stay Young

Forever. Dragon-Horse-Spirit. Happy New Year
for the second time. We all deserved that after 2020.
After dinner, we looked out the window the way

F.R.I.E.N.D.S. saw “ugly naked guy” .  It’s the same thing,
really. Wai Ching said as I tried to decipher the words
shown in a light show all red and yellow on a skyscraper

not unlike IFC across the border between Shenzhen and
Hong Kong. I thought I saw the phrase “people” but
really, I was just distracting myself from the food coma.

Cheng Tim Tim is a teacher and poet based in Hong Kong. Her poems have been published in Cha: An Asian Literary Journal, The Offing, SAND Journal, Cordite Poetry Review, among others. She is one of the co-founding editors of EDGE: HKBU Creative Journal. She believes in music and words that heal and provoke.

Lay Hoon aka Arty Guava is an Illustrator and Graphic Designer based in Vancouver. She grew up in Malaysia and spent most of her adult life in Singapore before moving to Canada. She has a Bachelor’s Degree in Bioengineering but chose to make a career switch after about 1 year of working in the field. Art and Design have always been her calling. She is passionate about culture, people, and nature and how these themes interact with each other.