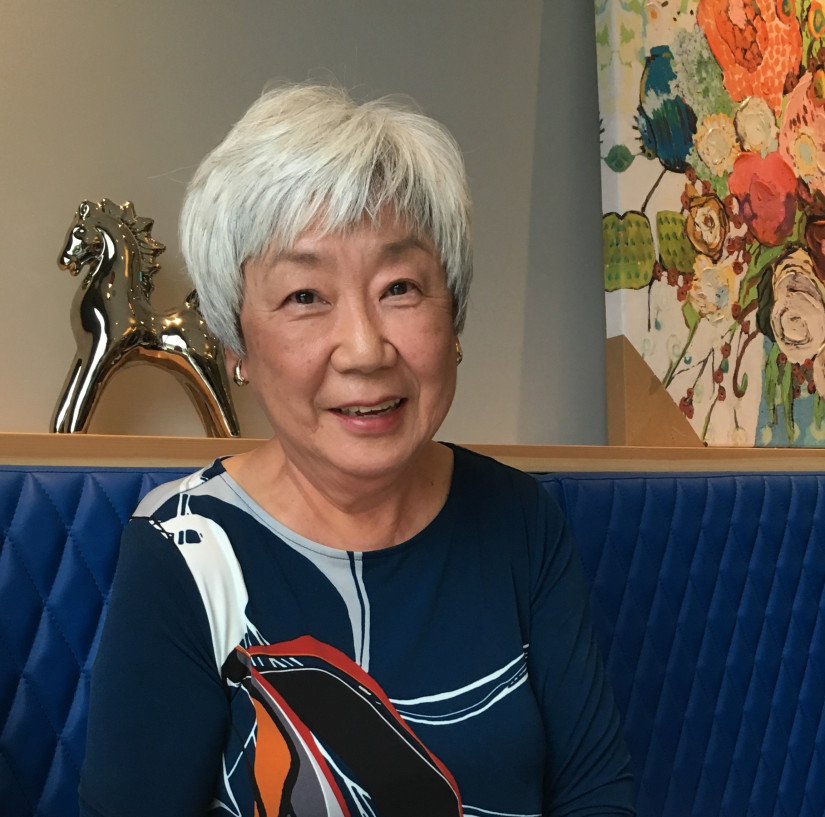 Diana Morita Cole is an author, storyteller, and winner of the 2017 Carver Award for Emerging Writers sponsored by the Nelson & District Arts Council and the Kootenay Literary Society for her book, Sideways: Memoir of a Misfit, Her writing has been published in The New Orphic Review, short-listed in the Open-Season Competition of The Malahat Review, nominated for the Pushcart Prize, and included on the reading list of three institutions of higher learning in Canada and in the United States. The Columbia Basin Trust awarded her with a grant to self- publish her memoir. Founder of the Nelson Asian Heritage Event, Diana tells stories about her birth in the Minidoka War Relocation Center and the persecution of Japanese Canadians and Japanese Latin Americans during WWII.   LiterASIAN’s Sophie Munk interviews Diana as part of a series of profiles of this year’s lineup of authors.

What inspired you to write your memoir, Sideways: Memoir of a Misfit? What was this process like?

I tried to write about the confusions about my identity several times, but never had any thoughts about turning what I wrote into a book. Jenny Craig, a Nelson best-selling author and celebrated winner of the Stephen Leacock Award, formed a memoir-writing group composed of immigrants who wanted to write their stories. Within this milieu, I found the encouragement and formal structure to explore the intimate details of my youth.

And although that group eventually disbanded, I submitted what I had written to a second writing group. Surprise! Surprise! They loved it and encouraged me to write more.

I submitted my first chapter, entitled “Mama’s Belly” to the 2013 Open-Season Competition of The Malahat Review, and it was shortlisted and then published in The New Orphic Review in 2014

When I began writing my story, I had no thought of publishing it. I was only interested in learning why I was a misfit. Had I thought about writing my story for publication, I think that intent would have seriously biased my pursuit of the truth

You are set to be the keynote speaker and panelist for Opening Night at the KDocsFF (Kwantlen Social Justice Documentary Film Festival) screening of And Then They Came For Us, a story about the Japanese American mass removal from the West Coast. Given your experiences and activism, what does this opportunity mean to you?

The opportunity to be the keynote speaker for Opening Night at the KDocsFF 2021 is both a surprise and a responsibility. Surprise, because a kid who grew up in the slums of the Windy City never envisioned she’d ever be considered, much less invited, to give the keynote address for such a socially significant event. Responsibility, because I understand that I must take full advantage of this unique opportunity to tell the stories of the injustices that have directly affected my life and have distorted forever the meaning of democracy on this continent.

Your nonfiction story, “Two Human Rights Complaints,” is required reading for Ethnic and Cultural Concepts and Principes I at SFSU and has been cited in Dr. Leeming’s doctoral thesis. What shocked you the most about writing this piece, and what do you hope to see in the future of environmental activism?

The question above conflates two separate topics. “Two Human Rights Complaints” is a story about human rights issues, and Dr. Leemings’ references to my writing about environmental activism in Nova Scotia is another subject.

While living on our farm in Clare County, Nova Scotia, I founded two environmental groups whose activities resulted in a petition signed by the largest number of residents of any county in the province. Dr. Leeming references an article that reported on the proceedings of the 1983 Ottawa National ENGO Meeting, which I attended. The second article Dr. Leeming references, also published in South Shore Environmental Protection Association Newsletter, offered my opinions regarding the outcome of the lawsuit filed by a group of Cape Breton landowners and two Mi’kmaq against three foreign-owned pulp and paper companies that were planning to use Agent Orange in their forestry management practices.

Environmental activism must advocate for the destruction of those profit motives that are polluting and harming our planet so that our economies can prioritize the health and care of our biosphere.

“Two Human Rights Complaints” is a story about separate incidents of hatred that took place within two educational institutions in Nova Scotia. In my story, I reference an instance where a group of male Muslim students, who formed part of the Executive of the International Student Society, evicted a female Muslim student, who was the treasurer, from the university’s International Student Room in order to exclude her from the Executive meeting.

In this story, I also reflect on the dangerous situation our son, Adam, faced at a middle school, where he endured violence and racism from his white classmates. The first incidence we cited in our complaint was regarding a student waving a fiery milk carton in Adam’s face as he attempted to enter a classroom. The second instance had to do with a student, who frequently called our son, “Jap,” slashing Adam’s school bag with a knife, and the third act was regarding the willful destruction of our son’s industrial arts project by students tossing it around the room while laughing and chanting slurs. We filed a complaint with the Nova Scotia Human Rights Commission to pressure the school board into adopting a Quaker anti-racism and peace curriculum.

Neither of these two cases was resolved satisfactorily. Although the President of the International Student Society at the university was advised by the internal University Human Rights Officer to include the treasurer in all their meetings, the President simply never called another meeting again. And, we left Nova Scotia in order to rescue our son from the hate he was experiencing from his classmates and from the incompetence of the teachers and administrators of the school where he was enrolled.

Professor Rita Takahashi read “Two Human Rights Complaints” and thought it worthy of inclusion in her reading list for the graduate students of the Social Work department at SFSU.

Diana Morita Cole will be at LiterASIAN 2021 as part of a panel, “Independent Authors or Self-Published Authors? Stories that We Live to Write About” with Jackie Lau, Diana Ng, JF Garrard, & Cynda Yeasting May 8th, 12.00pm – 1.30pm (PST).  Register here for your ticket.

Sophie Munk is a graduate of McGill University, where she majored in international development and history. She is currently a coordinator at PCHC-MoM Society, one of ACWW’s partner organizations. She has a background in community based initiatives, research, and service. She is planning on pursuing a career focusing on the relationship between culture and health governance in an international context.