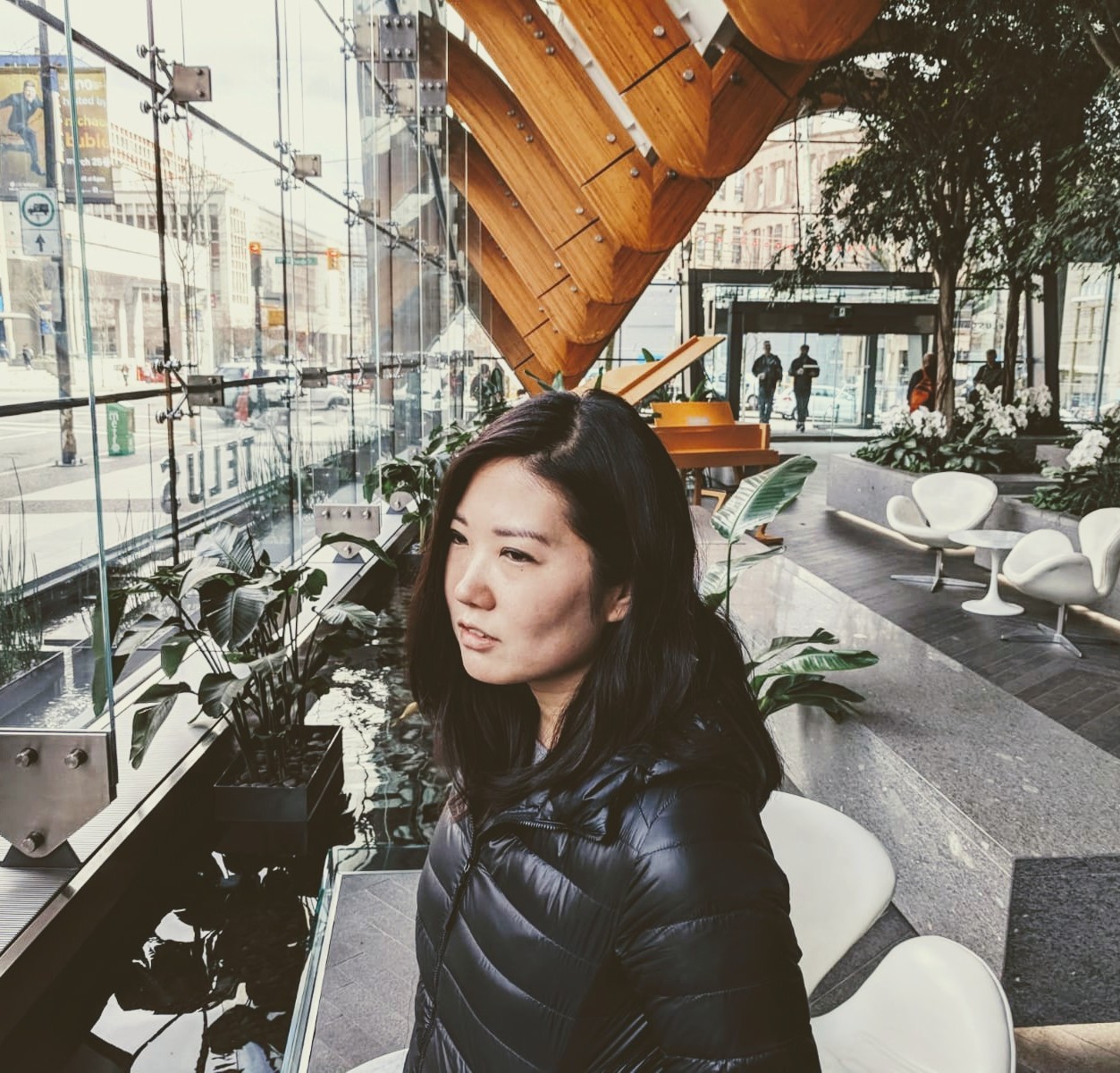 Kendra Ellis is a Korean adoptee and transplant from Seattle with a background in the disparate fields of comparative literature and computer science. When not buried nose-first in a text, she can be found hunched over a keyboard trying to make a computer do useful and/or delightful things.  Ricepaper interviews Kendra as part of its profile of the magazine’s talented team of literary editors.

This is a difficult question to answer, I can’t say that there’s one book or one author that I can single out as my favourite. So many come to mind – Nabokov, Knausgaard, Cathy Park Hong, Joseph Brodsky, Maggie Nelson, W.G. Sebald, Rachel Cusk, Kundera, Alexander Chee, Chekhov, the list goes on.

Banana Yoshimoto holds a special place on my shelf. Her work influenced my first writing attempts and introduced me to the world of Japanese literature. In high school, I sought books that departed from what I felt were the stale British and American classics assigned in my English class. I scanned book spines for unusual or foreign names, and that’s how I discovered Yoshimoto’s Kitchen. Kitchen explores the difficulty of self-definition, whether it’s learning to accept and act on what you feel, or living with the effects of embracing a self that others don’t like.

Reading Kitchen was revelatory – it was the first time that I felt the kind of urgent inspiration that young American men often find in Salinger or Fitzgerald (I remember my friend Luca was so taken with The Great Gatsby that he started calling everyone “kid,” affecting his own version of Jay Gatsby’s “old sport”). I tried to copy Yoshimoto’s spare, friendly prose, which I found magnetic. It turns out that’s a terrible strategy when writing an essay on Oedipus for a tenth grade course. When I got my paper back, I saw that my teacher had written “pedestrian” across the last page; I neatly concluded that channeling Yoshimoto had failed and that I should pay more attention to the interplay between form and content. Looking back, I’m sure my analysis of Oedipus was just as uninspired since I barely registered the material. But I felt that the choice that I made about how to communicate produced an effect, and this encouraged me to keep writing and experimenting. This was my first real lesson on style, voice, and tone.

Ricepaper: Tell us about your background as an Asian American/Canadian? How has that informed your writing and editing?

I usually refer to myself first as American because that’s my nationality, and when pressed for clarification, I’ll explain that I was adopted from South Korea as an infant. Like many transracial adoptees, I’ve developed a strong sense of disidentification, especially as an adult, and the terms Korean American and Asian American eclipse some important aspects of my background. I’m the child of parents whose families immigrated from Germany and Scotland three generations ago, who have roots in the Pacific Northwest and Alaska. My asianness is something that I experience in strange, uncomfortable, or amusing frictions with others. That may be why I’ve become an intensely private person.

Something you learn to do when you’re a transracial adoptee is to explain yourself, to have a canned response to unwelcome personal questions like “Why don’t you look like your parents?” (Even worse is when you have to explain to someone, usually a cashier, that you are indeed with your parents and that you’re not an exchange student, did you not just hear my standard American accent?). It’s common to repeat the same simple narrative that’s fed to you from a young age, the Korean version of which, at least for the younger generation of adoptees, is: My birth mother was a young single woman who couldn’t take care of me and decided to give me a better life by sending me to [America/Sweden/France/Australia/…] where I would have better opportunities.

Eventually you start to wonder if that really is the story, and whether as James Wood puts it you’re relying on an “easy, lazy grammar” devised by someone else. I developed a sensitivity to storytelling as identity building early on, and fell into writing to find a new way to tell my story.

But self expression is hard. I don’t write nearly as much as I’d like to, and what I do write rarely sees the light of day. All of this overthinking about who I am and what I have to say – the fear of being held as an example or a spokesperson for Korean adoptees, or Asian American women has hardened into a reticence that I have yet to crack.

Ricepaper: Tell us about your experience at Ricepaper? How long have you been part of the team? What’s a highlight that you can share?

At Ricepaper, where I’ve been a literary editor for just under a year and a half, I’ve found a comfortable space where I can engage with writers who are brave or confident enough to submit their work for judgement. I’ve had a fantastic experience with the magazine and in Vancouver meeting third culture kids whose families ended up in Canada by way of South America, third or fourth generation Chinese Canadians, those who have spent most of their adolescence apart from their parents, studying in North America and traveling back to their home countries maybe once a year. It’s exciting to feel that there’s vitality and a diverse creative energy in the community.

One of my favourite pieces to edit was “The Lego Teacher” by Felix Wong. It’s hilarious and honest. Wong includes so many examples of the kind of situational comedy that only occurs in real life, and captures the awkward tangles you get into when you’re young and trying to fake it till you make it. I hope to edit more writers like him, whose work helps to redefine or transform Asian-Anglophone writing, and eventually add my own voice to the chorus.