“Not Too Sweet” by Lillian Wang Selonick7 min read 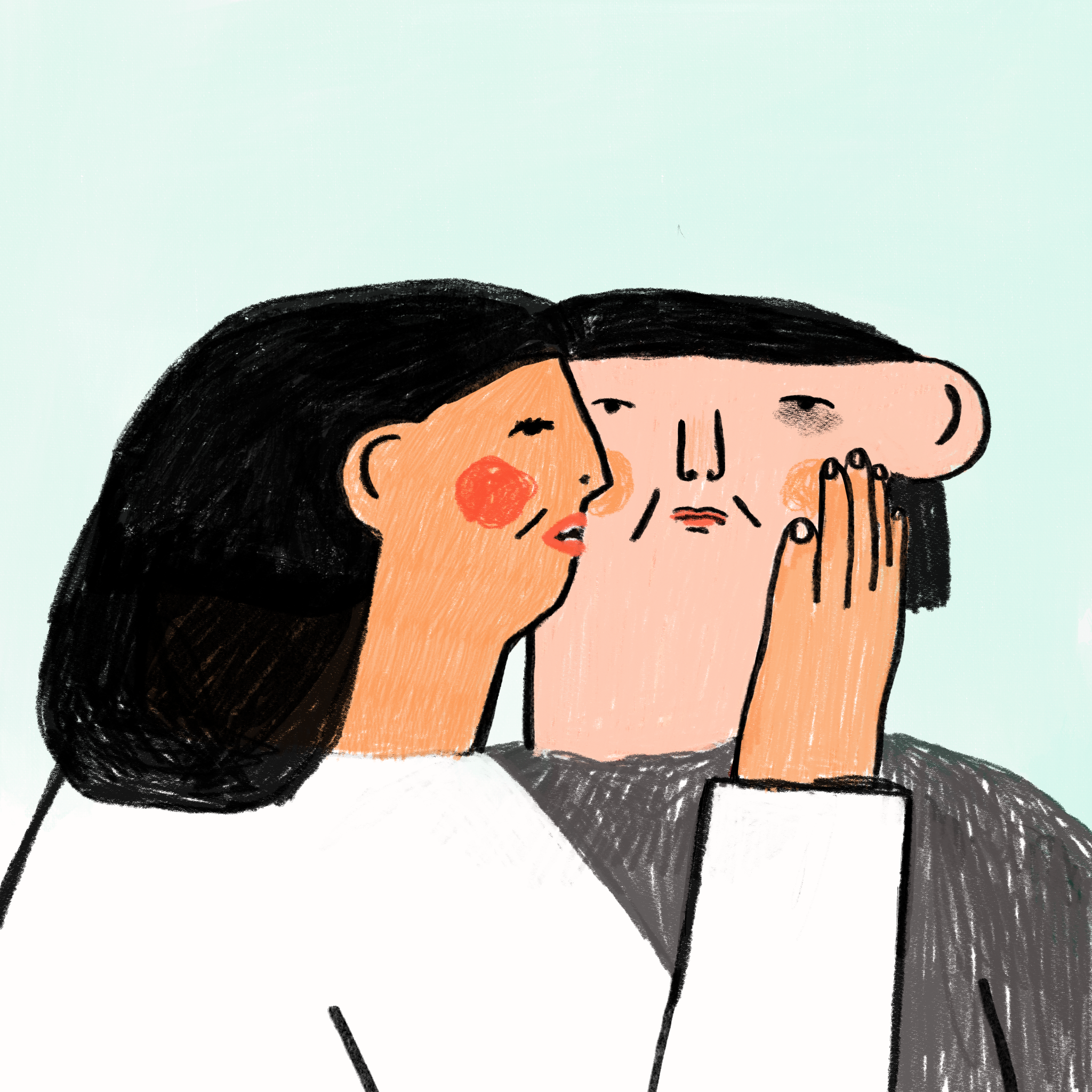 It happened because I looked poor today.

My mother was an elegant woman, even in the most undignified chapters of our life in America. She said that spending her youth under the boot of Japanese occupation taught her the importance of pride. I was ashamed of her pride—as a child I blushed and cringed at the imperious way she spoke to the country-accented shopkeepers in Koreatown, as though it still mattered that Mama grew up in a big, gated hanok in Seoul with many servants. How could Mama’s yangban genealogy matter when we were all poor strangers struggling to get by in this new country with our stolen scraps of English? Many years later, when my daughter was five, she criticized my nanny so bitterly that the nanny, a kindhearted mother of four from Daegu, quit on the spot. I yelled and cried at Mama—what did it matter that the nanny’s cooking was unrefined and the nursery rhymes she sang to the baby were in a coarse dialect?

Mama clung to her pride like it was a precious currency all her life. She taught me to sew, so we always had nice clothes, even when we moved from apartment to rundown apartment in the parts of town only fit for Blacks and immigrants. If she had been alive for me to run to, bloody and perplexed, after today’s attack, I know what she would have said. She would have brushed my tears away, looked me up and down, raised a thinly-penciled eyebrow, and gently chided me: “This is what happens when you don’t look proper.”

I’m now more than twice as old as she was when my father died and she made the incomprehensible decision to uproot her life and three small children to take her chances in a place where she would never learn the language or remarry for love. I learned English, worked through school, was naturalized, moved away, got a PhD in English Literature, married a White man, gained tenure, raised a daughter, wrote several influential books, chaired a department, and entered semi-retirement. My daughter married a White man, too. Sometimes I hold their blonde baby on my lap and search her face for some trace of me—an epicanthic fold, a curve of the cheekbone, a generous nostril, anything. When I babysit her, I wonder if passersby can find any family resemblance, or if they think I’m the nanny.

The arc of my life has been unimpeachable. But a lifetime of achievement and assimilation and miscegenation meant nothing because today I wore my cheap Gap jeans and my husband’s old t-shirt to ceramics class on campus.

I suppose it was the bags as much as the t-shirt. Somehow, in pottery, you end up with a lot of bags—canvas tote bags, plastic grocery store bags, Ziploc bags of tools, bags filled with other bags. I’ve even joked with my husband about being a bag lady. It seemed funny, then, that I could be a bag lady. Me, with my impressive CV and distinguished lawyer husband and recently remodeled Georgetown townhome. We have a beach house, too, in Rehobeth. It’s funny that I would be mistaken for a homeless woman or a can collector or one of those crones you always see bent and laden with plastic bags from the musty Oriental Market, a creature entirely lacking interiority, even when her face looks like a more weathered version of your own. Even when her eyes are your mother’s proud, searching eyes.

I had some extra bags today because I was bringing a treat for the other ceramics students—mostly gossipy retirees from the community, but also an assistant professor from Applied Mathematics and a couple of intellectually disabled women who play with clay through some kind of new age therapeutic program. The visual arts majors who take classes for credit in the same studio give our weekend group of amateurs a wide berth. The physicality of wrestling a lump of clay into a useful shape is hypnotic. I like to imagine that I am partaking in an experience shared by my distant Goryeo dynasty ancestors as they labored over their intricate celadons.

I brought two boxes of Trader Joe’s ice cream mochi to share with the group: one box of chocolate, vanilla, and strawberry and one box with mango and green tea flavor for the more adventurous. Ice cream mochi is far too sweet for me, but I thought they might like it. I once brought a package of songpyeon, a kind of ddeok eaten during the fall harvest season—plump little rice cakes filled with crushed sesame seeds. It’s my favorite dessert—chewy, nutty, and not too sweet, but in the end, only Sven, the assistant professor, and Doris had tried a piece. Doris took a tentative bite and chewed behind pursed lips for a long time. She thanked me for bringing something new and then wrapped the other half in a napkin.

I thought ice cream mochi from a major grocery chain would be an easier way to introduce them to Asian rice cakes. I wanted Doris to like the mochi. I wanted her to eat a whole piece of ddeok. I wanted all of them to like it. I wanted them to crave ddeok like they crave chocolate chip cookies and apple pie. They’re selling kimchi at Whole Foods these days, but I thought that if Doris could learn to love ddeok, that would really mean something.

As it turned out, no one ate mochi today because a block from the studio, that young man walking towards me down the center of the sidewalk cocked his arm back and punched me in the face. My head snapped back before I understood what had happened. I felt a crunch and tasted copper dripping down my throat. My arms flailed, straining to catch my fall as I toppled over backwards, but the bags on my wrists swung chaotically, confusing my instinctual body mechanics, and I only managed to put out one hand in time. I landed hard on my tailbone, teeth snapping shut on one tender edge of my tongue. That young man didn’t say anything to me. He didn’t even break his stride. He just kept walking—that’s what they told me, anyway. I was on the ground and didn’t notice much after that.

When the ambulance arrived, I had trouble answering their questions. Every part of my face protested when I moved my lips. My wrist screamed at me, too, expanding to fill my consciousness until I could not remember ever being anything other than a wrist, a face, a nose, and a tongue in agony. I was amazed that it was possible for me to feel this kind of pain. I thought I had lived my life—and that my mother had lived hers—in such a way that this kind of hurt could never touch me. I am a generation removed from the brutal indignities of colonization and war, and I thought it would be enough. It was a shock to realize that it wasn’t enough, might not ever be enough.

“Do you speak English, ma’am?” said the EMT, loud and slow.

“PhD,” I mumbled through teeth gritted against the pain.

“What? Do you need a translator? Trans-la-tor?”

“I have. PhD. English,” I said, tears stinging the raw gash on my cheek where that young man’s class ring had made contact. I always thought class rings were tacky.

I asked the man who had called 911 to help me gather my bags and set them in the ambulance. The EMT was trying to whisk me away—something about a sprained wrist and shock. But I insisted, and the man helped.

“Thank you, so much,” I said, openly weeping as they strapped me onto the stretcher. “Please, take. It’s sweet. You like.” I pushed a box of ice cream mochi into his hands. He tried to demur, but the EMTs lifted me into the ambulance as he stood there, holding the box of mochi as if it were some dead animal. I wondered if I would have accepted a gift from a bag lady with a broken face on the street. From a victim.

I watched the man through the rear windows as the ambulance pulled away from the curb. Just before we turned the corner, he threw the box into the trash and walked away, unburdened.

The other box of ice cream mochi melted long before I was discharged from the hospital.

Lillian Wang Selonick is a 2.5 generation Korean-Chinese and Jewish American writer and scholarly publisher living near Washington, DC. Her fiction has appeared in Passengers Journal, Obelus Journal, and in the anthologies America’s Emerging Writers and Scholastic’s The Best Young Writers and Artists in America. Find her on Twitter @LillianSelonick.

“Stolen scraps of English”. My favorite phrase in a brilliant little story.

What a fantastic story. You’re a talented writer, Lillian! Keep on writing. You are inspiring me to once again submit my own work to be published. I love how raw and real your writing is. “Stolen scraps of English” and “I always thought class rings were tacky” were two of my very favorite parts of this story. Please keep writing. I want to read more!

I love this piece, especially how you bridged the assault with a story about the mom. Please keep writing.