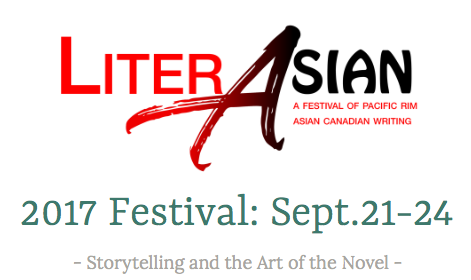 The fourth annual LiterASIAN Festival took place from September 21st – 24th 2017. Centered around the theme of “Storytelling and the Art of the Novel,” LiterASIAN 2017 authors included Leslie Shimotakahara, Terry Watada, Janie Chang, Julia Lin, Catherine Hernandez, Leanne Dunic, Jen Sookfong Lee, and Eleanor Guerrero-Campbell. Featuring an eclectic blend of emerging and established writers, each individual brought their own style and voice to speak to the festival’s theme. Currents: A  Ricepaper Anthology, dedicated to the late Jim Wong-Chu, was released as part of the year’s festival. The anthology marked the first publication by Ricepaper since its transition into a digital magazine.

Events included book launches, a panel discussion, as well as writing workshops. See below for recordings of some of the different events:

LiterASIAN kicked off on September 21, 2017 with the book launches of SCARBOROUGH by Catherine Hernandez, DRAGON SPRINGS ROAD by Janie Chang, THE CONJOINED by Jen Sookfong Lee, and SHADOWS OF THE CRIMSON SUN by Julia Lin. The event was moderated by Winnie Cheung in the Alma VanDusen and Peter Kaye room at the Vancouver Public Library.

LiterASIAN continued on September 23rd with the book launches of THE THREE PLEASURES by Terry Watada, STUMBLING THROUGH PARADISE by Eleanor Guerrero-Campbell, TO LOVE THE COMING END by Leanne Dunic, and AFTER THE BLOOM by Leslie Shimotakahara. An eclectic blend of emerging and established writers, each individual brought their own style and voice to speak to the theme of “Storytelling and the Art of the Novel.”  This session was moderated by UBC English professor and Director of the Asian Canadian and Asian Migration Studies program, Dr. Chris Lee.

Later in the evening, Janie Chang, Leanne Dunic, Jen Sookfong Lee, and Eleanor Guerrero-Campbell spoke about the delicate line between fiction and reality. The four authors detailed how their books (and writing careers) have explored the nuances of writing in such a manner, and how it is a very particular facet of storytelling.  This session was moderated by UBC English professor Dr. Glenn Deer.