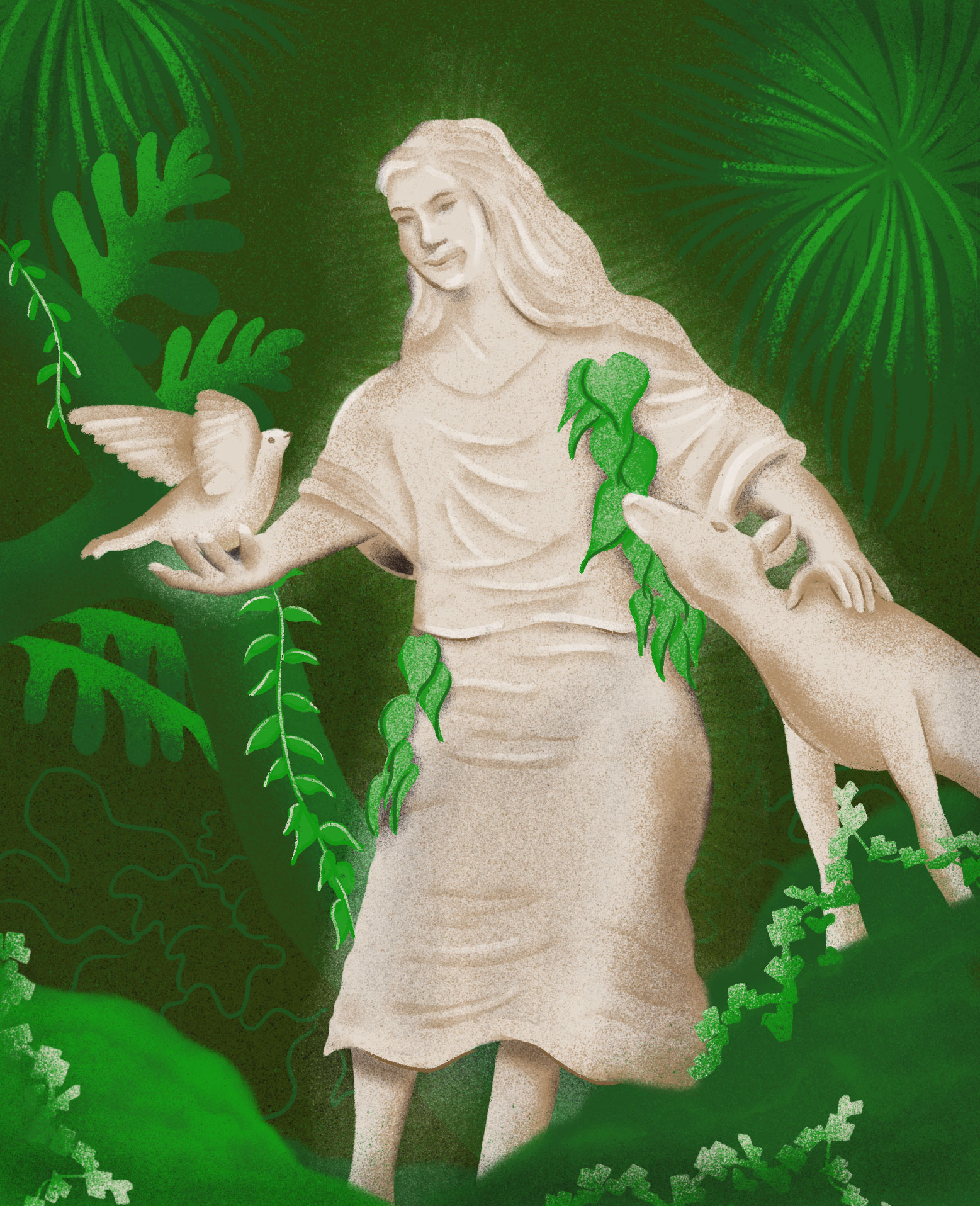 In the rare nights that I dream, I see glimpses of her. Dappled sunlight filters through the lush canopy of acacia leaves above, mottling her soft curves cast from white cement. A bird, frozen mid-landing, grazes her outstretched palm. The other hand caresses a deer from her herd, necks craned upward to dote on their beloved diwata. She stands a few yards back from the road, marking the edge of the manicured university grounds and the beginning of the untamed forest. As a child, I used to think she was a White Lady, like the stories of the famed restless spirit who roams Balete Drive. But I’ve never seen her move, not even in my dreams, her gaze always as still as her stony body.

“Just a statue,” Nanay would say, as I stared at her from the jeepney window.

The moss and soot stains from decades of diesel fumes age her beyond her years, but Nanay says she’s only a year older than me. Too young to remember my parents in starched polos and bell-bottoms, strolling the campus she now watches over. Too young to remember the marches and murders and protests and paralyzing fear that punctuated their undergraduate years. Too young to remember their fellow students and professors: Jessica, Cristina, Gerry, Rizalina, and the dozens of others who disappeared without a trace. Or, those “who were disappeared,” Nanay warns, reminding me that these activists were erased from history by a perpetrator she fears to name. Both of us know full well these violent vanishing acts—committed by a regime long ousted by a “people’s revolution,” at least according to the history books—never really stopped. Instead, authoritarian ideologies from decades past wrap their surviving tendrils around current seats of power, puppeteering figureheads that threaten any who dare whisper dissent.

I search for her, the guardian of my dreams, in satellite images from my desk half a world away. Clicking aimlessly at digitized stills of streets from my childhood, I find myself lost in a maze of half-remembered landmarks. The toned arms and sharp angles of the Oblation—measuring 3.5 meters in height to symbolize 333 years of Spanish colonization—stands as her negative image in slick bronze. The bleached facade of the old university gymnasium, its cavernous halls haunted with the screams of thousands held hostage by Japanese soldiers in the years when imperialist powers carved deep wounds into the East, cutting our countries open and calling it “liberation.” The infirmary up on the mountain, where my sister and I spent Christmas mornings hooked up to IVs as we sweated out bouts of dengue and typhoid until my parents had enough of seeing their children sickened with fever from poisoned waters and moved us across the ocean on a promise of anything better than this.

I search for her in the big box supermarkets of small-town USA and find her in coconut milk cans and styrofoam cups of instant noodles tucked away in the ethnic food aisle. I catch a glance of her distorted reflection in my high school American history textbook, short passages on Taft and Dewey surrounding an illustration of Uncle Sam, who welcomes fair-haired school teachers to an island littered with dark-skinned, full-lipped savages. I feel her gaze as I watch the waves of the Pacific return kisses from a coastline thousands of miles away. I recognize her spirit-stirring when I lock eyes with a yaya on the bus, cradling a freckled child of the Mother Country instead of her own.

When Mariang Makiling appears to me at night, I look into the fullness of her face and ask, “If you’ve been away longer than you’ve lived somewhere, can you still call that place home?”

Pamela Guerra is a writer and graphic designer from Laguna, Philippines. Her work has been featured in Nearness, Rock & Sling, Recipes For Resistance with Migrant Zine Collective, and elsewhere. She lives in Los Angeles, where she organizes with GABRIELA, an anti-imperialist Filipino women’s group. Find her online at pamela-guerra.com.

Mae Decena is a Los Angeles-based designer and illustrator. Her practice explores aesthetic philosophy and the magical mundane, as understood through generational storytelling. Her work with GABRIELA, an anti-imperialist organization for Filipino women, families, and LGBTQ+, focuses on popularizing revolutionary culture through art and uplifting local communities through education.