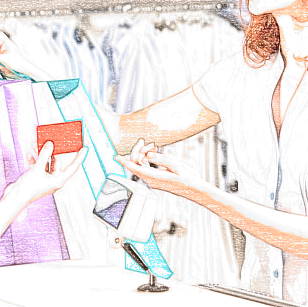 My clothes are my first line of defense. Matching the local style is an easy form of security. Safe from prying eyes and too many questions. Dressing up like this is not paranoia when it deals with an actual threat. No one would be able to pick me out as an oddity right away. It’s added protection. It would be dumb not to wear a bulletproof vest in an active conflict, right? On second thought, that idea doesn’t sit well with me. Do I really feel so threatened by a shopping mall that I consider it like walking through a warzone?

These words frighten me. Standing in front of me is a young woman dressed in the department store’s uniform. Her clothing and the store itself seem more suited for the First Class cabin of an overnight flight than a shopping centre in a suburb. Her outfit matches the high-end business fashion that flight attendants around the world wear, evoking similar questions about its design practicality. A uniform crafted to fit the most luxurious cultural standards, only giving the barest lip service to cultural identifiers. The extravagant goods around her looked like products in an airplane catalogue. Watches that tell you how much money you’ve lost per hour and scents that tell people you have means without even looking. The most expensive items you have ever seen, available even when you’re far away from Paris and London. Things people globally seem to want and which they desire to afford more than anything else.

The building has the unmistakable feel of air conditioning commonly found in such handcrafted environments. It hurts bitterly to recognize that the comfort of A/C feels more familiar to me than this whole country’s ecosystem.

The young woman’s smile reads like a professional habit rather than a genuine expression. Is she questioning me because it’s how they greet their customers? Or did she pick me out because I seem suspicious? Does she work by commission? Do they even allow people to work by commission in this country? Her expression betrays nothing but friendliness. Regardless of why she chose to speak to me, she is my problem now. I dread this deeply.

I cannot bring myself to answer her. While I fully understand her language, there is no way of answering her without giving myself away. And yet, not answering at all would be just as awkward and even suspicious. Whether on commission or not, I know that staff in this country can be overbearing to a fault. If I’m not straightforward with them, they would not leave me alone. If I’m straightforward with them, they may never leave me alone. I’m trapped.

If I had tried to fit in more, would this have happened? I had tried copying their mannerism before, albeit only briefly. On the one hand, it felt like re-learning how to ride a bike, clumsiness and all. On the other hand… It felt wrong. Where copying clothes is necessary, copying mannerisms is deceit. You wear clothes to fit the environment. Adapting to the local weather, following traditions, and cultural opinions on fashion are somewhat reasonable justifications to changing one’s style. Mannerisms are something you grow into and develop from habit. There’s a difference between playing soldier with children and faking to get a veterans’ discount. I did not want to be a walking parody of the people around me.

Even without the mannerisms, I look the part and that can be a problem. My clothes are my first line of defense because they make people comfortable, think that we’re the same. However, this also means that people would become comfortable enough to inspect me closely. Inspecting me closely means that they would start pointing out all that makes me unlike them. The more similar you are, the more vocal people would be about your differences. But if I don’t look the part, they would decide I’m not one of them long before I even notice them. Either way, it never takes long for people to realize I am raised differently. It’s a mistake to think someone like me could get away from this issue completely. I’m always set apart.

Even if I do respond in the local language, I’m doomed. She will know that I’m not like her. While the language is second nature to me, my tongue is molded differently than the locals. I can speak it and be understood easily but it marks me.

I was never ashamed of how different my tongue was. So long as I was understood by other speakers, it was fine. But the problem lies in the fact that my tongue has become a symbol of status. In fact, tongues touched by many nations have become popular in this country. Many of the rich and famous come from multicultural backgrounds which afforded them these tongues similar to mine. The country has acquired such a palate for these tongues that even those who never left their homeland try to cater to these new tastes. Is it wrong if the voices they are trying to copy were originally trying to copy them? I hear more of these foreign sounding tongues singing, preaching, and leading than the tongues I hear on this country’s streets. They had manufactured their own tongues to appear touched by lands abroad, all to build followers.

My voice sounds rich to their ears. For some, my voice sounds like a demand. They think I use my voice to signify that I demand respect and will reward those who swear fealty. Many times I have been hounded in marketplaces by people begging to hear my voice. They want my tongue to feed their bellies with a simple “yes” to their demands. They follow the curves of my every word, like directions to their deepest dreams. They make offers like they want to make a trade for my tongue. Similarly, I worry this sales associate might try to wait on me like a servant if I speak. The thought unnerves me. I am horrified by what people would do for a voice.

I am not rich. I do not grant wishes. I do not want power over anyone. In reality, when I visit my family’s homeland, I want to spend time with them. I seek to enrich my connection with my family. I want to help my family when I can. I want to learn and respect parts of my family I hardly ever see. A reunion necessitates only recognition, not demands. To demand power over any random person on the street is not the reason I go out, let alone hope for, in an area that could be considered another home away from home for me. I shudder to think of voices who use their marked status to use people, especially to take advantage of people in need.

I want to know the sales associate’s tongue and I want her to know mine. I want to feel how both our tongues are the same, yet shaped differently. Where do our tongues contact comfortably? Where do we feel the tension that sets us apart? What experiences have seasoned our tastes? I want to be able to exchange stories and jokes, not social mobility. I went off on my own so I could be part of the local crowd. Am I not allowed to be part of this country?

And yet, I still have not spoken because I have heard her tongue. Her expression is worried, like she’s burdened by all the possibilities of why I haven’t spoken. She studies me as much as I study her. We’re both puzzled. Does she know those who have demanding voices? Does she worry about her own tongue? Is her uniform a line of defense? Is A/C a comfort for her or just something manufactured? What are we supposed to say?

Klaus Tan is a recent university graduate trained in Literature, Psychology, and Philosophy. He’s spent much of his life studying Europe and Asia by book and by foot, learning about people and his own placement in the world. Much of his writing reflects such experience, leaving room for different perspectives from around the world. Born and raised in Canada, Tan is of mixed Filipino and Chinese descent with a smattering of European genes.

Anderson Lee is an artist in Vancouver, British Columbia. As a graduate of the University of British Columbia, he has spent his youth designing and writing about his Asian Canadian heritage, producing numerous short stories and illustrations for magazines and literary anthologies.  He was the editor of Perspectives Newspaper, a bilingual English-Chinese language publication.