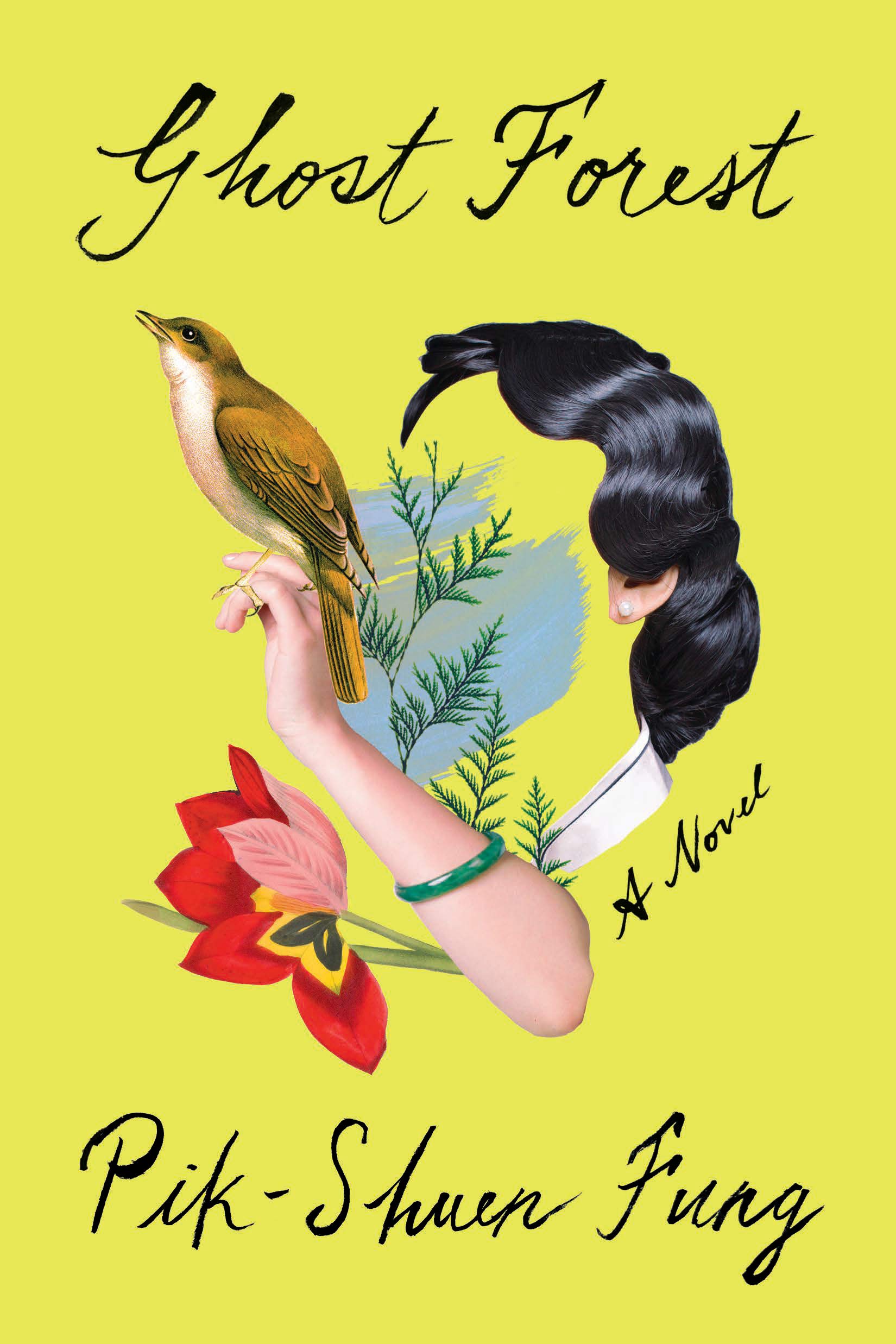 Pik-Sheun Fung makes her novel debut with Ghost Forest, delivering an experimental writing stroke with artistic mastery. The work comes right at a time when we need it most. With the wrinkles of home catching up to us deep in the pandemic and a new migration wave rippling from Hong Kong, the family tales of Ghost Forest erupt a renewed sense of urgency alongside remnants of the past. It channels themes of grief, silences, and distances in incredible ways.

I was ushered into my own childhood, reliving memory fragments and unresolved micro-traumas – the everyday family frictions that scar us for life. There is that confusing realization of son preference, a silent mark that the daughter carries with her forever in Ghost Forest. After birth, quotidian life is even more recognizable in how female bodies are gendered from infancy, such as nose-pinching.

The novel starts off with the death of the father and a bird who flies away. Fung then lures us in to the story set against the transnational backdrop of the 1997 ‘handover’/‘return’ of Hong Kong to China. During this time, many middle-class families from Hong Kong migrated to Vancouver. They were called astronaut families.

For the typical Hong Kong astronaut family household, the husbands or fathers were the astronauts (tai hung yan) searching for residency, citizenship, and economic safe-havens. After establishing the family abroad, they would return to Hong Kong to live and work for the riches that the city had to offer – thus constantly being in orbit. The women, now abroad, humorously referred to themselves as widows. As they were separated from their husbands over the ocean, they found solace in mahjong clubs and raised young children on their own, who came to be known as the satellite or parachute kids. I say typical because not all astronaut families follow this arrangement.

Ghost Forest is told through the first-person narration of the elder daughter, the protagonist of the story. We fill in gaps through our own imaginations, just as the daughter is left pondering snippets and traces of her family tales. We are kindled into a Vancouver home that is filled with three generations of maternal lineage – the maternal grandmother, the mother, and the daughters. Missing is the father, who lives and works in Hong Kong and makes annual visits to Vancouver during Lunar New Year.

Following years of childhood separation from her father, the elder daughter heads across the Pacific Ocean. She pursues an internship in Hong Kong and furthers her artistic training in China Perhaps she could kindle her relationship with her dad while learning Chinese ink painting.

As the daughter yearns to make sense of her ancestry and family in Vancouver and Hong Kong, the generational drama unfolds. The weak point is that Ghost Forest expands a lot of its energy in the midsection centering around the patriarch of the family on his deathbed. By the time we return to the three generations of maternal lineage in the tail section, the novel has lost focus on the relationships of these characters.

Nonetheless, the writing strings together a refreshingly humble style in words. We gain a lesson in aesthetic imagination in the protagonist’s artistic pursuit. Absence gives form and meaning to space, as we learn in xieyi freehand style of ink painting.

“. . . you feel the artist’s spirit . . .  How fresh, how spontaneous. Almost childlike, don’t you agree? With a single line, you can paint the ocean.”

Paralleling the artist’s brush is the writer’s own refreshing stroke at writing Ghost Forest. From family vignettes to Chinese proverbs, Fung invents a unique freehand interspersing short poems and art history to the mix. In Westernized society, words are thought to facilitate communication, understanding, and representation – just as Western oil paintings thrive on realism. Detail words in grammatically complex sentences and paragraphs, and that’s how one communicates complex thoughts and stories. Artists, today, make lengthy statements contriving words to accompany their work. Fung, on the other hand, acts with silences and space which shape familiar life marred in absences, regrets, memory gaps, and unfulfilling words.

“When I grind this ink stick, I am clearing my mind. I am preparing for the painting. Sometimes I sit here, just grinding the ink for half an hour, making space in my mind.”

Ghost Forest flourishes on many proverbial lessons. If empty space is as important to artistic form, what does silence and the absence of words offer to love? Such an insight on familiar love and the unspoken deepens when the death of the father nears. Struggling to express his heart, the dad would draw out invisible letters on his hospital bed using his fingers. The daughters challenged themselves to interpret. I was drawn into the pages where the letters were scattered, trying to decipher the word puzzle like life was on the line.

“MUST GO HOME TO HONG KONG”

Fung further plays on the overused English phrase – I love you. The daughter is intent on vocalizing it as her way of ameliorating the broken relationships. The family makes a mockery of this phrase.

I can’t recall my own family ever vocalizing I love you. Instead, there were half-hugs with silent tearful eyes at the airport departures and reunions. There is one story my daddy loved to reminisce with me – about how our family doctor misses his daughters, who were also in Canada. I guess my daddy and the family doctor in Hong Kong would bond over that in love and sorrow. Perhaps it was daddy’s indirect way of saying I miss you and love you.

Yet if unspoken words give profound meaning to love when affection is ultimately expressed, then how do silence and space augment negative and painful expressions? Fung tenses up the mood through such proverbial contradictions. At the daughter’s art exhibit, the father makes a remark after observing her painting in a long-drawn-out silence: “I think there is something wrong with you that you’re making art like this”. By alternating in how silence is used, Ghost Forest reminds us, of both, the love and wounds of familiar relationships.

Amardeep Kaur is a Hongkonger presently living in Toronto. She holds a Ph.D. in Geography and a diploma in Asian Studies. Kaur has taught courses in Sikhism and Canada-Hong Kong Migration at the University of Toronto. Much of her writing weaves experiences of different places — reflected in her essay on the Milk Tea Alliance movement in Jamhoor and in the poem “Late Night Conversations with a Cockroach” in Ricepaper Magazine.