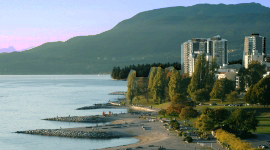 After, you would join others at the beach,
greedy for a glimpse of wreckage –
barge slammed against seawall, containers
like a copper fort bricked against sky.
Scrawl of flip-flops, kelp lacing the bike path.
A fishing vessel propped against rocks, deck at right angles to the shoreline, split open.

On TV, Merritt slept under a skim
of coffee-brown floodwater –
a city submerged, tops of trees and roofs
tickling the rippled surface. A month of rain
in two days, and farms in Abbotsford
morphed into private islands
on a vast inland lake, livestock paddling
through cranberry bogs. Zigzagged cars
strewn across the Coquihalla, a medley
of tree trunks and metal, mummified in mud.

During the storm you were on the bridge,
forcing your body against the wind like a mountaineer.
Savage sounds of banners snapping,
signs and awnings cracking, safety glass imploding.
Decades ago, you stood on this summit shredding
sheet after sheet of paper into the night ocean,
groping for courage to follo
their ghostly descent. Now you cling to life
like any stubborn old thing, clawing your way across –
headlights surging on one side,
swallowing sea on the other. The atmospheric river
breaching the banks of sky, swamping the horizon.

Evelyn Lau is the Vancouver author of thirteen books, including eight volumes of poetry. Her memoir Runaway: Diary of a Street Kid (HarperCollins, 1989), published when she was eighteen, was made into a CBC movie starring Sandra Oh in her first major role. Evelyn’s prose books have been translated into a dozen languages; her poetry has received the Milton Acorn People’s Poetry Award, the Pat Lowther Award for best book of poetry by a Canadian woman, and a National Magazine Award, as well as nominations for a BC Book Prize and a Governor-General’s Award. Her poems have been chosen numerous times for inclusion in the Best Canadian Poetry series, and she has been writer-in-residence at UBC, Kwantlen College and Vancouver Community College as well as Distinguished Visiting Writer at the University of Calgary. From 2011-2014, Evelyn served as Poet Laureate for the City of Vancouver.

Evelyn Lau’s poem is one of the shortlisted poems for the City Poems Contest for Established Poets. Watch her performance and reading of her poetry here.