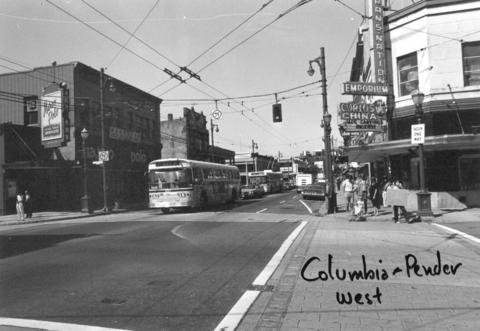 Language begins
at the crunch of siu yuk,
its rugged hide, and continues
through the rhythm of laughter,
the blues of evening vapor
among brass horns hoisting the dizzy
swing of conversation

A collection of lips
pressed against mouthpieces
while some press themselves
against others, you hear so much
more music than music,
you hear bodies knowing

their way. They move
within the moments between syllables,
their record spinning in the spaces.

Wherever alleyways and city blocks,
there is the flight of bodies,
dancers on midnight
folding into the neighbourhood,

………and forever,
when high notes settle
on these blanketfall evenings
it is no new thing, because
settling only comes
after a lay of the land.

Jeremy Chu is a Filipino-Chinese poet, writing as a guest on the unceded territories of the Squamish, Tsleil-Waututh, and Musqueam Nations. He believes that Gold Mountain is a delicate place, it is found somewhere within and without. Chu is a Vancouver City Poems Contest prizewinner and has been featured in W49, The Fourth River, and Capsule Stories.

Jeremy Chu’s poem is one of the shortlisted poems for the City Poems Contest for Emerging Poets. Watch his performance and reading of her poetry here.