Several years ago, William Tham returned to Malaysia for the summer, only to find himself suffering a fit of restlessness. He boarded a morning train to the south, leaving the capital of Kuala Lumpur behind for the sleepy towns of the south, the north, and the interior of the Malaysian peninsula. This is an excerpt from his travelogue. 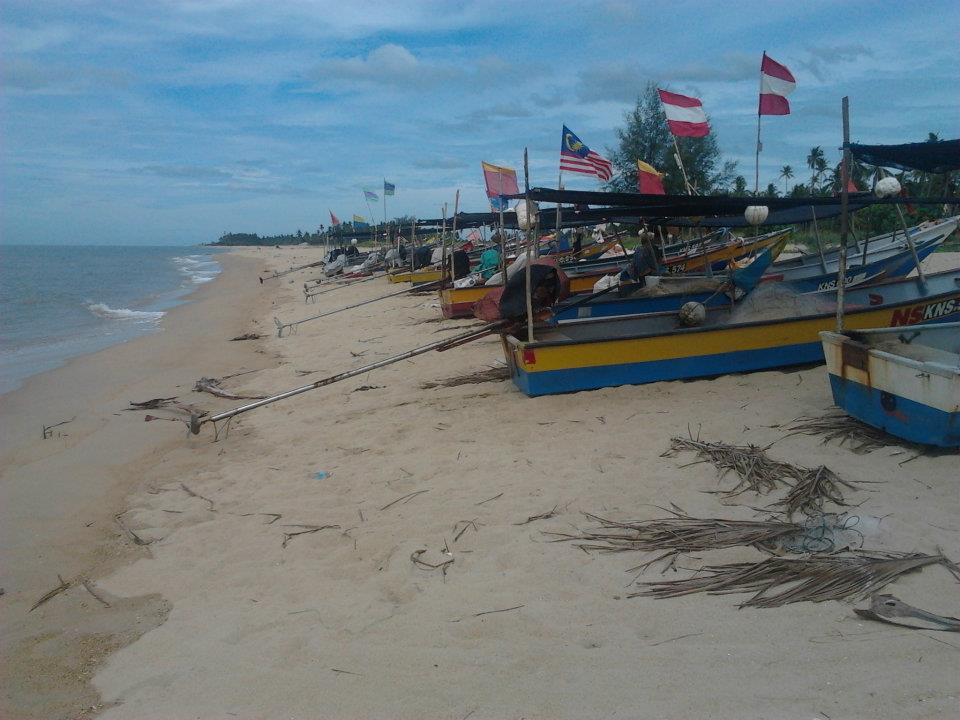 My first stop on my around-the-peninsula journey was Kajang. I left the Old KL station, on the banks of the Gombak, and a late Komuter dropped me off in Kajang, where I would spend the night in the guest room at the house owned by my aunt and uncle with their old-school British-style accents. Together with a few friends we munched on sate at Restoran Malaya in the old town, before venturing out to the foothills of Broga in a 4-wheel drive. Hallway up the hike a middle–aged man, looking just like the ones in coffee-shops sipping black coffee and fried crullers, came hobbling down. “Yau chak lo!” he yelled. I did not understand but I soon got the gist of the story-there were two robbers armed with a parang who had ambushed him, ready to waylay hikers at the summit. The man had declined an offer to get a lift back to town as he frantically flagged down other hikers, warning them of the thieves on the hilltop, before driving himself to the nearest police station.

Our attempt on Broga thwarted, we ventured instead to Sak Na Tuk temple, dominating the hill with its magnificent architecture, slightly offset by the grandiose statue of the Monkey King that loomed over the valley. There in the state of Negeri Sembilan, we posed for photographs on the steps while lighting incense, a small show of devotion to the pantheon of gods and goddesses: Buddha, Guan Yin, Guan Yun….and the temple itself was dedicated to a Malay aristocrat worshiped by early Chinese settlers for unknown reasons.

Dinner in Kajang; the food ordered in the rapid-fire Hokkien dialect, but our Indian friend only understood the word kangkung and nodded enthusiastically. The server laughed in a good-natured way and joked with him in coarse Malay. It did not occur to me then how limited those playful, fleeting moments were.

The next morning I was on the Intercity with its dozen or so carriages, blue-shirted conductors hopping in and out of the swinging doors, and I clambered on board into second-class. The train took me south, past the new stations being prepared for the new high-speed lines that would link Singapore to Kuala Lumpur, cutting through the hills and over rivers on British-built bridges, leaving Nilai and Seremban behind in the heat. We stopped briefly at Gemas, the great interchange station where the East and West Coast lines briefly met before skewering in opposite directions. I stretched my legs on the platform and returned on board until we were amidst the highlands of marshy Johor, hopping off at Kluang station, made famous by its café that the former Sultan frequented, the train aficionado journeying from his palace to the station for kaya toast.

I walked with a friend and his friends up the jogging slopes of the nearby mountain. We passed waterfalls and a Chinese man who draped himself in chains as he struggled uphill, buying Kluang’s famous biscuits on the way back and having dinner at his palatial house. He dropped me off at the station later that night, where I awaited the arrival of the night train that would take me northwards along the Jungle Railway. It arrived in due course and I tiptoed past families to my upper-level bunk, lying on my side, watching the lights vanishing as we returned to darkness.

In the night, while I slumbered, we would pass by Gua Musang, Jerantut, Dabong, those small towns slowly being forgotten in a march to progress, soon to be reduced to mere names of stations on the way up the East Coast on a rocking locomotive soon to be traversing oil palm estates instead of the receding jungles.

At daybreak we arrived at the far northeast of the peninsula, at the fluid border town of Tumpat where borders dissipated, filled with southern Thais who had probably lived there for generations. I hopped off at Station Road, having been awake for the past hour after a conductor tugged at my sock to warn me of the impending arrival at the terminus. I passed behind the imam bedecked in white who handed out his laminated scriptures, and stood at the end of the corridors by the swinging doors, standing behind the smokers as we idly watched the countryside passing by, fields of green paddy interspersed by electric cables and other trains, framed by the vermilion-gold of the awakening sky.

In Tumpat I passed by shophouses and vast fields dotted and the magnificent Wat Pikulthong with its gilded Buddhas and the awnings with carved dragons and the Thai monks bedecked in orange, their expenses covered by the King of Thailand from his palace in far-off Bangkok. For a Ringgit I munched on sate from the roadside, while the portrait of the King gazed back at me from a calendar. Up north, it seemed that all the crime and desperation of the cities had vanished. Even the menacing snarl of a motorcycle was just that-a bike taking a man to work.

I hopped on a bus and was soon deposited in Kota Bharu, near the Pasar Siti Khadijah and the various palaces that once housed the royal family, which had since decamped to an isolated mansion surrounded by rows of Chinese shop-houses. I set up camp in a hostel with its rustic wooden walls and open window to the street, and began my trek through the town. I spoke so casually to policemen and Tourism Malaysia staff and snack-sellers under the great dome of the Pasar, all of whom greeted me with a laid-back enthusiasm.

I eventually wound up on the shores of the Beach of Passionate Love, recently renamed the Moon-Lit Beach, and sat on a fallen palm tree near the gaudy fishing boats and the feral goats, staring at the aquamarine sea which stretched into the vastness of the Pacific. And on the far end of that same ocean lay the city I would return to at the end of the summer, a different world removed from the old one by the endless waves.

After five hours on a rickety bus with broken air-conditioning, I finally I reached Georgetown on the West Coast island of Penang, getting off at the terminal after the yellow ferry had crossed the narrow strait. I found myself in the big house on Cantonment Road where my granduncle lived. In the Art-Deco mansion my great-grandmother had once paced, a Straits Chinese who frequently included Malay words like ‘sabun’ or ‘barangkali’ in her daily speech. Generations of the clan left their traces in faded photographs, surviving the Japanese Occupation in the panic rooms. Over there I toured the Old Town with its clan buildings and refurbished roads, walking down the Esplanade and buying tau sar pneah at inflated sums, singled out by the Hokkien shopkeepers who knew I was no local.

I called up friends who were usually found studying medicine in Scotland, England, and Ireland, and we visited the hilltop temple and the kopitiams. But even then we were uneasy with with each other. Even so I found myself with fond memories of the island, and just wanted to call it home. But the illusion was shattered not long later on the beach at Batu Ferringhi, as I watched a wedding photo-shoot on its gleaming sands. Sooner or later it was time to leave. Regretfully I climbed up the steps and back to the bus stop on the roadside, waiting for the return to Georgetown.

The restlessness continued after that. I went to Ipoh a few weeks before I returned to my studies. It was muggy and I had just got off the electric train at Ipoh Station, en route to Anson Bay where my grandparents lived. I met with a university friend there, where he ordered food in reasonable Cantonese and we ate chicken rice and pudding near the city’s magnificent station. In my broken Cantonese I bought a bus ticket for Anson Bay. It used to be one of the most bustling towns in Perak. I supposed it still was. We departed, and it was filled with old people clutching purses and young men with dyed-orange hair, going home for the weekend from their technical college. Inside the bus everybody was speaking Hokkien.

The bus took me past the limestone hills and through coastal roads, where at times the undulating arcs of the Perak River appeared. And it finally arrived at the old town with its famous Leaning Clock-Tower and bustling shop-houses. In the past, I would be greeted by the swallows nesting on the ceilings of the five-foot ways where old offices smelling of mothballs were stuffed with one-cent coins bearing the head of George V. But for the most part I simply stayed put and chatted with my grandparents in my poor Cantonese. It struck me that I had never been able to communicate with them properly.

Before leaving, I toured the town with my aunt, who had never forgotten her adventures seeing the world as a student in Australia. She took me to the orchards across the river, where the old boatmen charged two ringgit for a one way journey, where workers collected fruits and vegetables and sent them across the river for sale. She told me that she tried to bring her nieces, born and bred British, to see the orchards, but they preferred to stay cocooned in her air-conditioned house instead.

That trip to Anson Bay confused me, lingering in my memory. It was there that my mother had grown up. Even after relocating to another part of the world, it struck me as odd that so many of Malaysians had the same heritage-the old kampongs, the shop-houses and the long bus rides through nowhere, but we were all scattering, moved to new continents and cities and lives.

My aunt lit up that morning, talking about the time when her Western friend had visited the town, and how they had convinced the guard at the foot of the Clock-Tower to let them in, past the whirring gears and the clock face, to look out over the town square. But that was a long time ago.

I made a few other journeys, but I have nothing much to say about them.